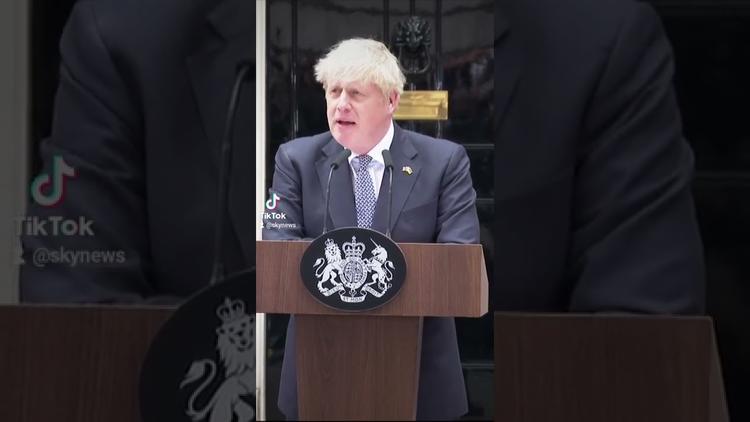 Ann Arbor (Informed Comment) – By Trumpian standards Boris Johnson is a boy scout, The British prime minister, who on Wednesday said he would resign, was trailed by the sort of scandals that wouldn’t even be noticed in corrupt US politics. Johnson went to a party in 2020 after he forbade the British to hold parties because of COVID-19. He was later fined, along with some members of his party.

So Boris Johnson is a hypocrite.

In some ways his biggest failure was also his biggest success. He ushered in Brexit, the UK exit from the European Union, which was just as costly for ordinary Britons as level-headed economists has predicted. The move exacerbated Britain’s stagflation, the worst case of this phenomenon since the 1970s. Unions are on strike or planning to be across the country.

Article continues after bonus IC video
Sky News: Boris Johnson has said he will be resigning

Johnson was behaving a little bit like Donald Trump, refusing leave office no matter how many in his own party wanted him to go.

So his own cabinet ministers and other officials in his government just began resigning en masse, with 50 of them gone on Wednesday.

Johnson eventually saw the writing on the wall.

I was struck on reading this story by the contrast with the US Republican Party, which has clung to Trump no matter how he behaved.

Even when Trump orchestrated a mob to invade the Capitol and to kill or kidnap his Vice President, overthrowing the lawfully elected US government, Republican party leaders Mitch McConnell and Kevin McCarthy only briefly blamed Trump in public, but then quickly backed off when they discovered that Trump remained popular with the Republican base.

The US presidential system is different from the British prime ministerial one, and there is no tradition in the US of resigning over issues of honor. To be sure, some of Trump’s appointees, such as Secretary of Defense Jim Mattis, did resign over his erratic behavior, as when he abruptly permitted Turkiye to invade Syria and attack the US allies, the Syrian Kurds.

But mostly grown adults with a well-functioning moral compass served alongside Trump without blowing a whistle on his crimes and without going public with what they saw.

The British Conservative or Tory Party proved itself still sane enough to get rid of an increasingly unpopular leader who was blithely breaking the law and leading the country down the path of ruin. The US Republican Party failed that test.