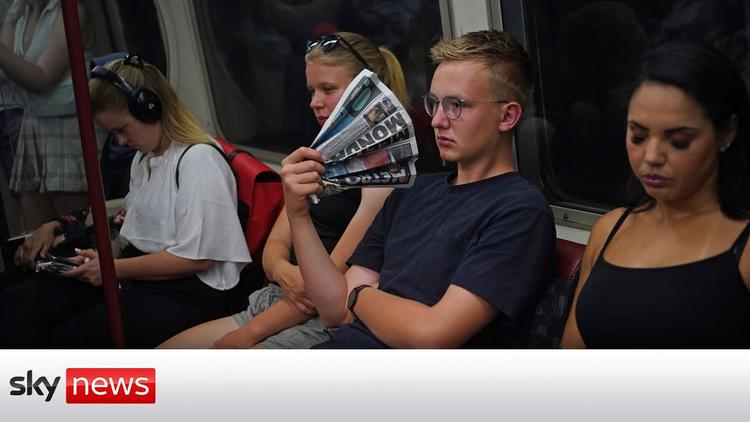 Ann Arbor (Informed Comment) – We will probably overshoot the UN goal of limiting extra global heating from the climate emergency to 2.7 degrees F. (1.5C), but Mother Nature is telling us that even just our current 1.8 to 2.16 (1C – 1.2C) degrees F. increase since 1850 is already enough to do major damage to the very infrastructure of civilization.

Europe is the latest exhibit in how dramatic are the changes that our bad habits, like driving internal combustion engine cars or heating homes with coal, are wreaking on the earth.

Worryingly, the Royal Air Force’s largest air base, Brize Norton, has had to be closed because the runway has melted according to CNN. This is like a disaster movie, only the characters can’t escape the climate apocalypse by jumping in a plane and flying to the Himalayas. The planes aren’t taking off. It can, by the way, also get so hot that the air thins out and planes can’t get enough lift to take off, a problem that has occasionally plagued Phoenix, Az.

Then on Monday, London’s Luton Airport had to be closed because the torrid heat had caused a section of the tarmac to buckle and lift.

Clearly, damage to airports is a severe security concern, and the RAF was careful to underline that it still has plenty of planes that can fly. But if this kind of thing happens at a couple of degrees of extra heat, what will it be like if we recklessly soar to 3.6 degrees F. (2C)? The increases in danger are not serial, 1, 2, 3, 4. They are kaleidoscopic and sometimes exponential (2, 4, 8, 16, 32).

Rick Noack and William Booth at WaPo run down the litany of other disasters in Britain. The rails carrying trains are having to be inspected for warping as the heat in the UK climbs to a record 106 degrees F. (41C). Wales just recorded the highest temperature it has ever seen. The trains are having to go extra slowly. People are wrapping the Hammersmith Bridge in silver insulation to prevent the heat from making its iron support beams crack.

I lived near Hammersmith in the antediluvian year of 1983. It was freezing in May, and we had to turn on the radiator. The UK has been many things, but swelteringly hot has seldom been one of them. This summer, the British government (well, the parts of it that aren’t the sleepy Boris Johnson) has issued an unprecedented level red heat alert for Monday and Tuesday of this week.

The Met (Meteorological) Office of the UK government said,

“We hoped we wouldn’t get to this situation but for the first time ever we are forecasting greater than 40°C in the UK. “Climate attribution scientist at the Met Office, Dr Nikos Christidis, said “In a recent study we found that the likelihood of extremely hot days in the UK has been increasing and will continue to do so during the course of the century, with the most extreme temperatures expected to be observed in the southeast of England.

“Climate change has already influenced the likelihood of temperature extremes in the UK. The chances of seeing 40°C days in the UK could be as much as 10 times more likely in the current climate than under a natural climate unaffected by human influence. The likelihood of exceeding 40°C anywhere in the UK in a given year has also been rapidly increasing, and, even with current pledges on emissions reductions, such extremes could be taking place every 15 years in the climate of 2100.”

People in London mostly don’t have air conditioning, so families living in apartments (flats) are like buns being cooked in an oven.

Although 2 or 2.7 degrees Fahrenheit doesn’t sound like very much of an increase, that is a growth in the global average surface temperature. To get it, you had to heat up everything– the oceans, the plains, the mountains. That average, world-wide temperature increase takes an enormous amount of energy. The energy is captured from the sun’s rays, which used to just radiate back out into space after striking the surface. Carbon dioxide and other heat-trapping gases, though, keep more of the sun’s heat on earth. In fact, putting billions of tons of CO2 into the atmosphere by burning gasoline, methane gas and coal is like setting off strings of atomic bombs in the heavens. Makes it hot.