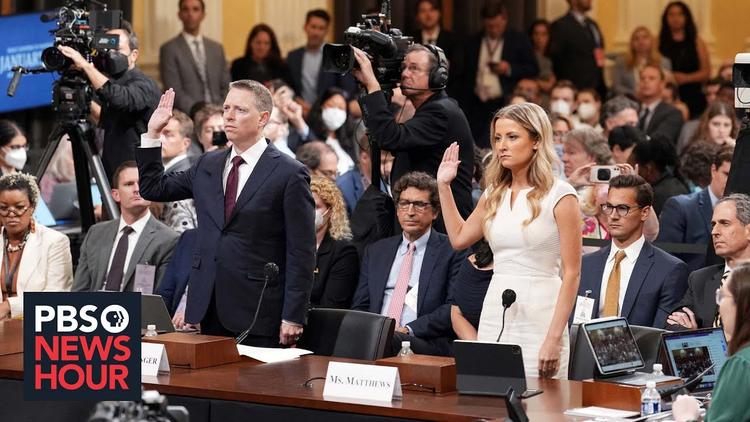 Oakland, Ca. (Special to Informed Comment) – January 6 was Donald Trump’s ultimate, cathartic, lifetime adrenalin high. He enjoyed it so much from the White House dining room that it took more than three hours for his staff and family to talk him down and out of it. He had calculated and stage-managed that day many months in advance. Rather than call on the National Guard and Department of Defense to defend the Capitol against the marauders, he mustered and sent an army of American Fascists to storm the Capitol in his name, for a serious attempt to overturn the 2020 Election and remain in power. We knew all that before the most recent hearing. The “how” we learned was dramatic and shocking.

Mike Pence effectively invoked the 25th Amendment from deep in a parking garage of a Senate Office Building to assume the presidential act of ordering the retaking of the Capitol by the Defense Department, FBI (which we learned has their own troops), National Guard and other agencies. Trump had willfully not called on them to defend the Capitol even as his own senators’ and vice president’s lives were at urgent risk. It is chilling to imagine Pence staff members making goodbye calls to loved ones, as if they were on a 9-11 plane going down. They were pretty sure they were going to die. It was that close.

We got insight into the White House speechwriting and editorial process, with Ivanka managing the teleprompter for the post-riot speech. We saw Trump’s juvenile, petulant tantrums over things he didn’t want to say like, “The election is over.” And that “yesterday” is a tough word for him. One-syllable words only please.

Those old enough to recall Watergate remember the notorious 18+ minute gap in Richard Nixon’s tapes that his secretary Rosemary Woods may or may not have accidentally erased with some secretarial gymnastics. The hour-long gaps in the Trump White House phone, text and visitor logs may prove just as damming. Both were deliberate desecrations of incriminating evidence.

They really WERE trying to hang Mike Pence at Trump’s prompting. Trump pleaded with Alabama Senator-Coach Tommy Tuberville to overturn the election, as he was literally fleeing for his life. He was so myopic as to lobby for overturning the Election, while the insurrection while it was in progress, with the lives of his sycophants being threatened. And Fox News encouraged the insurrection with their expressed disappointment of Pence in real time.

Article continues after bonus IC video
PBS NewsHour: “What we learned on Day 8 of the Jan. 6 hearings”

This is also the story of many brave people who summoned the courage to come forward and testify, in a literal and spiritual sense of the word. Liz Cheney and Adam Kinzinger shall go down as two of the most honorable Americans in history for their willingness to sacrifice their political careers to stand up to the MAGA mob, and defend the Constitution. I hope they call for the expulsion of their treacherous Republican colleagues who supported overturning the Election, and conspired with the insurrectionists by giving recon tours ahead of that ugly day of infamy. Other lifelong Republicans have risked their careers spurred by a variety of motivations.

Matthew Pottinger, Trump’s former Deputy National Security Adviser quit when he saw the chaos on TV and Trump’s tweet that, “Mike Pence didn’t have the courage that should have been done to protect the Constitution.” He added, “What we needed was a de-escalation not fuel to the fire.” Sarah Matthews the Deputy Press Secretary said that tweet was the last thing that was needed, giving rioters the green light to stop the count and hang Pence. She testified, “He should have been telling them to go home and leave. We’ve seen the impact his words have on his supporters, like pouring gas on the fire.” Cassidy Hutchinson was broken by, “watching the Capitol Building being defaced over a lie.” At long last these people showed a sense of decency.

The Committee scored some major production accomplishments, unusual for Congressional Hearings. This was not your Uncle Herman’s Watergate Hearings of talk, talk, talk. With graphic visual aids, we saw what Trump actually watched on Fox News from the White House Dining Room with real time stamps, while his army of Proud Boys and others stormed the Capitol in his name. He ate junk food with ketchup in front of the TV, as his troops came dramatically closer to murdering Members of Congress than we knew before. And he LOVED every minute of it. He knew what was coming and had his popcorn ready.

Now we know it was staged months in advance by his various armies, which set up military-style communications networks, and gave us insight into their mindset and trigger mechanisms. Insurrection organizers monitored Fox News and Trump’s Twitter account for instructions. He WAS commanding an army to stop the transition process and stay in office. He and his staff of crazies explored every possible avenue, and executed a thorough strategy to find and fabricate votes for him that never existed. There are lucid arguments that all players in the Stop the Steal movement should be prosecuted under RICO statutes.

. Kinzinger eloquently summarized the dynamic saying, “The mob accomplished President Trump’s purpose, so of course he couldn’t intervene,” and added, “We as an American People must all agree on this: Donald Trump’s conduct on January 6 was a supreme violation of his oath of office, and a complete dereliction of his duty to our nation. It is a stain on our history . . .” The witnesses were not traditional adversaries of Trump, but his own former allies and supporters, shocked into “a sense of decency at long last.” Through various paths of recognition, they came to see the magnitude of his destruction, and intent for prosecuting a Civil War to shred the Constitution and destroy the Republic. The presence of so many thoughtful Republicans strengthened the case mightily for Justice Department prosecution of Trump, and those who actively supported the insurrection.

Twitter didn’t suspend Trump’s account until two days later, when it was clear he was using their platform to prosecute the overthrow of the U.S. Government, as if he had not been before. After enabling and empowering him from the beginning, giving that platform the outsized importance that they craved, Twitter finally said, “We have permanently suspended the account due to the risk of further incitement of violence.” That was followed by a collection of verbal garbage about how their platform “exists to enable the public to hear from elected officials and world leaders directly.”

Josh Hawley was a cheerleader for the insurrection going in, but ran like a coward when they were bearing down on him. He should be expelled from Congress for actively supporting the overthrow of the U.S. Government along with Ted Cruz, Mo Brooks, Marjorie Taylor Greene, Matt Gaetz, Mo Brooks, Louie Gohmert, Andy Biggs and Scott Perry, who asked for pardons before Trump left office. Asking for or accepting a Presidential pardon carries an implicit admission of guilt. The 139 House members who voted to NOT certify the Election should also be expelled for sedition, though we know censure is the best we can hope for.

Trump’s immediate reaction to the events of the day: “Mike Pence let me down.” We had a Franken-moron as president for four years. Will the hearings, not aired on Fox News and other right wing outlets, have an impact on Republicans? For most GOP operatives and elected officials, the MAGA echo chamber drowns out any message not on Fox News. While effective, the Hearings have not changed the willingness of Republicans to vote for Trump or made a dent in their support for him. The most that can be said is that they may have a new awareness of how unpopular he is with everyone else.