Appearing with a shotgun and a smirk, Greitens leads the hunt for RINOs, shorthand for the derisive “Republicans In Name Only.” Along with armed soldiers, Greitens is storming a house under the cover of a smoke grenade.

“Join the MAGA crew,” Greitens says in the video. “Get a RINO hunting permit. There’s no bagging limit, no tagging limit and it doesn’t expire until we save our country.”

The ad comes from from a candidate who has repeatedly found himself in controversy, having resigned as Missouri’s governor amid accusations of sexual assault and allegations of improper campaign financing that sparked an 18-month investigation that eventually cleared him of any legal wrongdoing.

The political ad was also launched – and quickly removed – from Facebook and flagged by Twitter at a time when the nation is still coming to terms with the insurrection at the U.S. Capitol and reeling from mass shootings in Tulsa, Oklahoma, Uvalde, Texas, Buffalo, New York and Highland Park, Illinois.

The ad continues to circulate on YouTube via various news sources.

In his 2016 gubernatorial ads, Greitens appeared firing a Gatling-style machine gun into the air and using an M4 rifle to create an explosion in a field to demonstrate his resistance to the Obama administration.

What Greitens’ ad represents, in our view, is the evolution of the use of guns in political ads as a coded appeal for white voters.

While they might have been a bit more ambiguous in the past, candidates are increasingly making these appeals appear more militant in their culture war against ideas and politicians they oppose.

Guns as a symbol of whiteness

As communication scholars, we have studied the ways that white masculinity has influenced contemporary conservative populism.

We have also examined the ways that racial appeals to white voters have evolved under the GOP’s Southern strategy, the long game that conservatives have played since the 1960s to weaken the Democratic Party in the South by exploiting racial animus.

In some of our latest work, we have examined the ways that guns have been used in campaign ads to represent white identity politics, or what political scientist Ashley Jardina has explained as the way that white racial solidarity and fears of marginalization have manifested in a political movement.

Symbolically, guns in the U.S. have historically been linked to defending the interests of white people.

As a result, the right to bear arms was never imagined by the founders to be an individual liberty held by Indigenous people and people of color.

As illustrated in Richard Slotkin’s book “Gunfighter Nation: The Myth of the Frontier in Twentieth-Century America,” the popular film and literary genre of the Western glamorized white, hypermasculine cowboys and gunslingers “civilizing” the wild frontier to make it safe for white homesteaders.

Drawing from this lore, contemporary gun culture romanticizes the “good guy with a gun” as the patriotic protector of the peace and a bulwark against government overreach.

Contemporary gun laws reflect a historic racial disparity concerning who is authorized and under what circumstances individuals are allowed to use lethal force.

For example, so-called “stand your ground” laws have been used historically to justify the killing of Black men, most notably in the Trayvon Martin case.

Gun control advocates Everytown for Gun Safety have found that homicides resulting from white shooters killing Black victims are “deemed justifiable five times more frequently than when the shooter is Black and the victim is white.”

Featuring a gun in a political ad has become an easy way to get attention, but our research has found that its meaning has shifted in recent years.

In a 2010 race for Alabama agriculture commissioner, Dale Peterson was featured in an ad holding a gun, wearing a cowboy hat and talking in a deep Southern drawl about the need to challenge the “thugs and criminals” in government.

Though Peterson placed third in his race, political analysts like Time magazine’s Dan Fletcher raved that he created one of the best campaign ads ever.

She took the use of guns in political ads even further by appearing at a backyard range and firing a machine gun, pistol, AR-15 and a revolver in the same ad.

Though she gained attention for her provocative tactics, Gorman eventually lost to Ben Quayle, son of former Vice President Dan Quayle, in a 10-candidate primary.

Aside from the shock value, guns in ads became a symbol of opposition to the Obama administration.

For instance, in 2014, U.S. congressional candidate Will Brooke of Alabama ran an online ad in a Republican primary showing him loading a copy of the Obamacare legislation into a truck, driving it into the woods and shooting it with a handgun, rifle and assault rifle.

Not done, the remains of the copy were then thrown into a wood chipper. Although Brooke lost the seven-way primary, his ad received national attention.

The call to defend a conservative way of life got increasingly bizarre – and became a common tactic for GOP candidates.

Well before Greitens, U.S. congressional candidate Kay Daly from North Carolina fired a shotgun at the end of an ad during her unsuccessful campaign in 2015 asking supporters to join her in hunting RINOs.

Before he drew the ire of Trump, Brian Kemp climbed the polls in Georgia’s race for governor in 2018 with an ad titled “Jake” in which he interviewed his daughter’s boyfriend.

Holding a shotgun in his lap as he sat in a chair, Kemp portrayed himself as a conservative outsider ready to take a “chainsaw to government regulations” and demanding respect as his family’s patriarch.

The ads of the most recent cycle build on this development of the gun as a symbol of white resistance.

Conservative GOP Rep. Marjorie Taylor Greene, from Georgia, ran an ad for a gun giveaway in 2021 that she made in response to what she claimed was Biden’s arming of Islamic terrorists as well as Speaker of the House Nancy Pelosi’s allegedly sneaking the Green New Deal and other liberal legislation into a budget proposal.

Firing a weapon from a truck, she announced she would “blow away the Democrats’ socialist agenda.”

Surrounding himself with soldiers, Greitens goes further than those before him in this latest iteration of the Republican use of guns.

But his strategy is not out of the ordinary for a party that has increasingly relied on provocative images of violent resistance to speak to white voters.

Despite the violence of Jan. 6, conservatives are still digging their own trenches. 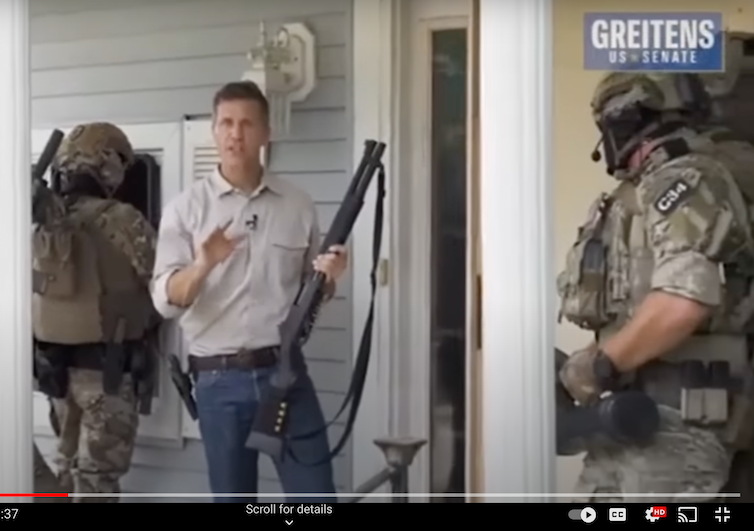 Eric Greitens poses with a high-powered rifle and commandos in a political ad.
Eric Greitens