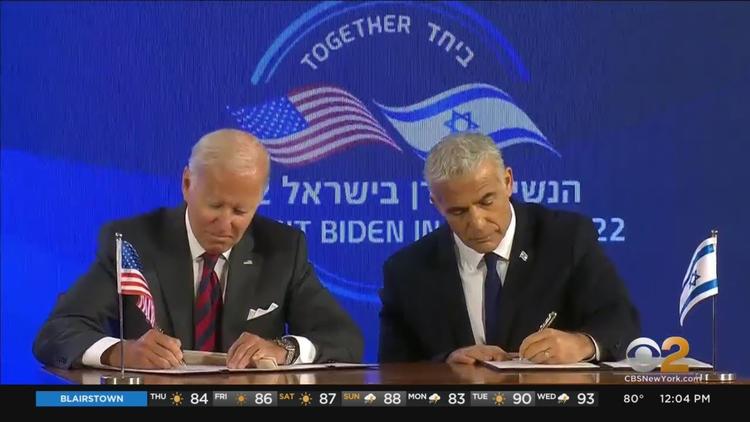 Ann Arbor (Informed Comment) – The Israeli newspaper Arab 48 reports that widespread protests broke out on Thursday in the Israeli-Occupied Palestinian West Bank against the planned visit on Friday by US President Joe Biden to Bethlehem, with residents staging demonstrations and raising black flags. They chanted against US one-sidedness in backing Israel’s actions, and carried posters of Shireen Abu Akleh, the Palestinian-American journalist who was shot dead by an Israeli sniper, as well as posters denouncing Israeli Apartheid policies in the Palestinian territories.

Palestinian organizations also denounced the The Jerusalem U.S.-Israel Strategic Partnership Joint Declaration signed on Thursday between Biden and Israeli Prime Minister Yair Lapid, which they said constituted an act of enmity against the Palestinian people and its rights. They called for Biden’s visit to Bethlehem to be canceled, given the American marginalization of the Palestinian cause.

The Strategic Partnership Declaration showers billions of dollars on Israel for security cooperation with the US and attacks the nonviolent movement to Boycott, Divest from, and Sanction (BDS) Israel for its Apartheid measures in the Palestinian territories.

The declaration pledges the US to castigate Hamas, which runs the government of the Palestinian Gaza Strip, as nothing but a terrorist organization. It continues, “The countries condemn the deplorable series of terrorist attacks against Israeli citizens in recent months and affirm the need to confront radical forces, such as Hamas, seeking to inflame tension and instigate violence and terrorism. President Biden reaffirms his longstanding and consistent support of a two-state solution and for advancing toward a reality in which Israelis and Palestinians alike can enjoy equal measures of security, freedom and prosperity. The United States stands ready to work with Israel, the Palestinian Authority, and regional stakeholders toward that goal. The leaders also affirm their shared commitment to initiatives that strengthen the Palestinian economy and improve the quality of life of Palestinians.”

In other words, Biden is a hapless bystander to Israeli policies toward Occupied Palestinians and offers only lip service “support” for a two-state solution. In the meantime, Washington is willing to kick in a little money to bribe the Palestinians into accepting their status as a people without rights, living under an alien military government, who are seeing their best land systematically stolen from them by the Israelis.

Arab 48 continues that one rally in Ramallah turned into a march through the city, as the demonstrators rejected Biden’s visit to the Palestinian territories, raising placards rebuking the notion of accepting “economic peace” in exchange for their political rights. They carried slogans like, “No to economic “peace,” yes to the right of return and independence.” A similar protest was staged in Nablus, demanding a boycott of Biden and calling on the Palestinian leadership to refuse to meet with him.

In contrast to the joint US-Israeli Jerusalem declaration, the Biden administration and the Palestine Authority were not able to agree on joint language. President Mahmoud Abbas and President Biden will each issue their own statements. The Palestine Authority is said to be annoyed with Biden’s focus solely on economic issues when it comes to Palestinians, and his administration’s attempts to integrate Israel into the Middle East without any political benefit for the Palestinians.