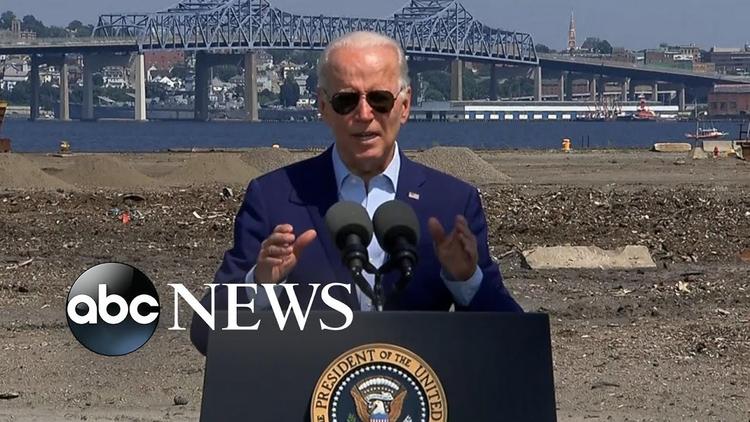 Ann Arbor (Informed Comment) – President Joe Biden announced on Wednesday that he would use executive orders and appeal to emergency measures in addressing what he caled the “climate crisis,” deploying among other tools the Federal Emergency Management Agency (FEMA).

“And in the coming weeks, I’m going to use the power I have as President to turn these words into formal, official government actions through the appropriate proclamations, executive orders, and regulatory power that a President possesses. (Applause.)

And when it comes to fighting the climate change — climate change, I will not take no for an answer. I will do everything in my power to clean our air and water, protect our people’s health, to win the clean energy future.”

That said, Mr. Biden stopped short of declaring a national federal climate emergency, perhaps worried that the reactionary Supreme Court might strike down too broad an assertion of presidential powers, but confident that it would not intervene in a more limited and targeted set of emergency actions. He may have taken a lesson from his attempt to use the Occupational Safety and Health Administration (OSHA) to require masks at workplaces during the pandemic, an entirely reasonable measure that a Trump-appointed, wholly unqualified judge struck down.

On Wednesday, he did not appear to announce any specific new step he plans to take, mostly speaking about already-in-the-pipeline measures and funding, some of it from last fall’s Infrastructure Bill. He did, however, underline progress made and laid out his rationale for deploying presidential power on this issue.

Biden began by saying, “Climate change is literally an existential threat to our nation and to the world. So my message today is this: Since Congress is not acting as it should . . . this is an emergency. An emergency. And I will — I will look at it that way.”

These two claims seemed to be his legal basis for authority to deal with the climate emergency. He pointed out that extreme weather events in the US cost $145 billion last year. He said once in a century droughts are now occurring every few years. He pointed to wildfires in the West that have destroyed 5 million acres. Sounds like an emergency and a clear and present danger of the sort FEMA can be mobilized to address.

Then Biden played his high card: “Our national security is at stake as well. Extreme weather is already damaging our military installations here in the States. And our economy is at risk. So we have to act.”

This is the most compelling argument he could make. Courts are extremely reluctant to intervene on an issue where the president has declared it is a matter of national security. He should do more of this, since it is way more than just military bases that are threatened. The harbors used by the US Navy are threatened by sea level rise and hurricanes. The landing strips of US Air Force bases are in danger of cracking or melting, just as happened to the RAF this week in Britain.

Biden touted the way the Brayton Point coal plant has been closed and the facilities will now be used to manufacture 248 miles of high-tech, heavy-duty subsea cables that will “tie offshore wind farms to the existing grid.”

The Biden administration has opened large tracts of federally controlled waters off the country’s shores to the construction of wind farms. One of the companies whose bid was approved is Vineyard Wind, the CEO of which was in attendance, and whom Biden praised for using union labor. Mr. Biden has set a goal of having 30 gigawatts of offshore wind by 2030, and is seeking to power 20 million homes from that source.

Biden waxed poetical about his goosing of the offshore wind industry, which is advanced in the UK but barely getting started in the US:

“Almost 100 wind turbines going up off the coasts of Massachusetts and Rhode Island with ground broken and work underway.

We’re going to make sure that the ocean is open for the clean energy of our future, and everything we can do — give a green light to wind power on the Atlantic coast, where my predecessor’s actions only created confusion.

And today we begin the process to develop wind power in the Gulf of Mexico as well for the first time. A real opportunity to power millions of additional homes from wind.”

Biden also made a fair point when he said that putting insulation into existing buildings and generally weatherizing them, which will allow them to use less energy for heating and cooling, is an important tool in reducing carbon dioxide emissions. One study found that 90% of US homes are under-insulated, and I think 25% of buildings have no insulation at all. Neal Dhanesha at Vox makes the extended case for weatherizing US buildings as a major step toward zero carbon, since buildings account for 40% of US energy consumption, and over half that is just heating and cooling them.

Biden pointed out, “An Infrastructure Law that your members of Congress have delivered includes $3.1 billion to weatherize homes and make them more energy efficient, which will lower energy cost while keeping America cool in the summer and warm in the winter, and not using too much energy.”

He said that his Labor Secretary, Marty Walsh, will inspect workplaces for heat levels in the summer and has already surveyed 500 of them, setting standards for when it is too hot to expect workers to do their jobs. That is, companies will need the funding in the Infrastructure Bill to up their game on weatherizing workplaces.

Unfortunately, mixed in with Biden’s more praiseworthy support of green energy were silly ideas like “carbon capture” (which does not work at prices that would make sense and would be very dangerous if it did) and building new nuclear plants, the concrete for the construction of which is a major carbon emitter and which take billions of dollars and many years to complete. A wind or solar farm can generate as much electricity and can can be put up with much less cost and much less carbon investment up front in only 18 months.

Most of the truly green projects he talked about yesterday are already in train, and they are consequential even if they will fall short in themselves of getting us to zero carbon by 2050. Apparently in the coming weeks we’ll hear about new initiatives, and it will be as nervous-making as an early Fast and Furious film watching to see if Biden can and will outmaneuver conservative jurists and the Oil and Coal lobby in Congress with his fountain pen.