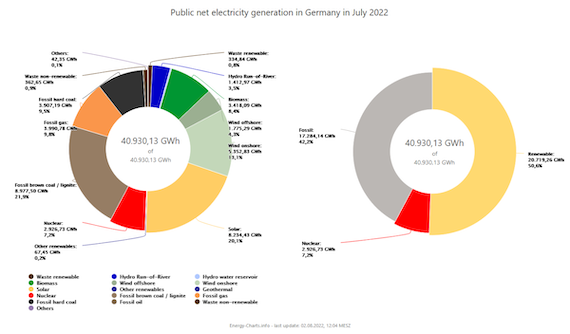 Photovoltaic systems in Germany generated a new record level of electricity in the month July 2022, the pv magazine reported.

Solar PV arrays produced 8.23 ​​terawatt hours (TWh) of power, accounting for roughly one fifth of the country’s net electricity generation and also marking the third record month in a row for photovoltaics, according to data from the Fraunhofer Institute for Solar Energy Systems (ISE).

Only Germany’s lignite-fired power plants generated more electricity that month, at almost 9 TWh for a 21.9 percent share. The country’s total renewables share reached 50.6 percent in July. In May PV generation reached a new high of 7.7 TWh and in June, PV power exceeded the 8 TWh-mark for the first time.

“It’s quite unusual for photovoltaic systems to generate more electricity than in June, but it helped keep the electricity price stable,” commented Bruno Burger, head of the Fraunhofer ISE’s Energy-Charts.

At some 315 [$323] euros per megawatt hour (MWh), however, the day-ahead exchange price for electricity was around eight times higher than a year ago. German electricity prices are currently in the European mid-range, higher than the 115 [$117.66] euros per MWh in Sweden but below the more than 400 euros [$409] per MWh currently prevailing in France.