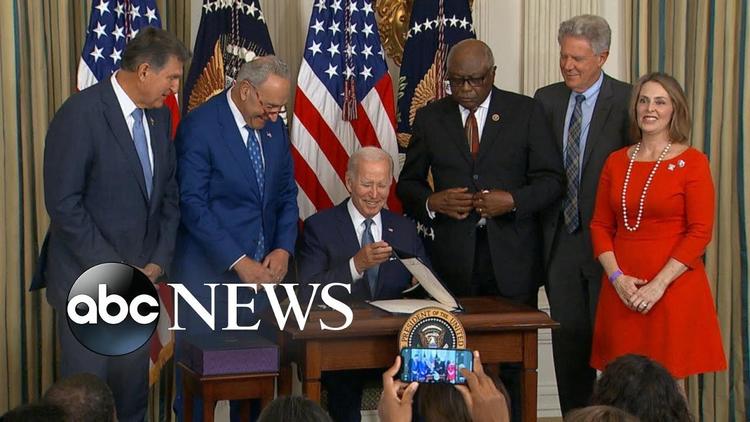 Ann Arbor (Informed Comment) – Thinking of buying an electric car? With the signing by President Biden yesterday of the Inflation Reduction Act, it is a great time to make the move from expensive and destructive gasoline to a much cleaner electric vehicle. But the rules on the $7,500 federal tax break for buying a new EV are in flux now. There is now a cap on the tax rebate so that a couple filing jointly who make $300k or more a year are not eligible.

One universal good piece of news is that a tax credit is available on the cost of installing a fast charger in your garage. You can charge your EV with household electricity overnight, but a faster charge is nice. If you have solar panels on your roof, the fast charger will allow you to recharge during daylight hours so that the electricity is as clean as can be, and completely free. Sunlight doesn’t cost anything.

The Treasury Department released an explainer today on the tax credit.And many states also offer tax credits, but here I’m talking about the federal one.

They say that, as of today, eligible consumers can only get the $7,500 federal tax rebate on cars assembled in North America.

The Treasury Department also issued a FAQ on which models are eligible for the tax offset based on being manufactured or assembled in the US, and I’ll reprint it at the bottom of this column. Here’s my understanding of the situation:

There is a catch. The Chevy Bolt and Teslas are assembled in America, but For the rest of this year, if you buy an electric car from a company that has sold 200,000 or more of them in the US, you can’t get the rebate. So that rules out the Bolt and Tesla until January 1. If you have your heart set on one of those choices, the good news is that come January the 200,000 cap will be lifted, and by new rules on battery sourcing that will come into play in 2023, Tesla and the Chevy Bolt will be among the few EVs eligible for the credit.

So, if you want a Tesla or Bolt, and you really want the tax rebate, it turns out it is better to wait until January. The Bolt will be a steal starting next year, since the basic model has been dropped in price to $26,000, and with the tax offset you’re looking at $18,500 for a nice EV that was selling for $36,000 last year this time. The price is so attractive that a Bolt makes sense even without the rebate, since you’ll save a lot on gasoline. While Chevy had trouble with a few batteries being unsafe last year, they did a recall and have by now installed a different kind of battery in all Bolts that does not have that problem.

The Nissan Leaf is about as good a deal price-wise as a Bolt. With a starting price for the basic model of $27,400, it falls to about $20,000 with the federal tax write-off. The Leaf is popular and is time-tested, as one of the first EVs. The range of the basic model, however, a little shorter than the rest of the current generation of EVs, at 150 miles on a full charge. That can be raised to 220 miles with a luxury battery pack, which costs extra. Still, the average automobile trip for most drivers is only 5 miles, and the Leaf will get most people through the day– even through a 40-mile commute each way. I figure if someone wants to go on a long road trip, they can always rent a car. Although the Leaf is manufactured in the US, it isn’t clear to me whether it will be eligible for the tax cut next year because it will depend on where the batteries come from. The Treasury Department FAQ does list it for 2023.

The rest of available choices are pricier. But let’s face it, the average cost of a new car in the US is over $47,000 this year. So, a basic Ford Mustang Mach-E with a starting price of $44,000, which comes down to $36,500 with the federal tax offset, is therefore substantially less than the average car bought in the US this year. I took a Mach-E for a spin this summer, and I liked it a lot. But despite the branding, it is really just a family EV, not what I would have thought of as a Mustang. EVs in general, though, are like sports cars, with incredible pick-up.

I don’t know so much about some of the other offerings that are eligible for the federal tax rebate. Some of those models are plug-in hybrids, of which I disapprove. A study in Europe found that EVs manufactured under ideal circumstances (e.g. in Sweden, which has low-carbon electricity) are 80% less carbon intensive than internal combustion engine (ICE) cars over their lifetime. Even those made, say, in China, where the grid is dirty with coal, were 38% less carbon intensive than ICE vehicles. Plug-in hybrids were no more than 20% less carbon-intensive. I leased a plug-in hybrid about a decade ago. You only get about 20 miles of electric battery mileage before the gasoline kicks in, and I found that in the winter the car heater ran on gasoline. So a PHEV is an improvement, but not a world-beating one. We should just cut the cord and go to straight EVs if we want the carbon savings.

There are a lot of complaints that next year, only buyers of Teslas and Bolts will likely be able to take advantage of the federal tax credit. But a lot of automobile makers will just start doing the final assembly of their EVs in the US. And within a couple of years, American-made batteries will be widely available. EVs are falling in price so fast and save you so much on expensive gasoline that consumers will begin to realize they are a steal even without the tax credit. And state tax credits don’t have the strings that the new federal ones do.

For anyone who has hesitated, now is the time to go electric. Pairing an EV with rooftop solar, for homeowners, allows you pay off both more quickly and get to the point where initial purchase costs have been covered by the savings on carbon-intensive and expensive fuels.

Also, readers sometimes write to say they live in an apartment building and EVs aren’t very convenient yet under those circumstances. That is understandable, and I think the situation may change, with a massive build out of public chargers that was part of the Infrastructure and Jobs Act last year. So, we may be talking about people who live in single family homes for the moment. But 65.8% of Americans are homeowners, so that’s a couple hundred million people.

Others write in to say that mass transit is greener than EVs. This is true, and we need more of it. But I live in Michigan where mass transit is pretty limited except for city buses, and with the pandemic still raging, there are issues we have to overcome. America is a car-driving society with the exception of a few urban pockets, and we will get to zero carbon in some part by having green cars.

So here’s the Treasury Department list of models that they think are eligible for the federal tax rebate until the end of the year. Their web site lets you double check with the vehicle’s VIN: