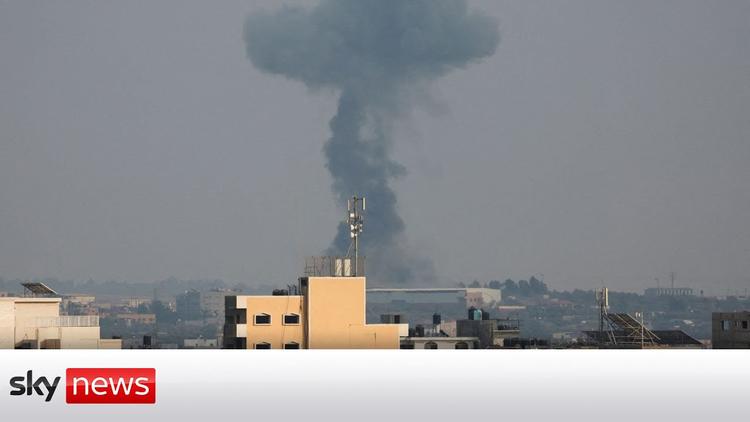 ( Middle East Monitor) – Israeli Defence Minister, Benny Gantz, summed up the tense scene in Gaza and its environs by saying: Life will not be normal in the Gaza Strip as long as the life routine is not normal in the settlements around it. The settlers in this area complained about the closures accompanied by a state of terror resulting from the declaration of an extreme state of emergency out of fear that the resistance would respond to the recent raids and arrests in Jenin camp. This recently resulted in the arrest of Islamic Jihad leader, Bassam Al-Saadi, and the martyrdom of the young man, Jihad Al-Kafrini.

The confrontation in Jenin soon spread to Gaza and its environs by turning it into a war zone that restricted the movement of settlers and stopped trains and transportation completely without the resistance firing a single shot. Mediation efforts did not succeed in ending the state of alert in the ranks of the Islamic Jihad fighters, prompting the Israeli security establishment to announce the continued closure of the Gaza border areas for two additional days, after security deliberations took place Wednesday evening in the Israeli cabinet. They had decided to keep the state of alert in the ranks of the Israeli occupation army in the Gaza region.

The cabinet decision aligned with the continued closure of the Beit Hanoun/ Erez and Kareem Abu Salem/ Kerem Shalom crossings, thus hindering the movement of workers from the Gaza Strip to the 1948 occupied territories and the entry and exit of goods to and from the besieged Gaza Strip. In doing so, the occupation is trying to prevent confrontation by raising the economic costs after the military deterrence mechanism failed to achieve its goals in deterring the resistance and separating it from the West Bank, as the resistance and the Islamic Jihad movement raised the level of alertness in its ranks, declaring its intention to engage with the occupation.

The erosion of Israeli deterrence

Israeli concern about the tense scene slipping into a large-scale confrontation, its determined attempts to avoid escalation through Egyptian and Qatari mediation, providing media messages confirming the good health and psychological condition of the detained leader, through photographs published by Al-Saadi in one of the detention and interrogation centres, confirms that the occupation seeks to avoid a confrontation that Israel’s deterrence capacity did not succeed in preventing.

The confrontation, its details and its developments revealed a decline of confidence in the Israeli deterrence capacity and raised important questions about the possibility of the occupation continuing its violations in the West Bank without strongly pushing it towards a confrontation with the resistance. The confused and hesitant position of the occupation prompted many Israeli journalists and media professionals to say that the resistance won without firing a shot.

Others said that Israel’s deterrence capacity had collapsed, while others said that the state of confusion and panic over the response of the resistance is insulting as, instead of punishing “the terrorists”, it punished the settlers in the areas near Gaza. The most prominent comment on this was made by Yossi Yehoshua in Israel’s Yedioth Ahronoth newspaper, where he said that stopping trains and closing roads in the south for the second day, for fear of the response to the arrest of a wanted person (not an assassination) in Jenin, definitely indicates a problem in deterrence.

The sequence of events that followed the storming of Jenin and the arrest of the Islamic Jihad leader confirms the erosion of the Israeli deterrence theory. This is because the occupying power is keen on the safety of the detained leader and fears the reaction of the resistance, thus reviving diplomatic channels and mediation, and resorting to economic tools. This emphasises the absurdity and limitations of Israel’s military deterrence capability and the occupation and its leaders’ lack of confidence in the ability of its army to confront or achieve any results.

Restrictions and limitations of the Israeli policy towards the resistance

The erosion of the Israeli deterrence power confused the occupation and its leaders and questioned its ability to implement and pass its projects in the West Bank without clashing with the resistance in the Gaza Strip, or without the confrontation expanding beyond this, geographically and demographically. This, in turn, provoked Israeli concerns in removing four fears that have become one of the fundamental constants and determinants of any Israeli security or political move, and they can be summarised as follows:

First, the constant fear of slipping into a wider confrontation with Hezbollah in light of the state of tension in the Mediterranean, due to the failure of US mediation to reach a settlement on the maritime borders, and the approaching date of work to begin on the Karish gas field next September.

Second, Israeli concern that the confrontation with the resistance will exacerbate the political crisis, thus pushing Israel into a dark political tunnel after the holding of the fifth Knesset elections next November that prevents the formation of a government and also deepens the division between society and the elites.

Thirdly, the intensification of psychological and security pressures on the occupation after security reports published by the Israeli press (Israel Hayom and Haaretz) revealed that the occupation army was not ready to engage in a ground confrontation with Hezbollah and a lack of preparation for defending naval sites. The reports revealed, Chief of Staff, Aviv Kochavi, failed to achieve and develop the capabilities of the occupation army, even though he had spent three and a half years in his position.

Fourth, the decline in the occupation’s ability to position itself regionally and internationally, especially towards the Arab normalisation countries or towards Russia in Ukraine and China, which recently entered into a confrontation with the US on the island of Taiwan.

In conclusion, the recent confrontation did not only reveal the erosion of the Israeli deterrent power and the loss of confidence in the capabilities of the occupation army to carry out successful military missions to protect settlers, but also revealed the dilemmas the PA is facing along with its institutions in Ramallah and its lack of political and security abilities and ineffectiveness to respond to the daily raids and violations by the occupation in Jerusalem and the West Bank. Meanwhile, the resistance is developing its capabilities and its political and military effectiveness in the Gaza Strip.

Hence, the resistance has turned into a major and influential actor in the course of events in the West Bank by linking the confrontation in Jenin camp to the capabilities of the resistance in the Gaza Strip for the second time since the Sword of Jerusalem battle last May 2021, which linked Jerusalem, the Gaza Strip, and the territories occupied in 1948.

In conclusion, the PA lost its justifications for its existence in the face of the development in the resistance’s capabilities and its political and military effectiveness in deterring the occupation, imposing its conditions on it, and restoring the geopolitical link between the West Bank and the Gaza Strip. This is an important and embarrassing result for the occupation and the leaders of the PA, who are counting on the economic path and the useless approach represented by the PA leadership in Ramallah as a model that compares to the resistance in its impact and its political, security and even economic effectiveness.

This work by Middle East Monitor is licensed under a Creative Commons Attribution-NonCommercial-ShareAlike 4.0 International License. The title has been changed and minor retranslation of a few phrases in Arabic has been carried out.