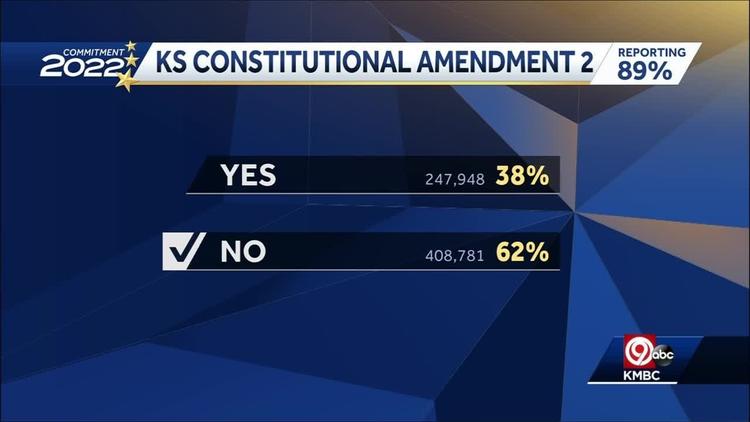 Ann Arbor (Informed Comment) – In a startling development, Kansas voters rejected a ballot initiative on August 2 that would have specified in the state constitution that it does not protect the right to abortion. That would have allowed the heavily Republican-dominated state legislature to pass an abortion ban. It can’t do that now because the Kansas Supreme Court found in 2019 that the state’s constitution forbids an absolute abortion ban. So reports Gabriella Borter at Reuters.

Dylan Lysen at NPR reports that the amendment was rejected by 512,516 votes (59.2%) to 352,968 votes (40.8%). Usually, more Republicans than Democrats come out to vote in such out-of-season elections, so the anti-abortion win is all the more impressive.

This is a political earthquake. Kansas voted for Trump over Biden in 2022 by 771,406 to 570,323, with all but a handful of counties voting Republican. It was 19% more Republican than the national average. In the 2016 presidential election, Trump’s margin over Hillary Clinton was even bigger, 56% to 36%. In the state’s legislature, Republicans hold the Senate by 29 to 11, and the lower house by 86 to 39.

The “No” vote on allowing the state legislature to ban abortion at 59.2% was actually bigger than the vote Trump got in 2016, 56%!

In 2019, the state court had relied on the Kansas Bill of Rights, passed in the 1890s, the first article of which puts into law a principle expressed in the Declaration of Independence: “Equal rights. All men are possessed of equal and inalienable natural rights, among which are life, liberty, and the pursuit of happiness.” Six of seven justices on the Supreme Court found that banning abortion entirely, or banning medical procedures related to it, would violate this broad principle. Gee, I think everyone should try to get that language put into their state constitution.

Kansas allows abortions up to 22 weeks, and strong protections for the life of the mother. In contrast, the Idaho legislature has passed a near-total ban on abortion that has provoked a lawsuit by the Department of Justice insisting that patients, even if they are pregnant mothers have the right in federal law to proper patient care. The DoJ explains, “The complaint seeks a declaratory judgment that § 18-622 conflicts with, and is preempted by, the Emergency Medical Treatment and Labor Act (EMTALA) in situations where an abortion is necessary stabilizing treatment for an emergency medical condition.”

People in Kansas clearly have watched Republican-dominated statehouses take such extreme positions, endangering women’s lives in case of ectopic pregnancies or other medical emergencies. The issue is that a near-total abortion ban could open physicians to a charge of murder if they move to save the mother’s life before it is absolutely necessary by performing an abortion. But when is it absolutely necessary? And how often will physicians, terrified of the state penitentiary, put off intervening until it is too late for the woman?

Borter quotes Neal Allen, a political science professor at Wichita State University, as saying, “This is a titanic result for Kansas politics . . . This should be a real wake-up call for abortion opponents …When a total ban looks like a possibility, then you’re going to get a lot of people to turn out and you’re going to lose a lot of the more moderate supporters of abortion restrictions.”

Oriana Gonzalez at Axios reports that a recent nationwide poll found that 55% of voters consider abortion access a key issue– nearly the same percentage as are worried about gun violence and tying with health care concerns.

I think what happened in Kansas has special relevance to Senate races, and the abortion issue could help President Biden keep control of the Senate, especially given the goofballs the Republicans are running in places like Pennsylvania and Georgia.

The House is elected from heavily gerrymandered districts, and so may feel the abortion issue less. Still, if a significant number of Republican women defect, sitting out the election or voting for pro-abortion Democrats, that could swing some congressional races. Some 38% of Republicans are pro-abortion, including the less religious women in the party, according the Pew Research Center.

It has been said that the Republicans opposing abortion all those years are the dog that finally caught the car. In 2018, Democrats benefited from an anti-Trump sentiment and a Blue Wave. In 2022, they may be poised to surf a Pink wave, courtesy the far-right Supreme Court.