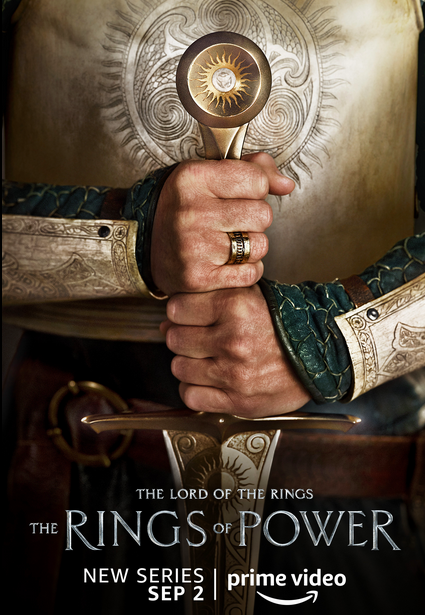 Ann Arbor (Informed Comment) – American white nationalism has attempted to appropriate certain cultures, times and places as quintessentially “white,” and so it is no surprise that, as John Blake at CNN writes, there is controversy on the American Right about the multicultural casting visible in the Amazon Prime series Rings of Power, based on the fantasy writing of Oxford Don J. R. R. Tolkien. Some people are offended by seeing persons of African or Latin heritage play roles in this fantasy series and others, such as HBO Max’s House of the Dragon, and the Marvel Studios films about Thor.

It is not a new controversy. Television journalist Megyn Kelly when she was at Fox insisted that Santa Claus is “white.” I’m not sure why that was important to her (or more likely the bosses who were constantly hitting on her), but it is not true.

Then there were the white nationalist Thor fans who did not want Idris Elba to play Heimdall, the mythic guardian of the Bifrost bridge to Asgard. I pointed out that the far-flung Viking conquests certainly made them a multi-cultural society, and that there were likely Muslim converts among them, as well as intermarriages with Africans and Mediterranean peoples.

As for Middle Earth, it is of course a fictional place with lots of types of creatures in it. It is a little mysterious how people can suspend disbelief enough to accept a story about elves and dwarves and orcs but not enough to accept a story about Black elves. Elves were a step too far for some of Tolkien’s friends. He used to read out The Lord of the Rings to his “Inklings” group at Oxford, and at one point fellow academic Hugo Dyson, lying on the couch, needled him: “Oh God, not another fucking elf!”

Speculative fiction is all about world building. Some literary theorists have noted that story is character, plot and setting, and that in speculative fiction “setting” takes center stage. So let us consider Middle Earth as a world. Black skin is an adaptive mechanism in parts of the earth with high ultraviolet rays It helps prevent embryos from being damaged by those UV rays. If Middle Earth was a whole world, then it had a tropics where there would have been black-skinned creatures, and those would have circulated. It is only the novice speculative fiction writers who speak of an “ice world” or a “wet world.” Planets are large and have many climes. Tolkien was no novice.

Then there was the character of the man. Despite living in a world of white male privilege at Oxford, a world he no doubt could not entirely escape, in some respects Tolkien was what white racialists would now call “woke.” He had been born to an English family in South Africa, and once said publicly that “I have the hatred of Apartheid in my bones.”

In 1938 when a German publisher wary of the Nazis’ racist policies wrote Tolkien to ask whether he could prove his Aryan descent, the author wrote out a couple replies, one of which said,

“Thank you for your letter. I regret that I am not clear as to what you intend by arisch. I am not of Aryan extraction: that is Indo-Iranian; as far as I am aware none of my ancestors spoke Hindustani, Persian, Gypsy, or any related dialects. But if I am to understand that you are enquiring whether I am of Jewish origin, I can only reply that I regret that I appear to have no ancestors of that gifted people. My great-great-grandfather came to England in the eighteenth century from Germany: the main part of my descent is therefore purely English, and I am an English subject — which should be sufficient. I have been accustomed, nonetheless, to regard my German name with pride, and continued to do so throughout the period of the late regrettable war, in which I served in the English army. I cannot, however, forbear to comment that if impertinent and irrelevant inquiries of this sort are to become the rule in matters of literature, then the time is not far distant when a German name will no longer be a source of pride.”

As an expert in historical linguistics, Tolkien obviously took some pleasure in pointing out to the Nazis that their ideal of racial purity, Aryanism, encompassed Iranians and Indians, and included brown-skinned and Black people along with whites. Sir William Jones in the late 18th century had been flabbergasted to discover that Sanskrit and Persian were clearly related to Greek and Latin.

In the early 1940s, Tolkien wrote to his son, “I have in this war a burning private grudge against that ruddy little ignoramus Adolf Hitler.” Tolkien admired what he called “the northern spirit,” but he thought of it as broadminded and Hitler was ruining it for him.

I think we know exactly what Tolkien would have thought of Trump’s blatant racism and of the values of the American white nationalists who secretly idolize Hitler.

Tolkien’s high fantasy owes some important debts to the pre-Raphaelite William Morris. The pre-Raphaelite movement of artists and poets in mid-nineteenth-century Britain was in important ways a rebellion against Establishment whiteness, privileging Dante over Hobbes, Giotti over Raphael, and brunettes over blondes. Morris did go to Iceland and was influenced by the Elder Edda, but he was also deeply influenced by the Rubaiyat of Omar Khayyam, Persian poetry from Iran, from the FitzGerald translation of which he created four illustrated and calligraphed manuscripts.

By the way, Robert E. Howard, who created Conan the Barbarian, was also in love with the Rubaiyat, and he made Conan an Iranian.

As for medieval Britain, it was also multicultural. My late colleague Sylvia Thrupp was one of the first historians to look at London demographic data in the medieval period, and discovered large numbers of foreigners living there.

“The medieval English writer Richard Devizes describes London as being populated by ‘Garamantes’ (Moorish Africans), and ‘men from all nations’ that ‘fill all the houses.’ These Africans were described by various terms such as: ‘Black’, ‘Ethiopian’ (a word used at the time to describe all Africans), ‘Moor,’ and ‘Blackamoore.’ Other terms such as ‘Saracen’ were also used to refer to Africans, as well as people from elsewhere, such as Western Asia. Some of these terms are now considered derogatory.

I think it is highly likely that some among this gaggle of brown and black-skinned people in medieval London were Muslims, though likely they kept that to themselves given the Inquisition.

So, no, the actual medieval world on which the high fantasy is often based wasn’t mono-cultural or mono-racial. So why should the fictional knock-offs be? And, no, Tolkien was not a racist and indeed he hated anti-Black racial segregation projects like Apartheid and the racial hierarchies erected by the Nazis. He said he only wished he had some Jewish ancestry, and used “ruddy,” which is associated with whiteness, as a negative epithet for Hitler.