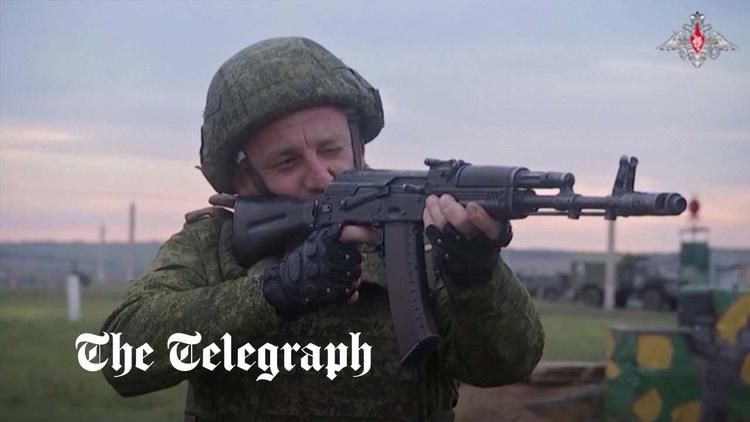 ( Foreign Policy in Focus ) – When a country starts casting around for 60-year-old veterans to send to the front, you know that something’s wrong. All hands don’t go on deck unless the ship is foundering. It’s not yet clear whether the Russian ship of state is taking on water. But its military effort in Ukraine is obviously at the SOS stage.

Exactly how weak is Vladimir Putin, both in terms of his effort to defeat Ukraine and his ability to maintain power in Moscow?

Last week, Vladimir Putin ordered up reservists from around Russia, the first such emergency appeal since World War II. The call is supposed to apply only to those with combat experience, but the net has been cast broadly to include anyone from 18 to 60. Even Putin allies have been forced to complain publicly about ridiculously ineligible men—old, disabled—who have been caught up in this “partial mobilization.” Notably absent from these insider critiques has been any acknowledgement that recruitment has focused on the poorest, non-ethnic-Russian parts of the federation. In Russia, as in the United States and so many other countries, poor minorities are the cannon fodder of first resort.

Russians of all nationalities have pushed back. Demonstrations broke out in 43 cities immediately after the announcement of the mobilization, and the authorities have detained nearly 2,400 people. Seventeen recruitment centers have been attacked in the latest upsurge of anger (and 54 in all since the launch of the invasion). All too aware of how this particular game will end, a lot of Russians have simply headed to the exits: more than a quarter of a million men have joined the exodus since the announcement, on top of the nearly 4 million people who left in the first quarter of the year.

Article continues after bonus IC video
The Telegraph: “Mobilised Russian reservists given ‘military training’ amid claims of lack of supplies”

It’s not just Russian citizens. Ukrainians in the occupied territories, too, have reportedly been press-ganged to fight, with Russian commanders threatening to send them to the front without any weapons if they refuse.

As the call-up continues, Russian-backed referenda in four areas of occupied Ukraine have polled people on whether they want to join Russia. It’s really a moot question. Russian authorities have already introduced the ruble into these areas, in addition to distributing Russian passports and deporting to Russia a lot of folks who would have likely voted against annexation.

Putin is calculating that Russians will be more willing to fight on behalf of questionably de jure as opposed to merely de facto Russian territory. Whether they want to or not, the new recruits can be more easily dispatched to the front once it has become technically part of Russia. As soon as the referenda produce their pre-engineered results, the Russian president can also recast the conflict as Ukraine attacking Russia rather than the other way around. Further, he has ominously hinted that the Kremlin will introduce more advanced weapons (read: nuclear) to defend against any attacks on this enlarged Mother Russia.

Russian state propaganda has cast all these developments as expressions of strength. They clearly aren’t. The recent Ukrainian counteroffensive has clawed back significant chunks of previously occupied territory around Kharkiv in the north, Russian forces have been back-footed around Kherson in the south, and Russia’s command structure on the ground has suffered grievous losses. But such reversals could be temporary, and military setbacks in the Donbas don’t necessarily translate into political setbacks in Moscow.

So, exactly how weak is Vladimir Putin, both in terms of his effort to defeat Ukraine and his ability to maintain power in Moscow?

Half the world, the northern half, has maintained targeted sanctions against Russia after its February invasion of Ukraine. These sanctions principally cover weapons sales, transfers of sophisticated technology, some financial services, and some energy exports. So far, they have produced what often seem to be contradictory results.

So, for instance, Russia has continued to bring in a lot of money from its energy exports, but the sales have increasingly been at discounted prices. Export earnings from energy sales are expected to reach nearly $338 billion this year, compared to $244 billion in 2021, a nearly 40 percent increase. But the Russian economy overall is shrinking—from anywhere between 3 percent (Russian figures) to 5.5 percent (OECD figures) for 2022.

The ruble has stabilized, levels of unemployment remain roughly the same, and inflation is steady. The Russian government decreed a 10 percent increase in pensions and the minimum wage, which helps explain why Putin’s approval rating remains north of 80 percent (a figure that fails to reflect persistent discontent among younger Russians as well as anger surrounding the current “partial mobilization”).

However, the sanctions weren’t designed to trigger regime change or precipitate a collapse of the Russian economy. They were meant to disrupt Russia’s ability to prosecute its war in Ukraine. Here, the sanctions appear to be effective in hobbling Russia’s military-industrial complex.

The first evidence is Putin’s outreach to Iran and North Korea. Traditionally, the military relationship with these countries has been one-way, involving the export of Russian military hardware to countries facing significant sanctions of their own. This time, with Russia now leading the list of sanctioned countries, Putin has gone to Tehran and Pyongyang with a tin cup, desperate to get drones from the former and Soviet-era materiel from the latter.

Second, even for hardware manufactured domestically, Russia depends on components made in other countries. It’s these high-tech parts—such as semiconductors—that are proving to be the weak link in the Russian manufacturing process.

“The sanctions are not working as fast as the West had thought,” says former Russian deputy minister of energy Vladimir Milov from the relative safety of Lithuania. “But Russia’s industrial output is down 60 to 80 percent and, in terms of high technology, Putin is already back in the Stone Age.”

Will any of this make the Russian president think twice about his war in Ukraine?

Leaders rarely act according to sophisticated cost-benefit analyses. Hitler’s attack on Russia in 1941 was less strategic than megalomaniacal. The U.S. invasion of Iraq, from the standpoint of either winning the war in Afghanistan or increasing U.S. influence in the Middle East, was a tremendous tactical error.

Putin’s decision to wage war in Ukraine was similarly hare-brained, not so much because he failed to anticipate Ukrainian resistance—most people, including a lot of Ukrainians, were surprised at the defeat of Russian forces outside the gates of Kyiv—but because he did not understand how geopolitically isolated Russia would become as a result of the invasion. He counted in particular on greater support from China, but Beijing has studiously obeyed the sanctions regime and voiced quiet concerns about Russian actions. India has been slightly more vocal in its criticisms. At the UN this week, both countries urged negotiations to end the war.

Perhaps after absorbing all of this information—about the impact of sanctions, the resistance to the “partial mobilization,” the criticisms from erstwhile allies—Putin will reconsider his aims in Ukraine. Indeed, in a speech released on September 21, he said nothing about the “denazification” and “demilitarization” of all of Ukraine and focused more narrowly on the Donbas region. But judging by his insistence on holding the line at Kherson and the continued bombardment of cities far from the front lines like Odesa, Putin still wants to control as much of Ukraine’s southern coast as possible, to further connect Crimea to Russia by land and to box Ukraine in by sea.

Can Putin be persuaded—or forced—to abandon these larger ambitions? Again, he is not operating according to an entirely rational game plan. The Russian leader has become intoxicated by the idea that he will restore Russia to its nineteenth-century grandeur as a regional hegemon, a counterforce to European powers, and a respected (and feared) global actor. Victory in Ukraine is central to this plan, for if Russia cannot recover territories that it held until the 1917 revolution—and under the auspices of the Soviet Union for another 75 years—then it can make no such grandiose claims. If nuclear weapons are necessary to secure such a legacy, Putin will not likely hesitate to use them.

That’s where China and India come in. Putin doesn’t care what Joe Biden has to say, and he doesn’t seem to pay much heed to NATO either. But China in particular is furious that it is suddenly caught between two unpredictable nuclear powers—Russia and North Korea—and there’s nothing like a thermonuclear blast to mess up one’s plan for global economic expansion. The Biden administration needs to work much more closely with Beijing to thwart Putin’s nuclear brinksmanship. If that requires an economic and diplomatic rapprochement between the United States and China, so much the better.

The other lingering question is Putin’s own political position. He faces no serious opposition either from individual politicians or institutional forces. The citizens that most oppose his policies have been jailed or have left the country. The economy hasn’t tanked completely, the population has been largely bought off with handouts and force-fed with pro-war propaganda, and the anti-mobilization protests don’t yet show the potential of becoming part of a larger anti-war effort much less an anti-Putin movement.

Putin has made himself into the indispensable leader. A military coup is conceivable, along the lines of the Decembrist revolt of 1825, but that will only happen if the war, the economy, and the president’s political acumen all simultaneously go south. Even if Putin himself were to suddenly die, an imperial nationalist of similar pedigree like former president/prime minister Dmitry Medvedev would likely take the reins and stay the course. Russia needs another revolution—peaceful, democratic—not just another leader.

Whether he’s out in front or backed into a corner, Putin is dangerous: for Ukraine, for the world, even for a lot of Russian citizens. The challenge is to force the Russian leader into the kind of middle position where he can preserve Russia’s regional power without the occupation of Ukraine and its superpower status without the use of nuclear weapons. That’s not the Russia that Putin wants. But, as long as Russian citizens continue to protest, Ukraine hangs tough, and China and India clip Putin’s wings, that’s the Russia he will get.