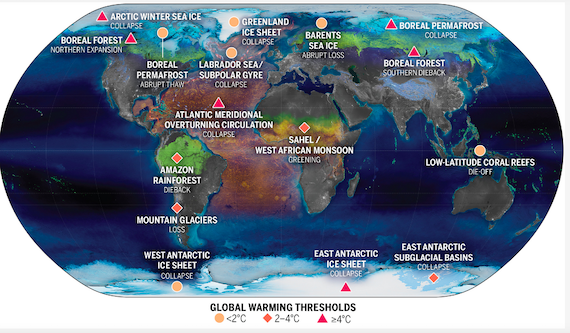 Ann Arbor (Informed Comment) – In the Book of Revelation by John of Patmos, seven seals are described, and when the first four are broken, four horsemen emerge, Conquest, War, Famine and Death. It turns out that our latter-day apocalypse will be driven by 15 tipping points affecting the earth’s climate. The sooner humanity stops burning coal, petroleum and fossil gas, the sooner a set of significant dangers will begin to recede. On the other hand, if the new British Prime Minister Liz Truss commits to extracting gas by hydraulic fracturing, she will lock in a significant increase in heat-trapping gases in the atmosphere– carbon dioxide and methane.

David Armstrong McKay et al. have just published at Science an article surveying the 15 climate tipping points identified by the UN’s IPCC and the amount of extra warming that will trigger them. Here is the graphic they used to illustrate these tipping points:

The authors draw on an established definition of tipping points as “a critical threshold at which a tiny perturbation can qualitatively alter the state or development of a system.”

A famous tipping point is 212°F (100°C), the temperature at which water boils. At 211°F you just have water. But increase the heat by one degree and the water goes into a new state, producing steam. The one degree increase is small. After all, you took the water from room temperature all the way to 211°F and nothing happened. But that is a critical threshold, so heat the water a further degree and you get a qualitative change in the state of the water– it turns to vapor. Once you boil off all the water into the air, it wouldn’t be easy to get it back into the pot as water. Once you hit a tipping point, some changes are irreversible or at least hard and expensive to reverse. McKay & colleagues are telling us that the earth is at the equivalent of 211°F, and if we heat it up even a little more, we will deeply disturb the climate system.

Article continues after bonus IC video
PBS Terra: “What Will Earth Look Like When These 6 Tipping Points Hit?”

The first set of tipping points are in what the authors call the Cryosphere, the earth’s ice cover. Here we have the potential loss of the Greenland Ice Sheet, of the West Antarctic ice sheet, the East Arctic subglacial basins and the East Antarctic ice sheet. Another tipping point in this dimension could be the thawing of the arctic permafrost. Finally, there is the danger of the loss of ice at high altitudes in the earth mountains, as with the glaciers of the Swiss Alps.

Second, the ocean currents could get messed up.

Third, the biosphere would suffer. The Amazon Rain Forest could be tipped over from being a carbon sink to being an emitter of carbon dioxide. We could lose the Boreal Forest ringing the arctic. The Sahel region of Africa could become even more desertified.

Each of these climate disasters would be set off when we reach a new increase of temperature. Some of them may already be being triggered by the 1.1 degrees C. (1.98F) to which we have heated the earth up since pre-industrial times. Others could be tipped when we get to 1.5C (2.7F) in the 2030s, which we will, the way the world’s nations are going. Still others will be tipped at 2 degrees C (3.6F). The authors see signs of our going to 3 degrees C. (5.4 degrees F.) by the end of this century, if business goes on as usual, The hotter it gets, the more likely it is that all 15 tipping points will be reached. That won’t endanger the existence of the human species, but it will pose challenges to civilization– electricity provision, ports and other key infrastructure will be damaged.

We can avoid these tipping points by avoiding fossil fuels.