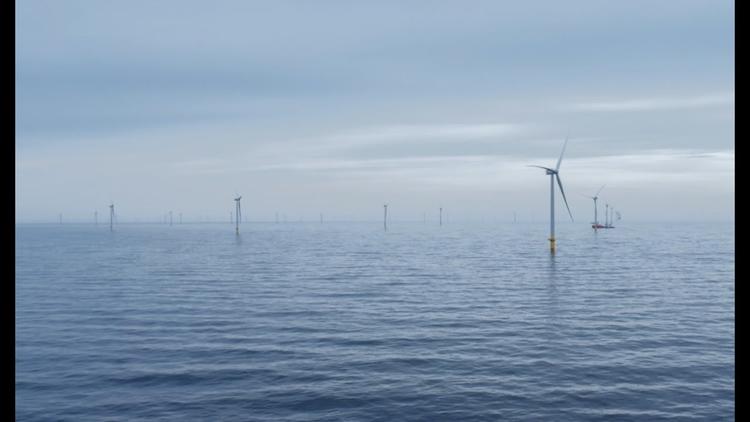 Ann Arbor (Informed Comment) – The Danish wind energy company Orsted reported recently that its massive 1.3 gigawatt offshore wind farm, Hornsea 2, off the Yorkshire coast, has gone fully operational. It joins its sister project, Hornsea 1, which generates 1.2 gigawatts. A further, even bigger such facility, Hornsea 3, will have a nameplate capacity of 2.4 gigawatts.

Hornsea 2 has 165 big wind turbines, and provides electricity to 1.4 million households. It is currently the largest offshore wind farm in the world, though it will not likely keep the crown very long.

Ironically, the milestone comes as the far right wing new prime minister, Liz Truss, has put equally far right wing Jacob Rees-Mogg in charge of the Department for Business, Energy and Industrial Strategy. Rees-Mogg is a creature of Big Oil who says he wants to wring every last drop of petroleum from the North Sea fields and that he “would rather have cheap energy than windmills.” That he does not know that wind turbines produce energy that is much cheaper than fossil gas is a worrisome sign, though perhaps that is a redundant observation. “Jacob Rees-Mogg in charge of Something Important” is intrinsically alarming.

The facility joins 12 other offshore wind farms in the UK now being operated by Orsed, which generate 6.2 gigawatts of renewable energy, powering 7 million homes.

Orsted wants to install 30 gigawatts of offshore wind around the world, including in places such as Taiwan, by 2030.

The UK has a goal of 50 gigawatts from offshore wind by 2030, which is more ambitious than the current US goal of 30 GW by 2030. The UK, of course, has a big head start, since in the US there are still no big offshore wind farms in operation.

As Britain enters a difficult winter when electricity and energy prices are expected to skyrocket for most consumers, perhaps as much as 80%, the additional offshore wind electricity generation capacity is a godsend. This summer, offshore wind prices in the UK fell to their lowest ever level, despite price inflation in some key materials.

Renewables, Simon Evans at The Guardian shows, have allowed the UK to avoid importing even more expensive fossil gas this year, replacing it with clean, inexpensive electricity. The fuel, wind, costs nothing, so the only expenses are for building and installing the turbines to capture it.

Earlier this year, at least, renewables were generating some 45% of the UK’s electricity. Without this inexpensive and clean resource, and given the country’s energy crisis, impelled by the high cost of fossil gas after Russia’s invasion of Ukraine, British consumers would be in desperate straits indeed.

Alas, it is entirely possible that Ms. Truss and her dilettante energy czar with the plummy voice and implausible moniker will kill the goose that lays the golden eggs.