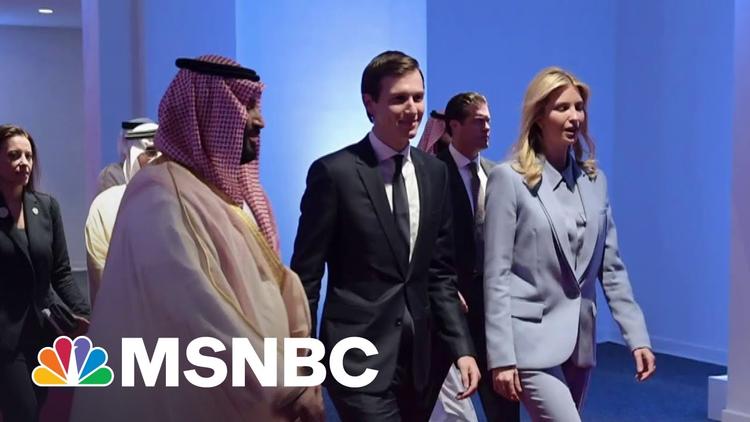 Ann Arbor (Informed Comment) – The House Committee on Oversight and Reform, chaired by Rep. Carolyn B. Maloney (D-NY), sent a sharp letter to Trump son-in-law Jared Kushner last June, wanting to know whether he illicitly profited from his government service as Trump’s special envoy to the Middle East to receive $2 billion from the Saudi Public Investment Fund for his investment company, Affinity. The committee notes that Kushner received the massive sum from Riyadh even though he had no experience with this sort of investment.

This is a story that Informed Comment has been following.

I wrote in a column last May that, “In April 2022, the New York Times reported that the board of directors of the Saudi Public Investment Firm had balked at putting $2 billion into Affinity on the grounds that Kushner had no track record in investing large sums successfully. The NYT said that Mohammed Bin Salman personally overruled them to allow the deal to go forward.

Journalist Vicki Ward alleges that when he was in the White House, Kushner got wind of CIA reports of a possible coup against Mohammed Bin Salman by his cousin Mohammad Bin Nayef, the former Interior Minister. The CIA, she alleges, was all for the coup, but Kushner called up MBS and warned him. As a result, US intelligence never did give Kushner a high security clearance, since they were afraid that he would out all US assets in Saudi Arabia to the crown prince.”

I also wrote that, “Dion Nissenbaum and Rory Jones at the Wall Street Journal got the scoop that Affinity, Jared Kushner’s investment firm, will invest some of the $2 billion it got from Saudi Arabia’s sovereign wealth fund in Israel.”

What was in it all for Bin Salman? I reached the conclusion that “The … boon that MBS has been granted is the Kushner investment opportunity. It may not be a wise move for the Kingdom, but it is excellent for the crown prince. By indirectly investing in Israel through Kushner, Mohammed Bin Salman may have a hope of getting the K Street Israel lobbies like AIPAC on his side, who may then pressure Biden to set aside the Khashoggi murder. Since the move is indirect, MBS can also sidestep King Salman’s reluctance to get too close to Israel.”

The Committee on Oversight and Reform pulled no punches in its letter to Kushner. Maloney said,

So Kushner had no diplomatic experience in such deal-making and he also lacked impartiality given Trump, Inc. investments in the Gulf countries. Zing, and then Zing again.

“Your support for Saudi interests was unwavering, even as Congress and the rest of the world closely scrutinized the country’s human rights abuses in Yemen, the murder of journalist Jamal Khashoggi by Saudi assassins tied to Crown Prince Mohammed bin Salman, and Saudi Arabia’s crackdown on political dissidents at home. After leaving your senior White House position, you formed an investment firm, A Fin Management, LLC (Affinity) and raised $2 billion from the Saudi Public Investment Fund (PIF), the sovereign wealth fund of Saudi Arabia, which is controlled by the Crown Prince. PIF made this substantial investment despite other senior Saudi officials’ concerns over your lack of investment experience.”

Maloney then gets to the pith of the matter:

” The Committee on Oversight and Reform is investigating whether you have improperly traded on your government position to obtain billions of dollars from the Saudi government and whether your personal financial interests improperly influenced U.S. foreign policy during the administration of your father-in-law, former President Trump. This investigation will inform the Committee about whether federal ethics laws should be strengthened to prevent senior public officials from taking advantage of their position within the federal government to reap a financial
windfall—before, during, or after government employment.”

Improperly. Traded. on. your. government. position. That’s the charge, a charge of corruption.

The Committee wants to know if Kushner granted

“the Kingdom what one scholar has termed “complete immunity” from consequences for its repressive and undemocratic actions.3 Former President Trump began his term by choosing Saudi Arabia as his first foreign trip, an unprecedented move for a newly elected president, and ended with his Administration refusing to suspend arms sales to the Saudi military despite its egregious human rights record.”

So to review, the Committee finds prima facie evidence of corruption on Kushner’s part, and wants more information and more documents from him. Finally, it demanded from Kushner all his documents on the Saudi Public Investment Fund’s decision and the rest of the paper trail that led his fledgling “Affinity” to become rich as Croesus.