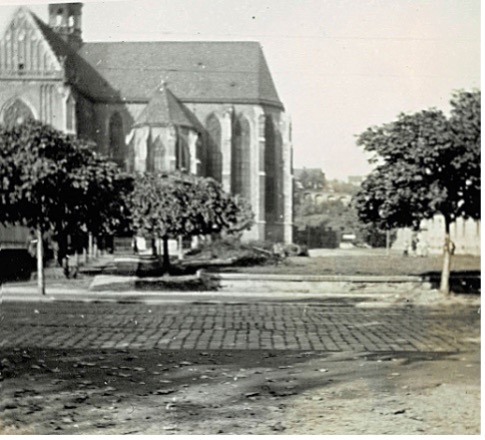 It is 2022, the bicentenary of the birth of the Augustinian friar Gregor Mendel, the founder of genetics, and this is being celebrated in all kinds of ways. In 1955, as a biology student, I travelled with a group of young people to Brno (then part of Czechoslovakia), where he had done his experiments with peas in the abbey garden. And we then saw at first hand what happens when politicians interfere in scientific disputes.

Amsterdam (Special to Informed Comment) – In 1910 a more than life-size white marble statue of the founder of genetics, Gregor Johann Mendel (1822-1884), was unveiled. It stood in the square outside the church of St Thomas’s abbey in the city of Brno, which was then part of the Austro-Hungarian empire and was known in German as Brünn. Between 1948 and 1993 Brno was part of Czechoslovakia, and it is now in the Czech Republic.

In the mid-nineteenth century the Augustinian friar Mendel had conducted his cross-breeding experiments with pea plants in the garden of the Brno abbey, and so paved the way for modern genetics. When I was studying biology at the University of Amsterdam in the 1950s, our professor of systematic botany and genetics Jacob Heimans never stopped mentioning the subject.

Mendel crossed plants containing pods of yellow peas with plants containing green ones. To his surprise, all the resulting peas were yellow, so it seemed as if the green colour had vanished. But when he then grew the yellow peas into plants and crossed their flowers with each other, the green colour reappeared, and always in the same proportions: a quarter of his new pea harvest was green, and the rest yellow! Mendel also discovered that properties could be inherited separately from each other. If he crossed wrinkled yellow peas with smooth green ones, he at first only obtained yellow offspring. But if he crossed those with each other, all kinds of combinations appeared: smooth yellow ones, wrinkled yellow ones, smooth green ones and wrinkled green ones, in fixed proportions that he could calculate in advance.

His observation that a property could cease to be visible but had not actually disappeared from the plants set him thinking. There was evidently something left in the plants that was responsible for a particular property, seed colour or shape. And thus he was the first person to discover what we now know as the carriers of heredity, or genes. He called the carriers of the property that prevailed over the other property dominant, and the carriers of the property that was dominated by the other property recessive. Mendel can thus be seen as the discoverer of genes – which, as we know now, consist of DNA. Yet even though he had carefully published his test results at the time, it would take until around 1900 for his discovery to break through to the scientific world.

We students were very fond of Professor Heimans and his fascinating, well-attended lectures. At one lecture he gave in spring 1955 he told us about the unveiling of the large statue of Mendel in 1910, outside the abbey garden where he had done his experiments. On the board he showed an enlarged photograph of the ceremony, and pointed out which celebrities had attended it – I still remember Erich von Tschermak, one of the three scientists who had independently rediscovered Mendel’s laws of heredity around 1900 (the others were Hugo de Vries and Carl Correns). But, Heimans continued with a sad voice, his face contorted with anger, now that the communists were in power in Czechoslovakia they had demolished the fine statue and smashed it into a thousand pieces….

He then explained how this had come about. After Czechoslovakia had joined the Eastern bloc in 1948, the government interfered in the work of the universities and in what was both studied and taught there. In the field of genetics this meant that only researchers who espoused the theories of the Soviet Russian biologist Trofim Lysenko were taken seriously – the rest were cast aside. Unlike Mendel and his successors, the now long-forgotten Lysenko believed that the hereditary properties of organisms could be permanently altered by the conditions they lived in. For example, if grains of corn were deep-frozen, plants grown from them would be more resistant to cold. This fitted in well with the Marxist view that people can be fundamentally altered by the conditions they live in; and it seemed a good way to help develop newly cultivated farmlands in Siberia.

In October 1955 I was one of a group of fifteen young people who went to Czechoslovakia with a Dutch youth organisation that offered trips to Eastern Bloc countries. There were two other biology students in the group, and at a meeting in someone’s home before we left each of us was asked to say which places we wanted to see while we were there. The three of us, who had attended Heimans’ lectures, brazenly announced that we wanted to see the statue of Gregor Mendel in Brno. To our surprise our request was granted, the visit was scheduled, and one fine autumn day we set off for Brno by bus.

The photographs we took there show that the statue was standing in the square outside the church of St Thomas’s abbey, and was still perfectly intact. But there was something odd about it – Mendel’s name was nowhere to be seen. Nor did the name of the square give any clue – the nameplate made no mention of Gregor Mendel. We must have noted down what it did say, but unfortunately I can no longer find any trace of the note. And we did not take a picture of it – in those days photographs were not yet so sharply focused that it would have occurred to us to photograph something that small from a distance. 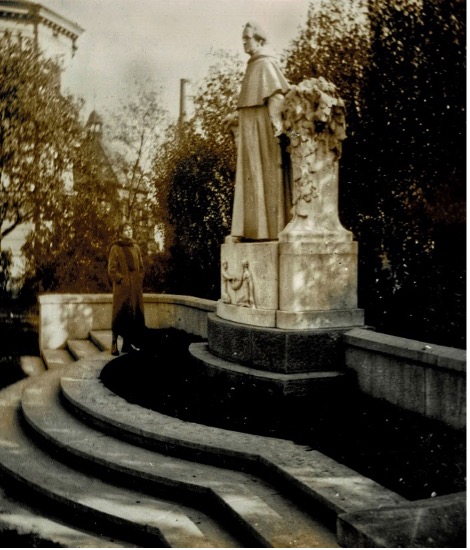 The fact that the name Mendel was missing from the statue was quite something. What the Czechoslovaks saw was a dignified gent in a long robe with a short cape over his shoulders, but no-one could know that this was the famous friar and researcher who had done his experiments at this spot a century earlier. What everyone could see was that the man was gazing candidly at the world and his hands were resting on posts overgrown with creepers. And the Catholics among them must surely have recognised his clothing as a friar’s habit. 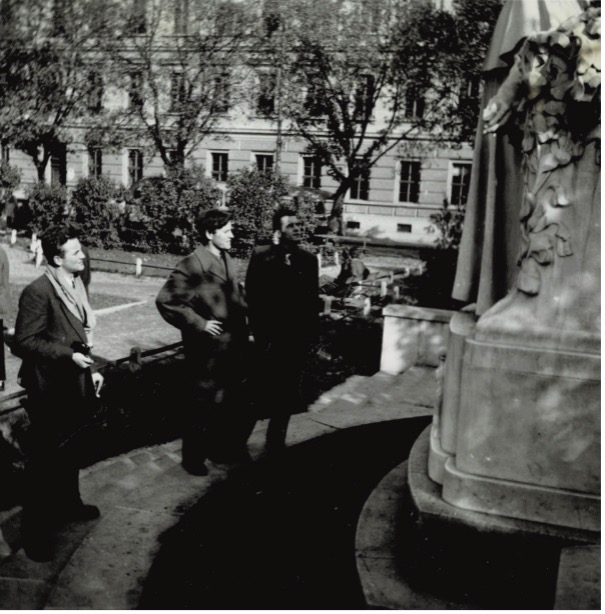 Brno, October 1955. Students looking at the statue of Gregor Mendel

There is every reason to assume that the decision to remove Mendel’s name had at least something to do with the fact that he was a Catholic friar – for communist regimes sought by fair means or foul to discourage their subjects from getting involved in religion. But in all likelihood the main reason was that Mendel’s importance had to be played down for the greater glory of Lysenko. And so we were witnesses to what can happen when politicians interfere in scientific disputes. 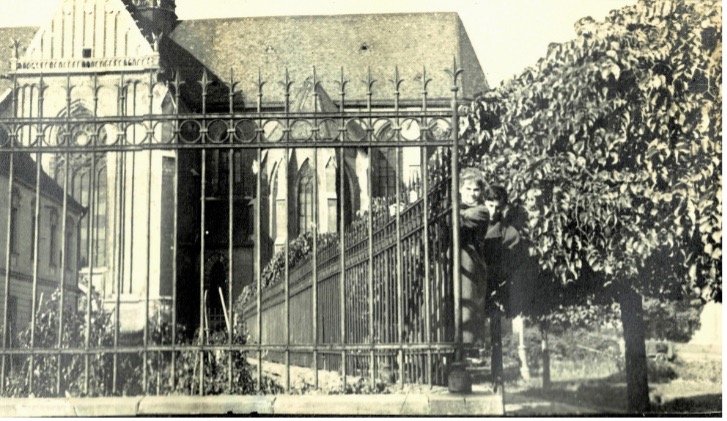 Brno, 1955. Us clinging to the fence round the church of St Thomas’s abbey

Now we had reached the square, we tried to get into St Thomas’s abbey garden, but this was not allowed. The photograph shows us clinging to the fence in the hope of getting a glimpse of it – but all we could see was a totally neglected patch of garden.

Back in Amsterdam the three of us went to see Professor Heimans and showed him the pictures we had taken. He was surprised and pleased to hear that the statue was still there. But he immediately began wondering about the source of his story that the statue had been destroyed.

And, he added with a serious look on his face, we also had to ask ourselves to what extent the Cold War atmosphere here in the West had allowed such a myth to start circulating and gain credence in the first place.

But, he ended with manifest relief, the omission of the illustrious Mendel’s name from the statue could most definitely be viewed as a kind of destruction.

We assumed that Heimans would henceforth include our information in his lectures – but we never bothered to find out. Much later we heard that the statue had been moved into the abbey garden soon after our visit. This made it even less visible to the general public, but its true identity had finally been restored. It is still there – and the object of admiration during the festivities marking the bicentenary of Mendel’s birth.