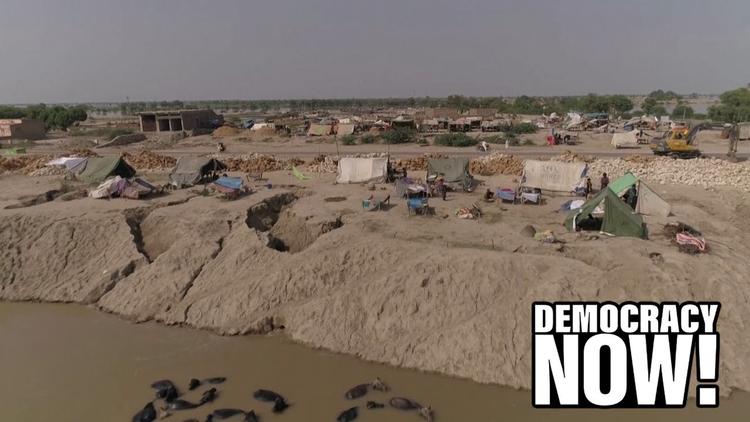 Some 45% of the cotton crop has been lost, along with billions of dollars in food crops, raising the specter of widespread starvation. $30 billion in damage has been done. 11 million people in Pakistan are newly food insecure.

Climate scientists are very careful about attribution. But these scientists wrote, “we found that the 5-day maximum rainfall over the provinces Sindh and Balochistan is now about 75% more intense than it would have been had the climate not warmed by 1.2C, whereas the 60-day rain across the basin is now about 50% more intense, meaning rainfall this heavy is now more likely to happen.”

The scientists are confident that the maximum five-day rainfall during Pakistan’s monsoon has been turbocharged by heating up the earth and its oceans.

They note, “The record rainfall that fell between 1st-31st August over Sindh and Balochistan were 726% and 590% of the usual totals for August in the respective regions … Pakistan as a whole received 243% more rainfall than usual during this period.”

The paper notes the heat wave this year, which saw temperatures as high as 122F (50C), contributed to an “an intense depression from the Arabian Sea, bringing heavy rainfall to the southern regions.” That heat wave is estimated to have been made 30 times more likely by human-caused climate change.

Repeated monsoon depressions in the Bay of Bengal, which usually sends rains to North India, headed like an express train for Sindh and Balochistan provinces of Pakistan. Eight such depressions sent this wet air over to Pakistan, where it fell as torrential rains.

Pakistan always has summer monsoons, and there has sometimes been some flooding. But this flood is like the one that Noah boarded his ark to escape. It is massive, with millions of people vulnerable to cholera and other diseases carried by dirty water. One of the big problems with flooding is that dirty water invades the drinking water. I didn’t boil my water enough during the monsoon in India one time and came down with hepatitis. It knocked me out for three days and I lost 75% of liver function. There will unfortunately likely be a lot of such cases in Pakistan in coming months. Oxfam has been working in the country for decades and will be sorely needed this time.