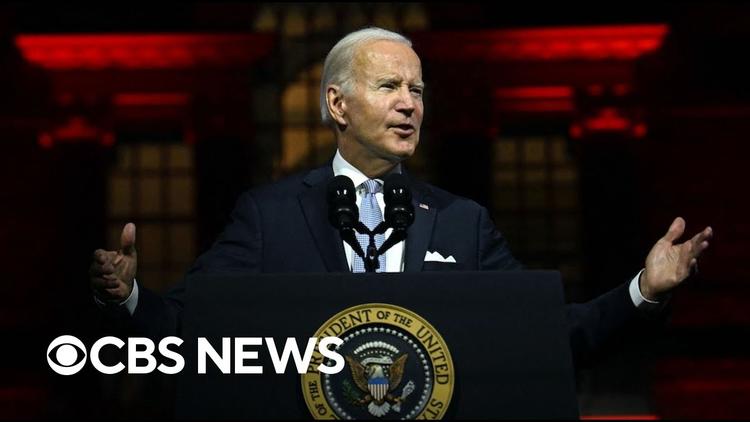 Ann Arbor (Informed Comment) – President Joe Biden came out swinging in Philadelphia in a rare Thursday evening prime time address, denouncing the “MAGA Republican Party” of Donald Trump while praising what he termed “mainstream” conservative Republicans. MAGA is the acronym for “Make America Great Again,” the fascist slogan that disgraced former president Donald Trump deployed to denounce immigrants, Muslims, Hispanics, Asians, and political liberals. The broadside identified an opponent in the Democratic Party’s attempt to remain in control of two of the three branches of government in November, and sought to divide Republicans by putting their MAGA members beyond the pale.

The speech also signaled that Biden smells blood in the water regarding Republican support for unpopular anti-abortion laws and regarding the general public’s disgust at the Jan. 6 insurrection.

Biden denounced the Trump branch of the Republican Party, which is far more hegemonic than Biden allowed, as political reactionaries:

They promote authoritarian leaders, and they fan the flames of political violence that are a threat to our personal rights, to the pursuit of justice, to the rule of law, to the very soul of this country.”

It was a great rhetorical ploy to play the Trump Republicans off against the mainstream conservatives, but the division is not as stark as Biden painted it. Minority Senate leader Mitch McConnell consistently votes against abortion rights and engineered the anti-abortion majority on the Supreme Court, so that isn’t just a MAGA position. McConnell was also behind the SCOTUS striking down the right to privacy. It is not clear that McConnell would vote for a federal law ensuring gay marriage rights or the right to contraception.

Article continues after bonus IC video
CBS News: “Biden delivers speech on “battle for the soul of the nation” in Philadelphia”

And while McConnell briefly denounced Trump for instigating the January 6 insurrection, he quickly came to heel when it was clear that his rank and file stood with Trump. That is, the “mainstream” conservatives Biden excepted from criticism are deeply implicated with MAGA semi-fascism except on the issue of who won the 2020 presidential election.

That McConnell and the Republican mainstream, however, decline to question the outcome of the last presidential contest is extremely important. In his speech, Biden seemed to conclude that the rejection of legitimate election results was the most alarming and menacing thing about the MAGA GOP, saying,

“And here, in my view, is what is true: MAGA Republicans do not respect the Constitution. They do not believe in the rule of law. They do not recognize the will of the people.

They refuse to accept the results of a free election. And they’re working right now, as I speak, in state after state to give power to decide elections in America to partisans and cronies, empowering election deniers to undermine democracy itself.”

It didn’t get a lot of play on cable tv news, but Trump actually demanded his immediate reinstatement as president this week. And more than two-thirds of Republicans hold the same position (yes).

Another knock on the attempt to exempt “mainstream” Republicans from opprobrium is that 70% of Republicans in polling continue to deny that Biden was fairly elected president in 2020. If this election denial is the most dangerous thing about the MAGA crowd, then that crowd has a super-majority among the GOP rank and file.

Aside from election denialism, Biden said, the other great danger of the MAGA crowd is that they believe in authoritarian leaders and in the legitimacy of deploying violence to win political goals. That is what Biden meant by calling the movement semi-fascist earlier this week, a remark “mainstream” Republicans falsely attempted to depict as demonizing all conservatives. Biden said,

“They promote authoritarian leaders, and they fan the flames of political violence that are a threat to our personal rights, to the pursuit of justice, to the rule of law, to the very soul of this country.

They look at the mob that stormed the United States Capitol on January 6th — brutally attacking law enforcement — not as insurrectionists who placed a dagger to the throat of our democracy, but they look at them as patriots.”

Trump’s attempt to stay in office and the violence he promulgated on January 6 are the most unpopular things about him for the general public, so Biden is preaching to the converted.

Jennifer Agiesta at CNN explains, “a public consensus has emerged that former President Donald Trump acted at least unethically in trying to hold on to his office after the 2020 election (79% feel he acted either unethically or illegally, including 45% who believe his actions were illegal), that he encouraged political violence in his public statements ahead of January 6 (61%) and that he could have done more to stop the attack once it had begun (77%). All told, the poll finds that 69% of Americans consider the January 6 attack to be a crisis or major problem for American democracy.”

She notes that only 36% of Republicans believe that the Jan. 6 invasion of the capitol — by people who said that they intended to lynch the Republican vice president — was a problem. A slight majority do say that democracy is facing a crisis in the US, but I have a sinking feeling that they mean by this that a Democrat is in the White House.

The percentage of Americans who tell pollsters they are Republicans fluctuates between 24% and 31%. So Biden is right that most Americans reject the MAGA positions. The problem is that small, tight-knit cadre organizations have been particularly astute in overthrowing governments during the past century.