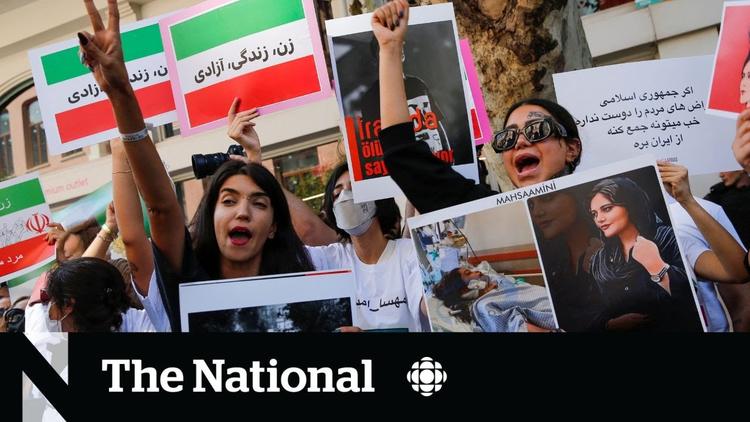 ( RFE/ RL ) – Two young Iranian women posted a photo of themselves having breakfast at a restaurant in Tehran without hijabs.

The same day, actress Fatemeh Motamed-Arya spoke at the public funeral in the Iranian capital without a headscarf.

On September 27, a video emerged of a woman without a hijab marching on a road in Tehran holding a placard that read, “Women, life, freedom.”

A powerful solo protest in the Iranian capital: a woman is walking hijabless with a sign that says: Woman, life, freedom.” #Mahsa_Amini #مهسا_امینی

Such acts of civil disobedience have increased in Iran, where the country’s “hijab and chastity” law requires women and girls over the age of 9 to wear a headscarf in public, since the death of a young woman in the custody of the morality police on September 16.

The death of 22-year-old Mahsa Amini has triggered over two weeks of angry protests in dozens of Iranian cities. During the ongoing rallies, some women protesters have removed and burned their headscarves, in a direct challenge to the clerical regime.

The protests have provoked a deadly state crackdown, with law enforcement and security forces killing scores of demonstrators, according to human rights groups.

While the protests appear to be waning, women’s resistance to the hijab is likely to increase, analysts say. The mandatory hijab, a symbol of the state’s repression of women, has been one of the key pillars of the Islamic republic.

“More and more women are likely to remove their headscarves in public and resist the compulsory hijab law,” Paris-based, Iranian-French sociologist Azadeh Kian told RFE/RL. “Until now, they didn’t dare to walk bareheaded in public. Today, they have found the courage.”

Kian adds that the authorities could be forced to loosen their strict enforcement of the hijab law. “Without changing the hijab law, they could become more lax towards women violating it, but they will pay a price because more women will be encouraged to follow suit,” she said.

A woman in Tehran who spoke on condition of anonymity for fear of retribution told RFE/RL that “things won’t go back to the way they were.”

“I used to remove my headscarf in some restaurants where I knew the owners,” she said. “I’m now determined to do it more often in public, it’s the least I can do after the death of Amini and the [state] violence,” she said.

The Financial Times reported on September 28 that in recent days the white and green vans of the morality police have disappeared from the streets of Tehran, although there is still a strong security presence in the city.

The hijab became compulsory in 1981, two years after the Islamic Revolution in Iran. The move triggered protests that were swiftly crushed by the new authorities.

Many women have flouted the rule over the years and pushed the boundaries of what officials say is acceptable clothing.

Women have also launched campaigns against the discriminatory law, although many have been pressured by the state and forced to leave the country.

In 2014, exiled activist Masih Alinejad launched a Facebook page where scores of women posted their photos without hijabs. She also later encouraged women to document the harassment they suffered by the morality police and vigilantes.

Three years later, a young woman identified as Vida Movahed stood on a utility box in Tehran and waved her headscarf on a stick in an unprecedented act of defiance against the hijab law. Photos of her protest went viral and inspired other women to stage similar protests.

More than 30 women were arrested, and several were prosecuted in the following months. Human rights lawyer Nasrin Sotoudeh, who defended them, was herself sentenced to prison.

The acts of civil disobedience prompted a debate about the hijab law, which had been a taboo topic for years.

Under former President Hassan Rohani, who served from 2013 to 2021, the enforcement of the hijab law was loosened. But since hard-line President Ebrahim Raisi came to power in August 2021, the authorities have launched a crackdown on women who violate the law.

A July 5 order by Raisi to enforce the hijab law resulted in a new list of restrictions on how women can dress.

In recent months, women judged not to have respected the “complete hijab” have been banned from government offices, banks, and public transportation. The notorious Guidance Patrols, or morality police, have become increasingly active and violent. Videos have emerged on social media appearing to show officers detaining women, forcing them into vans, and whisking them away.

On September 13, the morality police in Tehran detained Amini for allegedly wearing a hijab improperly. Three days later, she was declared dead in a hospital. Activists and relatives say she was killed as a result of blows to the head sustained in detention. The authorities claim that she died of a heart attack.

Since her death, Amini’s name has become a rallying cry against the decades of state violence against women, prompting protesters to call for an end to the Islamic republic. Amateur videos and footage posted online in the aftermath of her death showed unveiled women standing up to security forces while others were seen walking defiantly unveiled in the streets of Tehran and other cities.

Several actresses also posted images of themselves on social media without a hijab. One of them, Katayoun Riahi, appeared in an interview with a Saudi-funded TV channel without her headscarf.

Security forces reportedly raided Riahi’s house on the evening of September 28. She was reported to have fled before they managed to arrest her. Her whereabouts are currently unknown. A post by the administrator of her Instagram page warned on September 29 that her life was “in danger.”

Days earlier, Culture Minister Mohammad Mehdi Esmaili said that actresses who removed their veils in public would no longer be allowed to work inside the country.