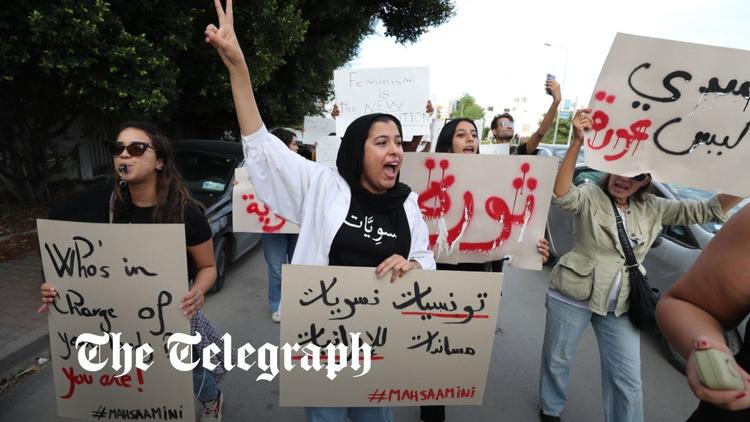 ( Middle East Monitor ) – For the past few weeks, protests have taken place worldwide in support of Iranian women to defend their right to choose what to wear and what not to wear. This came after demonstrations began in response to the death of a 22-year-old woman named Mahsa Amini in police custody. She had been detained three days earlier for violating laws regulating women’s dress, which mandate wearing a hijab.

While it was almost a joyous occasion to witness women uniting internationally against a blatant abuse of power, it was disappointing to see most failing to point the finger at the systemic problem – patriarchy.

It is thrilling to see women rise from afar about an issue that presumably may never affect them. However, it is disheartening to see double standards in action time and again. Such support and unanimity seem to be lacking when other women nearer to home are also victims of the patriarchal system.

For example, Republican Senator Marsha Blackburn, one of the House’s most conservative members, and Senator Lindsey Graham tweeted to show support for Iranian women and their right to freedom of their choices. However, these voices did not lift a finger in supporting women in the US who wish to have access to healthy abortions without the fear of being tracked, outed or arrested. They also appear to think that while the oppression and patriarchal ruling in Iran is unacceptable, it is completely justifiable when it comes to women in the US.

Similarly, the director-general of the Israel Foreign Ministry, Alon Ushpiz, tweeted a video with the caption “Israeli women stand with Iranian women”. Ironically, however, they need not look further to see the gender-based violence that women in the Occupied Palestinian Territories are subjected to by Israeli authorities. Such abuse is especially striking when we consider the torture and ill-treatment of Palestinian women detained, interrogated and imprisoned by Israeli security forces.

In the past year, Muslim women in India have been subjected to targeted attacks by right-wing extremists. They were routinely stripped of their rights to receive an education because of their headscarves. More than one in six Indians are Muslim. They are the largest minority in this Hindu-majority country. However, there appears to be a lack of outrage for the millions of girls and women who cannot receive an education because of a patriarchal ruling that decides what women can wear.

In January 2022, the French Senate voted 160 to 143 to ban wearing the hijab and other apparent religious symbols in sports competitions following a proposed amendment by Les Républicains. They argued that headscarves could risk the safety of athletes wearing them. Such absurd assertions are put forward even though numerous athletes have competed wearing the hijab at the Olympic Games.

Since April 2021, Muslim women in France already face restrictions on what they can wear in certain places: the full Islamic veil has been banned from public places (including streets, public transport, shops, hospitals and cinemas), following a law prohibiting the concealment of the face in the public space. The headscarf is authorised in all public areas in France, except for public schools, middle schools and high schools, following a 2004 law prohibiting wearing religious symbols deemed “conspicuous” in schools.

Let us not forget how the European Handball Federation, the sport’s governing body, fined the Norwegian women’s beach handball team at the European Beach Handball Championships. The players refused to wear bikini bottoms while playing. The fine of €1,500 (£1,295) was for “improper clothing”. Likewise, in 2021, double Paralympic World Champion Olivia Breen was told that her competition briefs were “too short and inappropriate” by an official while competing in the English Championships.

Gender-based violence and femicide are worldwide issues yet to be fully addressed globally. In a world where one in every three women and girls is a victim of violence, no one can claim that women are safer in certain places while they are more in danger in others. Women are not safe anywhere in the physical and digital worlds, period! The cause for all this is patriarchy, period!

Mahsa Amini was not killed because she was not wearing the headscarf properly; she was killed by a man who thought his duty was to oppress women. Sarah Everard was not killed because she was walking alone at night; she was killed because a man, whose job it was to protect the public, abused his power and killed her. Muslim women in the West are not the target of vicious hate crimes because of what they wear; they are the target of patriarchal decision-makers who exploit the visibility of Muslim women. As Egyptian-American journalist Mona Eltahawy questioned: “The patriarchy atop theocracy melange of Iran’s ‘morality police’ is easier to see because it is so visibly expressed in enforced hijab. Nevertheless, what is the enforced pregnancy of the Christian zealots in the US, but a melange of patriarchy built atop theocracy right here?”

So, to all women worldwide, we all have a common enemy: patriarchy. It is everywhere, some may be more visible depending on culture, background and religious beliefs, but it is there, sneaking into our minds one way or another. It is a hard battle to win, but not yet lost. To win it, we must fight for women’s and girls’ rights that are threatened everywhere, whether Female Genital Mutilation, equal-pay rights, birth rights, period rights, abortion rights or religious practice rights. We must stand up and be united against one enemy for women and girls everywhere!