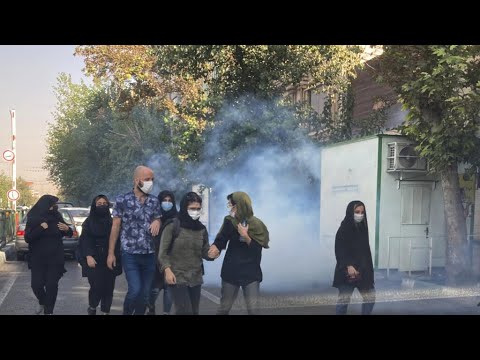 Ann Arbor (Informed Comment) – Dubai’s Al-Arabiya reports that on Sunday evening angry nighttime demonstrations broke out in numerous Iranian cities, as the wave of protests entered its fourth week. Videos posted to social media showed nighttime protests in the capital, Tehran, the Kudish cities of Sandandaj and Mahabad, and Zanjan.

Several of the videos spoke about gathering in Naziabad in Tehran.

Reuters reports that 185 people have been killed in the protests, though that is likely a gross underestimate, and that 19 of them were children.

On the other hand, a video from Saturday shows security forces defecting to the student protesters. If it is authentic and if it shows the beginning of a trend, this development could be highly significant.

Hengao, the Kurdish news site, said that people came out into the streets in the district of Kermanshah, in the town of Salas Babajani for the first time since the demonstrations began in mid-December after the death in custody of a Kurdish-Iranian woman, Mahsa “Zhina” Amini, 22. People in Sanandaj, the capital of Iranian Kurdistan, set fires in the streets to close them to security forces, shouting “Death to the Dictator!”

A rights organization reported the outbreak of clashes between protesters and security forces in Sanandaj.

In Mahabad, in Azerbaijan province, protesters organized a march in the streets and set fire in trash cans so as to put obstacles in the way of the police.

Iranian Kurds have been one of the backbones of the demonstrations.

University students have been another activist group. The Iranian government felt constrained to close all schools and educational institutes on Sunday (which is a work day in Iran).

Demonstrations were held in universities in Tehran, Arak, Qazvin and Gilan.

BBC monitoring notes that at Allameh Tabatabai University in Tehran students gathered and chanted, “Don’t think this is just for one day, we’ll be meeting every day.”

The BBC Telegram channel posted video of students at a Tehran university comparing the government’s paramilitary goons, the Basij, to the Hard line terrorist organization, ISIL.

This comparison is significant, since ISIL is Sunni and Iran-directed Shiite forces fought it in Iraq and Syria. The students are saying they don’t find much to choose between the two.

Another BBC video showed university women in the eastern holy city of Mashhad chanting that “the target is the political system itself,” and “death to the dictator.

In another instance, security forces came on a campus to arrest activist students for demonstrating, but were stopped by the students’ parents.

High school women and college students put up illustrated protest placards in dozens of Iranian cities early Sunday morning. They were met by aggressive security forces who used tear gas against them.

In the southern port city of Bandar Abbas, high school women took off their veils and went to the streets chanting anti-government slogans as security forces chased them.