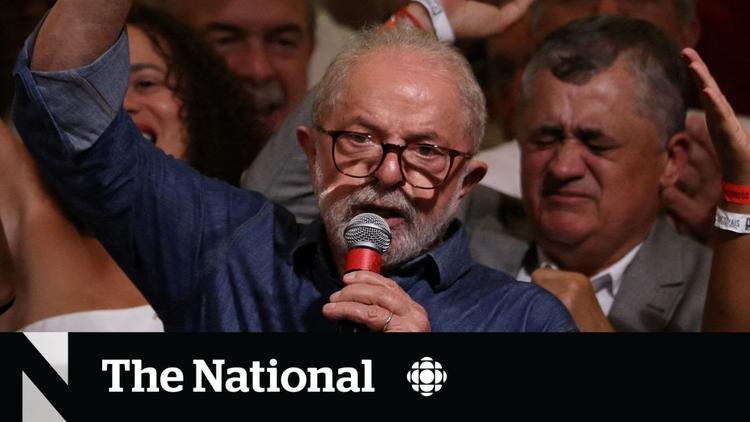 Ann Arbor (Informed Comment) – Luiz Inacio Lula da Silva was elected on Sunday to his second (non-consecutive) term as president, in a victory for planet earth as well as for Brazil. He first served 2003-2010. Since 2019, Brazil’s president has been the far right demagogue Jair Bolsonaro, who just lost to the leftist da Silva, affectionately known by his nickname “Lula.”

The reason I say that da Silva’s victory is a win for the planet is that the fate of the Amazon rain forest hangs in the balance. Bolsonaro, was determined to destroy it by turning it into big agricultural estates, mines and other endeavors of barracuda capitalism. The Amazon and other rain forests are major carbon sinks, sucking carbon dioxide from the atmosphere. But rain forests can be flipped by deforestation and wildfires, so that they end up emitting far more carbon than they absorb. With its extent reduced by 20% in the past 50 years, the Amazon is teetering on that precipice, and some environmentalists fear it may have fallen off the edge already. Certainly, a few more years of Bolsonaro’s depredations would spell doom for the rain forest and would exacerbate the climate crisis.

The issue is wrought up not only with planetary ecology but with a vicious class and ethnic struggle inside Brazil. The people who live with the Amazon and make use of its resources without destroying them are largely indigenous Brazilians. There are about a million of them, comprising 305 tribes.

Survival International explains, “The government has recognized 690 territories for its indigenous population, covering about 13% of Brazil’s land mass. Nearly all of this reserved land (98.5%) lies in the Amazon.”

Bolsonaro, a notorious racist, lamented that land had been reserved for “Indios,” as they are called in Portuguese. He saw the latter as uncivilized barbarians who had unfairly blocked the mining of tin, gold and other minerals in the river basin and who stood in the way of the expansion of the estates of militant Brazilian ranchers. He promised, “In 2019 we’re going to rip up Raposa Serra do Sol [Indigenous Territory in Roraima, northern Brazil]. We’re going to give all the ranchers guns.”

Bolsonaro’s racism combined with his capitalist rapaciousness and his desire for political backing from ranchers and mining concerns to make exploiting the Amazon a top priority. Just in the first two months of this year, space photography showed that 166 square miles of the rain forest was cleared. In the previous decade the average amount of land cleared in any two-month period was less than half that. Bolsonaro’s policies were accelerating the clearing.

In contrast, Lula wrote an op-ed for the French newspaper Le Monde this weekend in which he said, “Today, the urgency of climate, mounting inequalities and geopolitical tensions reveal the gravity of the crisis that affects our planet. Unfortunately, Jair Bolsonaro continues to aggravate this situation in embracing climate change denialism and attacking the institutions of our democracy, and in promoting intolerance. These characteristics of his government have made Brazil a new pariah on the international scene. This cannot go on.”

Reuters Brazil reports in Portuguese that Celso Amorim, the principal foreign policy advisor to Lula, told the wire service, “If elected, Luiz Inácio Lula da Silva should propose the holding of a summit of nations of the Amazon rainforest in the first half of 2023, to which developed countries interested in its conservation would also be invited.”

Reuters concluded from Amorim’s remarks that the “global repositioning of Brazil on the issue of the environment and the climate crisis will be a priority of the foreign affairs agenda in a possible new Lula government, in a context in which deforestation of the Amazon is at the highest level in 15 years.”

Since the Amazon is a regional, hemispheric and global issue, the international community needs to support Lula’s efforts. There needs to be substantial reforestation and attention to repairing its health and to protecting it from the wild fires (also caused by global heating) that have piled on human clearing efforts to reduce its extent.