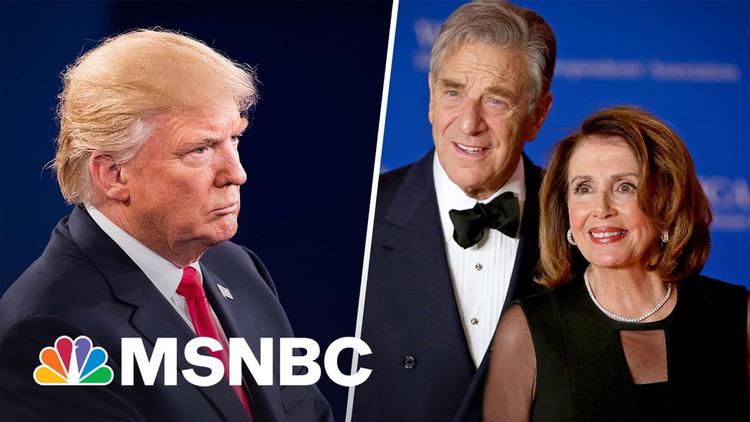 Ann Arbor (Informed Comment) – President Joe Biden noted Friday evening — concerning the assailant who fractured Paul Pelosi’s skull with a hammer in the Pelosi home in San Francisco — “that the same chant was used by this guy that they have in custody that was used on January 6, the attack on the U.S. Capitol.” Both that attacker and the insurgents chanted “Where’s Nancy Pelosi?” That is, the president suggested, the attack on the Pelosis was a continuation by other means of the violence that Donald Trump unleashed on January 6, 2021.

A lot of the blame for the demonization of Speaker of the House Nancy Pelosi must be laid at the feet of former President Donald Trump, who cultivated violent militiamen as his black shirts, and has often vilified Pelosi, putting a target on her and her family. Trump called her “Crazy Nancy” from a San Francisco district that he characterized as “filthy” and “dirty.” He spoke of his first impeachment in the House for holding up military aid to Ukraine to blackmail President Volodomyr Zelensky into manufacturing dirt on the Bidens as the “bogus impeachment scam.”

In a bizarre, rambling letter on the impeachment, Trump accused Pelosi of waging “open war on democracy,” of “violating your oaths of office,” and “breaking your allegiance to the constitution.”

In other words, he called her a traitor to the United States.

ISIL specialized in what has been called “stochastic terrorism,” whispering to unbalanced people on social media that “wouldn’t it be nice if some pious person blew up X?”

“Stochastic” is a fancy way of saying “random.” Basically, rather than running a terrorist cell with a hierarchy of command and control and direct agents carrying out the deed, the stochastic terrorist puts out a call for lone wolves to do their thing. They then cannot be traced immediately back to the origin.

Molly Amman and J. Reid Meloy explain, “Stochastic terrorism has been defined as the incitement of a violent act through public demonization of a group or individual. Stated another way, the term has been said to mean “acts of violence by random extremists, triggered by political demagoguery.”

As I pointed out in 2018, Trump’s methods closely resemble those of stochastic terrorists.

Trump unleashed the mob on Jan. 6 with his tweets, in one of the most serious acts of stochastic terrorism in modern U.S. history. Mark Follman wrote insightfully at Mother Jones about Trump’s malevolent influence on the insurrectionists. In essence, the San Francisco assailant was part of the same operation, only he acted later than the others.

During the Republican shut-down of the government in 2019, Trump canceled a planned trip by Speaker Pelosi to Afghanistan and some other countries. He then suggested she fly commercially if she had to go, given that government employees were not then being paid — because the Republicans wouldn’t fund the government.

Pelosi in reply pointed out that broadcasting to the world that she might be flying commercially put her and her delegation in danger, says Molly Mulshine at Elle. Pelosi said, “The fact that they would leak that we were flying commercial is a danger not only to us but to other people . . . very irresponsible on the part of the president.”

He went on to imply that Pelosi is an extremist and beyond the pale, Mulshine points out. He tweeted, “Nancy Pelosi has behaved so irrationally & has gone so far to the left that she has now officially become a Radical Democrat.”

In Republicanese, he may as well have just come out and called her a Communist and been done with it.

In 2020, asked about his disgraced former national security adviser, Michael Flynn, Trump said, “Pelosi is a sick woman. She’s got a lot of problems, a lot of mental problems. We’re dealing with people that have to get their act together for the good of the country,”