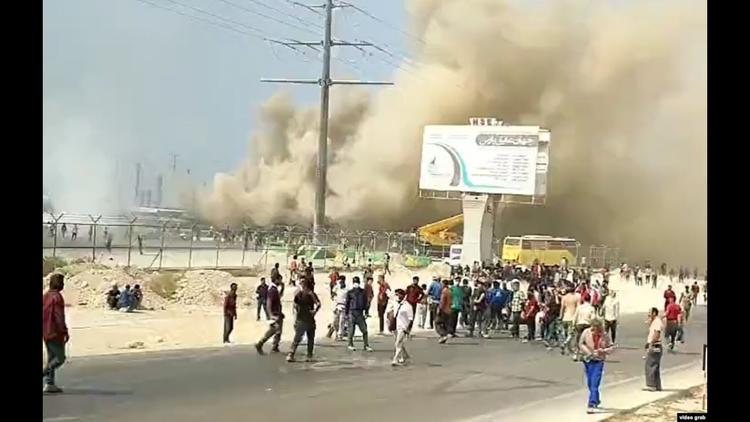 The student protests continued in Iran on Monday, as youth rallied at the University of Shiraz and at several campuses in the capital of Shiraz. They pledged to multiply their movement every time another youth was killed. Nearly 200 people have died because of the repression of the protests according to official statistics, which are thought to be gross underestimates. One of the interesting developments was that some disgruntled oil workers announced a strike, joining in.

In their announcement on Telegram the workers called on their colleagues throughout the petroleum and petrochemical sector to join their strike “in support of the massive protests of the people.”

Of course, there may not be many workers on strike as yet, but this development is significant. So far, the protests of autumn 2022 have been a youth revolt, spearheaded by young women in high school and college and supported by male youth as well. Iran is admittedly a young country. In 2010, perhaps 60% of Iranians were under 30. That statistic may be out of date because since then the birth rate has plummeted and Iran is now one of the more rapidly aging countries in the world. Still, it is likely that over half the population of some 86 million is still under 30.

Even so, youth do not have their hands on the levers of power. For things to change a lot, an alternative center of power must emerge in the institutions of the adults. When the government has a rival for the loyalty of the people, sociologists call that a condition of “dual sovereignty,” and see it as a potentially revolutionary situation. But in order for that alternative to emerge, you need fissures in the major social classes. As Arshin Adib-Moghaddam argues, at some point it would be helpful if a section of the military defected to the new power center. In 1978-79, the shah’s Air Force went over to Ayatollah Ruhollah Khomeini.

In the 1978-79 Islamic Revolution in Iran, as well, the oil workers went on strike in support of Khomeini and against the shah. They hoped a new government would be to the left of that of Mohammad Reza Shah, but they were sorely disappointed when the ayatollahs took over and adopted right-wing economic policies.

So it is not clear whether the strikes announced Monday are among any significant number of workers, nor that they necessarily have staying power. But these labor actions are a sign that the protests are beginning to be something more than a mere youth revolt, and that could well be significant.

Some of these workers are in the port of Asaluyeh in Bushehr Province, along the shores of the Gulf. It now has a population of around 15,000, but is the site of a planned enormous gas and petrochemical complex. A deep water port, it is a new city and is still being built out. It was chosen for its proximity to the South Pars fossil gas field, but it also has oil refineries. Plans for its development have been stunted by the Trump administration’s financial and commercial blockade of Iran, which has been continued by the Biden administration. According to the Saudi-backed Iran International, high post-COVID inflation is hurting the standard of living for workers in Iran just as it is in the US.

Worse, the workers are facing a double whammy of both US boycotts and climate change. On several days in August, the temperature hit 122 degrees Fahrenheit (50C) and maybe even more. The companies that the government subcontracts with refused to give workers days off, and Iran International estimated that 100 per day were collapsing and having to be given medical care. I don’t know what the humidity was, but a combination of 122 degrees F. and humidity of 80% or more has recently been determined to be lethal to human beings.

So it is not surprising that on September 29, the workers had threatened to strike, both for economic reasons and in support of the protesters of Mahsa “Zhina” Amini’s death in custody. They issued this manifesto then:

We, the regular workers in branches of the petroleum industry, strongly condemn the murder of Mahsa Amini, which was really a warning to all of us, and cannot ever be justified for any reason. Such crimes have touched all of our hearts.

We declare our unambiguous support for the people’s protests on the street and we are part of the same people, whose lives and dignity have been trampled by this despotic and inhumane government for more than forty years, right up to today. Among those, today our livelihood has reached a point where there are no guarantees or conditions left for us, the people, that can be tolerated. We ourselves witnessed that when we gathered and pursued our demands: They arrested our co-workers and filed a case against them.

We will no longer accept the continuation of these slave-like conditions of life and work. We had given an ultimatum that if our demands are not answered, we will come to the streets with our families, and now not only have our demands not been answered, but the rulers have responded to the protests of we the people with repression and bullets.”

They warned that if their working conditions and pay did not improve, and if the regime continued its repression of the people, “We will cease working and will, with our families, gather in lockstep with the people.”

On Monday, October 10, at least some organized oil and gas workers in Asaluyeh and Abadan did go on strike, as they had pledged.

The regime dismissed the work stoppage as a mere ploy for increased wages, but the Asaluyeh workers were forthright that their working conditions and wages were one of their motivations. It is clear from their statement that those are not, however, the only things driving them. They deeply resent how the Iranian government is dealing with dissent, and their hearts go out to youth like Mahsa and others who have been killed by security forces for no good reason. They also seem just not to like the Islamic Republic very much, which has long been true of the underground Iranian Left, but is now being openly expressed.