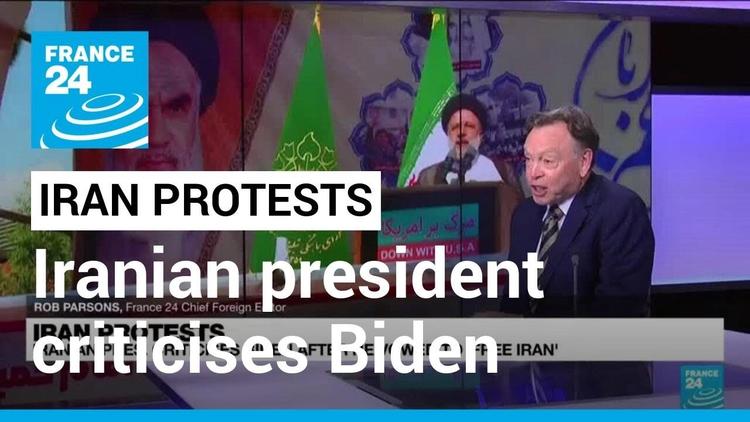 Biden’s pledge drew a sharp rebuke from Iranian president Ibrahim Raisi, who said the Iranians had already freed themselves with their 1979 Islamic Revolution and Biden should please keep his mitts off their country.

On Friday, National Security Council Communications Director John Kirby tried to clean up Biden’s exuberant comment. “He was expressing, again, our solidarity with them [the protesters],” he said. “The president’s been pretty clear about this … we’re going to continue to look for ways to hold the regime accountable for the way that they’re treating their own people.”

Obviously, giving verbal moral support to the protesters, saying “Go protesters!” is a little different from “freeing Iran.” Though, note that Biden did go on to say, “they’re going to free themselves pretty soon,” giving them the agency.

Biden’s comment makes it easier for the Iranian government plausibly to depict the demonstrators as CIA agents, though to be fair they will do that whatever Biden says. This consideration had caused President Barack Obama to be cautious about speaking out in favor of the 2009 Green Movement, which the ayatollahs successfully repressed.

Those forces in the expatriate Iranian community who want a strong US intervention, even a military intervention, to overthrow the Iranian government vocally blamed Obama’s silence for the failure of the Green Movement, as though some US presidential cheer-leading could have made a difference on the ground in Iran. This charge against Obama was mere propaganda by the People’s Jihadis (Mojahedin-e Khalq or MEK) terrorist organization based in Albania, by far right wealthy Iranian expatriates in southern California, and by American Republicans taking their cues from the former. The People’s Jihadis have paid tens of thousands of dollars to individual Republican politicians such as Rudi Giuliani to attend their cult ceremony in Albania. ABC news reported that the Jihadis get money from Saudi Arabia.

Biden and his team appear to have given way too much credence to this propaganda, and they don’t want to be vulnerable to the kind of negative gossip that was directed at Obama, so Biden is speaking up.

But is it really good for Iran’s protest movement to appear to be backed by the United States, which had been the neoimperial power in Iran until 1979, and which most Iranians were glad to see kicked out of their country?

“A few hours ago I became aware that the US president has spoken words that may have arisen from his having been distracted, because in the past such claims were not made in official forums. Apparently, he said, ‘we intend to liberate Iran!’ Mr. Biden! Iran was freed from your talons 43 years ago, and it is determined not to fall captive to you again, and we will never be your milk cow.”

Raisi does not appear to be much liked in Iran, with charges hanging over him of having been involved in massacring prisoners in 1988. That is not the same thing as saying that young Iranians would like to see US troops do to Iran what they did to Iraq.

Mohammad Reza Shah Pahlevi was restored to the throne in a CIA-backed coup in 1953, and went on to become one of the world’s more oppressive rulers, accumulating more prisoners of conscience than the Soviet Union. Archival evidence shows that the US pressed the shah to keep petroleum prices low, so that essentially he was acting on behalf of his Washington patrons rather than on behalf of the Iranian people, who would have benefited from higher petroleum prices, since oil money flowed into Iranian government coffers. By 1978-79 millions of urban Iranians hated the shah and everything he stood for, and they weren’t very happy that the US had saddled them with him and was continuing to support him.

In fall 1979 young Iranian activists invaded the US embassy in Tehran and took its personnel hostage. Raisi was speaking to one of the annual rallies held in Iran to commemorate this action against the US.

Nowadays, Gen Z clearly has negative feelings toward the rule of the ayatollahs, but there is no evidence that they are pro-American or want an American intervention. Rather, they are taking action at a local level,themselves.

I think Obama probably had it right in 2009 when he avoided the appearance of intervening on behalf of the protesters. Biden and his team should just stand firm against the right wing propaganda, and express his hope that the Iranian people’s will is fulfilled. He cannot actually affect the outcome of the youth protests, and should avoid the impression that he can.