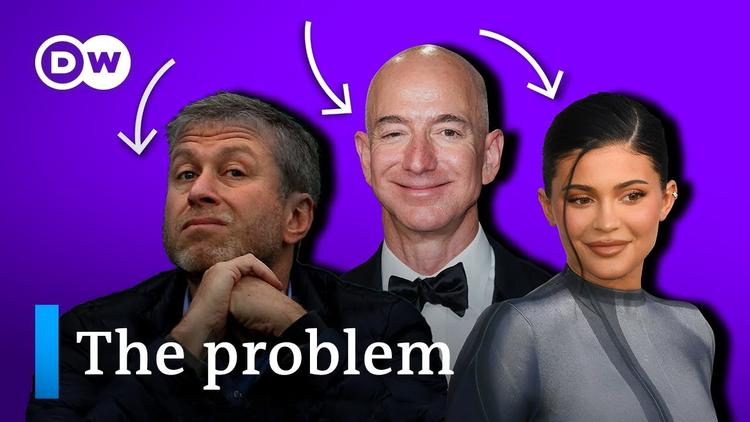 The Executive Summary says that they concluded that quite apart from the 3,300 or so billionaires, the wealthiest one percent in the world emit twice as much carbon dioxide as the bottom 50%. The top one percent, about 80 million people, are a big carbon problem, because if they go on as they are, their CO2 emissions alone will be 30 times larger than is compatible with keeping the heating of the earth to only 1.5°C above preindustrial times– the goal of the 2015 Paris Climate agreement.

Zeroing in on 150 billionaires in the sample, a tiny proportion of the top one percent numerically but a significant proportion of the latter’s wealth holdings, the study found that together they had a stake in 183 companies that is valued at $2.4 trillion.

If you calculate how many greenhouse gases are emitted by these 183 companies and look at how much of them is owned by each billionaire, you come to the conclusion that each of these fabulously wealthy persons is responsible for the emission of 3 million tons of carbon dioxide each year. An average person is estimated to emit 2.7 tons of CO2 every year. Thus, a million times more.

Article continues after bonus IC video
DW Planet A: How the rich wreck the climate (and how to stop them)
DW Planet A

Nafkote Dabi, Climate Change Lead at Oxfam, observed that these super-wealthy polluters “have escaped accountability for too long.” She added, “Emissions from billionaire lifestyles, their private jets and yachts are thousands of times the average person, which is already completely unacceptable. But if we look at emissions from their investments, then their carbon emissions are over a million times higher.”

Public awareness of this problem is growing, however. On Monday, Extinction Rebellion and Greenpeace climate activists stopped private planes from taking off from a field at Amsterdam’s Schiphol Airport. Some sat against the wheels of the planes, others bicycled around the field. Inside the enormous airport, protesters waved picket signs and denounced that increase of private jet traffic in the Netherlands. Airplanes emit about 2.5% of the carbon dioxide humans put into the atmosphere each year. But the per capita amount is much higher for private jets that ferry around one or two persons. Eventually the police aggressively arrested them, as the protesters went limp and had to be dragged to paddy wagons.

It is, however, the oil and coal companies in which the billionaires have invested that produce the most carbon dioxide.

Out of the 125 billionaires examined, only one had investments in green energy. About 14% of their investments were in industries such as oil and coal and cement, all high-carbon enterprises.

If the 3,300 billionaires in the world would just move their investments to sustainable, low-carbon industries, they would decrease the intensity of carbon emissions by a factor of four.

Dabi urged that governments use taxes and fines as a way of encouraging these billionaires to go green.

Oxfam has some recommendations in this regard to the COP27 climate summit now being held in Egypt: