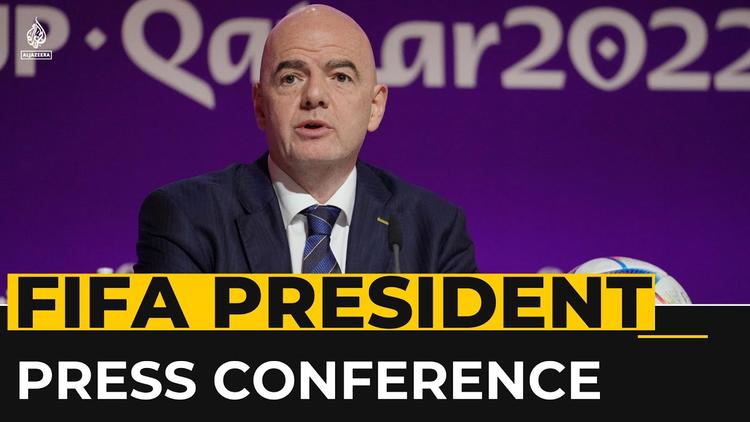 Belfast (Informed Comment) – The entire Arab world is excited as one of the world biggest sports events, the FIFA World Cup is held in an Arab Muslim country for the first time. This excitement is because of decades of collective feeling of frustration with being portrayed by Western media as backward, uncivilized and savage.

To illustrate this, in the 1990s, a friend told me that a Western doctor who he accompanied in a day visit to the West Bank told him the Muslim women they met didn’t look Muslims because they were educated and beautiful. Another Western man told me that his favorite Palestinian city was Nablus but he did not want to go there because its population are almost entirely Muslims and prefers to visit Bethlehem and Ramallah as they have more Christians. Based on that I advised a Western tourist to visit Ramallah while she was in Jerusalem. She told me the church she was visiting advised her to avoid Arabs and Muslims and that going to the West Bank was dangerous.

It is, therefore, not surprising that there is a campaign to discourage football fans from traveling to an Arab country. Admittedly, some critics of the Qatar World Cup there are sincere people with genuine human rights concerns. Let us, however, examine the issues raised by the press. White nationalist Rupert Murdoch’s right-wing British newspaper, The Sun published an article entitled “…Only six percent of Brits believe Qatar should host 2022 World Cup. It highlighted issues like the high price of alcohol and accommodations. The newspaper suggested moving the tournament to England. Note that there have been forms of alcohol ban in Italy and France at World Cup tournaments.

The Times cited such issues as LGBTQ rights and the deaths of migrant workers who helped building the tournament venues. Yet the World Cup in Russia was not criticized despite the harsh treatment of LGBTQ persons there, and many World Cups were held in Western countries at a time when LGBTQ rights did not exist there. Migrant workers in Qatar have a lower fatality rate than they do in their home countries, though admittedly this statistic does not include infant mortality at home. It seems likely that the workers’ fatality rate as guest workers is similar to that in their countries of origin. Official Qatari numbers show that 37 workers died building the stadium, but with millions of guest workers in Qatar, this is not out of line with the expected death rate. The Guardian printed an op-ed on the subject with a highly misleading headline that implied that there had been 6500 such deaths, which the article beneath the headline did not allege. The false number has nevertheless gone viral. All this is not to say that there is no room for improvement in the treatment of migrant workers in Qatar. Bandying about phony numbers, however, is irresponsible.

Migrant workers in Qatar typically earn ten times there what they did in their home countries. The World Bank argues that more labor migration to rich countries could transfer $1.7 trillion to the developing world. World Bank economists have also estimated that migrant workers from low-income countries who work in a Gulf oil and gas state for three years and live frugally during that time can accumulate enough wealth permanently to move up half a class back home. That is, members of the working class can become lower middle class, and those from the lower middle class can become middle class. Returning workers often open a business.

Professional journalism implies representing both sides of the story. An AlJazeera program in Arabic devoted one episode to dealing with this issue. Former professor and Oxford lecturer, Farhang Jahanpour told the program that the reasons behind the call for the boycott are economic and political as some Western media outlets will lose money due to broadcasting rights. The program highlighted that Rupert Murdoch who owns The Sun and FOX News complained to FIFA that the timing of the event will cost him money. The program also revealed that The Daily Telegraph, which is partially owned by Qatar’s rival Saudi Arabia, promoted relocating the world cup elsewhere by falsely trying to link Qatar to extremism.

Furthermore, the general secretary of the International Trade Union, Sharan Burrow told the program that the Guardian figure was a mistake as this included all deaths of all causes since the start of construction not only deaths related to construction work. On the same topic, FIFA Ethics and Regulations Watch campaign director in London Alistair Thompson said that the Western media did not pay much attention to an Amnesty International report which highlighted improvements in work regulations and rights in Qatar.

Marc Owen Jones, an associate Professor in Middle East Studies at HBKU pointed out that Western media tends to report negatively on smaller, less powerful and less visible countries when they host major sports events. Moreover, when it comes to Arab and Muslim countries, Western media tend to represent them negatively. In comparison with the last world cup in Russia, the British press was more lenient with Russia and separated its coverage of the World Cup from Russia’s brutality.

In France, another country with a colonial history in the Middle East, some cities decided to show black screens in public places instead of World Cup games. Unlike the British press, however, the French press didn’t attempt to hide its Islamophobia. One French Newspaper depicted Qatar football team as terrorists. Speaking to Aljazeera program, founder and director of the French Institute for International and Strategic Affairs, Pascal Bonifac was more straightforward and said some hate the idea that a Muslim country is hosting the world cup. A Brazilian former sports minister also highlighted that the Western press don’t like it when major events are held in the southern hemisphere and they gave Brazil and South Africa some hassle when they hosted the World Cup.

The hypocrisy is clear when we consider that few in Europe were concerned about human rights when the 2019 Eurovision Song Contest was held in Israel, which is militarily occupying 5 million Palestinians deprived of basic rights, or seemed to care Europe immigration policy causes the deaths of thousands of immigrants in the Mediterranean annually. Some critics –a minority– are genuinely concerned about human rights but it is obvious that the main reason behind calling to boycott this World Cup is because it is held in an Arab Muslim country. The Western media which have long demonized Arabs and Muslims hate to allow the world to see anything positive happening there. For a lot of people outside the Western world, this is a case of West is best that re-enforced the racist idea of clash of civilizations and the illusion of Western supremacy.

Nobody, however, said it better than the European FIFA president Gianni Infantino: “We are told to make many lessons from some Europeans, from the Western world. I’m European. I think for what we Europeans have been doing for 3,000 years around the world, we should be apologising for the next 3,000 years before starting to give moral lessons to people.

“How many of these European companies who earn millions and millions from Qatar or other countries in the region — billions every year — how many of them have addressed migrant-worker rights? I have the answer: none of them because if they change the legislation it means less profits.”