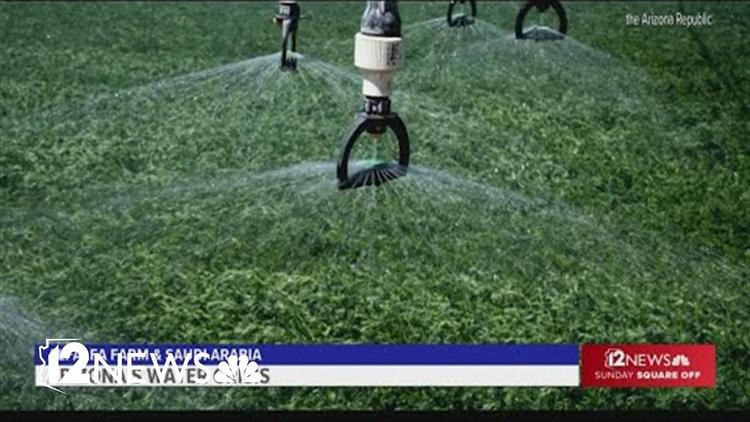 Ann Arbor (Informed Comment) – Ella Nilsen at CNN has done an excellent deep dive on the shrinking aquifers of the Southwest and how Arizona has allowed a Saudi and a United Arab Emirates company to establish water-hog farms to grow crops to be shipped back to the Middle East.

Saudi Arabia is a country of about 22 million citizens and as many as 13 million guest workers, so it is nearly as populous as California. Yet, much of the country is desert or poorly watered steppe with low rates of annual rainfall, of between 2.5 and 3 inches a year in many places. In the deep-desert Empty Quarter of the southeast, sometimes it doesn’t rain for 10 years at a time.

It is estimated that for high yields of crops, farmers need 18 to 20 inches of rainfall a year. So, Saudi Arabian farmers simply cannot raise crops such as alfalfa, which require a lot of water.

Further, Saudi Arabian farmers have completely depleted their own aquifers.

Saudi Arabian livestock farms were keeping 360,000 cows in the mid-teens of this century, but in 2019 that number jumped to 700,000. Since Saudi water resources are insufficient to raise the alfalfa needed to feed these cows, the Saudi firm Almarai established an American subsidiary, Fondomente, which has leased land in Arizona to grow this feed crop. The alternative would be to import beef and milk from someplace where producing them makes sense (i.e. neither Saudi Arabia nor Arizona).

The hitch, though is that much of Arizona, especially the southwest, gets only 4 inches of rain a year and isn’t much better than Saudi Arabia. Farming depends heavily on irrigating off rivers or using underground aquifer water. As for the Colorado River, it is at historic low levels.

Aquifers can be replenished by rainfall, but given the great Southwest Megadrought that began around the year 2000, many of them are having their water pumped out and not replaced. In some areas of the state, people could dig down 100 feet and hit water. Now, the water table is more like 500 feet, Nilsen says. And, the aquifers could be emptied out entirely if the state legislature refuses to act.

Nilsen argues that although state law prohibits the export of Arizona water, using that water to produce crops like alfalfa for cattle back in Saudi Arabia is a stealth way of exporting it.

Moreover, the Saudis are getting the water cheap. Nick Cleveland-Stout writes at Responsible Statecraft, “Fondomonte, a subsidiary of Riyadh-based Almarai, has the bargain of a lifetime: for only $25 per acre annually, it can pump as much water as it wants. Nearby farmers pay six times more than the Saudi company. ” Ordinary Arizonan farmers have to pay 6 times that to lease land and get access to aquifers.

Cleveland-Stout quotes Holly Irwin, who serves on the La Paz County board of supervisors as saying, “We’re not getting oil for free, so why are we giving our water away for free?”