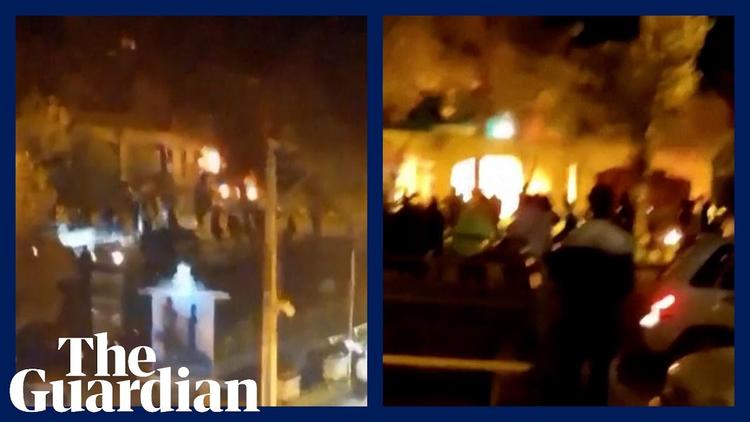 Ann Arbor (Informed Comment) – Reuters reports that social media sites carried video allegedly from Thursday night in the small town of Khomein in Iran, which appeared to show protesters setting fire to the childhood home of Ayatollah Ruhollah Khomeini, the founder of the Islamic Republic of Iran. Khomeini died in 1989. The house had been turned into a museum.

If it is true, it is sort of like angry American crowds marching on Mount Vernon and setting fire to the home of George Washington. Social media videos from Iran, which has been embroiled in nationwide women- and youth-led protests since mid-September, often carry audio of demonstrators cursing Khomeini.

The protests were sparked by the death in the custody of the morals police of Mahsa Zhina Amini, a Kurdish young woman who had been arrested for being insufficiently veiled while on a visit to the capital, Tehran. Many more young women have since been killed by security forces charged with repressing the protests, most recently Aylar Haghi,a medical student in Tabriz, who was allegedly thrown from the roof of a building where she sought refuge by Iranian security forces. They say she accidentally fell into a construction site. There has been an epidemic of young Iranian women accidentally falling off buildings, if the Iranian authorities are to be believed.

The BBC tweeted about the fire at Khomeini’s home:

Protestors in the city of Khomein have burned down the childhood home of the late Ayatollah Khomeini, founder of the country's current theocracy. The symbolic significance of this move against the most revered figure in the Islamic Republic cannot be overstated.#MahsaAmini pic.twitter.com/vmoJfj3NAX

The Guardian also showed this footage:

Khomeini had been born in Khomein in 1902. Some of his ancestors had traveled in British India, and the regime of the shah, Mohammad Reza Pahlevi, made the error in 1978 of having an op-ed published in a prominent newspaper accusing Khomeini of being a British spy.

Khomeini studied in the holy city of Qom in the 1920s. By the 1940s he was circulating writings critical of the government of Mohammad Reza Pahlevi. A deeply conservative man who represented the values of rural, small town, religious Shiite Iran, he complained endlessly about Western influence in Iran. In 1963 he joined in protests against the shah’s “White Revolution” modernization program and was arrested. He was exiled, first briefly to Turkey in 1964, and then to the Shiite seminary city of Najaf in Iraq. There, he produced his tract Islamic Government in which he argued that in the absence of the Prophet Muhammad and the line of his descendants or Imams, the Shiite clergy should head the government.

Although Khomeini represented this theory as traditional, it was a stark departure in Shiite thought. I have long believed that these ideas were influenced by the modern mass parties in Iraq of the Communists and the Baathists, who accepted from Vladimir Lenin the notion of the revolutionary vanguard of intellectuals. Lenin believed that where blue collar workers declined to take up their historic role as revolutionaries because they had had the wool pulled over their eyes by capitalists and industrialists, it was incumbent on clear-sighted intellectuals to take up this revolutionary role instead. Just as Lenin’s Soviet Union was to be ruled by intellectuals (including bureaucrats), so Khomeini’s Islamic Republic would be run by seminary-trained clergy, the Shiite “vanguard.” This is only a theory– I can’t prove it. But it makes historical sense.

The women and youth who have been protesting this fall have often gone beyond demanding a bit more personal autonomy and freedom to choose their own clothes to critiquing radically the entire notion of an Islamic state. Although romantics such as Khomeini thought they were bringing back a medieval institution that had lapsed with modernity, actually, in the medieval era Muslim societies were ruled by kings and conquerors who only sometimes cared what religious jurists thought about the character of Islamic law. Many of the kings liked a fine wine and a wild party. Muslim canon law was administered in urban areas by jurists appointed by kings. In rural areas most law was customary, based on custom, or decided by appointed governors. Only women of the urban upper classes veiled. Women of the pastoral nomads rode horses and camels and went unveiled. Peasant women working in the field were unveiled. Perhaps only 10 percent of people were urban, so jurists’ norms were unknown to most of the 90% who lived in small villages. Most people decided for themselves how pious to be, and clergymen were more counselors and pastors than commanders. Khomeini’s notion of a puritan Muslim society regulated by an ideal Islamic law administered by trained clerics is an illusion. His was a very modern project, and like the modern projects of Communism and Fascism, it has deteriorated into a dreary dictatorship.

Whether the young people managed to set fire to his house or not (and perhaps they only damaged a back wing of it), they were demonstrating in front of it, and rejecting Khomeini’s vanguard of the clergy in no uncertain terms.