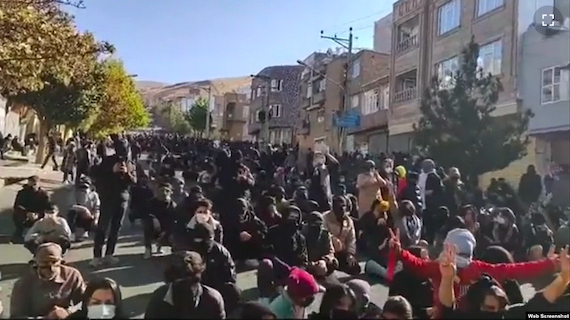 ( RFE/RL ) – Iranian authorities have intensified their deadly crackdown in the country’s western Kurdistan region, which has been the epicenter of the anti-establishment protests that have raged for months.

Human rights groups say government forces have killed more than a dozen people in predominately Kurdish cities in the past 24 hours. The bloodshed comes amid reports of heavily armed troops being deployed in the region.

Activists say the violence is an attempt by the authorities to create fear among protesters and quell the nationwide protests that have rocked the country for the past two months.

The rallies erupted following the September 16 death of Mahsa Amini, a 22-year-old Iranian Kurd who died shortly after she was arrested by Iran’s morality police for allegedly violating the country’s hijab law.

What began as protests against the brutal enforcement of the mandatory head scarf has snowballed into one of the biggest threats to Iran’s clerical establishment, which has ruled since the Islamic Revolution in 1979.

“The Islamic republic is using such intense violence in Kurdistan to silence the protests all over Iran,” Zhila Mostajar from Hengaw, a rights group registered in Norway that reports on Iran’s Kurdish region, told RFE/RL.

“The authorities think that by suppressing the protests in Kurdistan they will send a warning to people in other parts of the country,” added Mostajar, who is based in neighboring Iraq’s semiautonomous Kurdish region.

Hengaw said that at least 13 people have been killed in mainly Kurdish cities since November 20, including seven in Javanrud, four in Piranshahr, and one each in Dehgolan and Bukan.

At least 378 people, including 47 children, have been killed by government forces across the country, according to the Oslo-based Iran Human Rights (IHR). At least 83 people have been killed in Kurdistan, Kermanshah, and West Azerbaijan, three provinces with significant Kurdish populations, IHR said.

There were “intense confrontations” between protesters and security forces in Javanrud, a city in Kermanshah Province, according to Hengaw. Videos uploaded on social media on November 21 purportedly showed several wounded protesters lying on the streets amid the sound of heavy gunfire.

People also rallied in the streets of Kermanshah, the provincial capital, chanting “death to [Supreme Leader Ayatollah Ali] Khamenei,” according to a video posted by IHR.

IHR also shared footage that it said showed security forces using live gunfire against protesters in Piranshahr, a city in West Azerbaijan Province. Among those killed in the city on November 20 was a 16-year-old boy.

Fatemeh Karimi, the president of the France-based Kurdistan Human Rights Network, told RFE/RL that the Kurdistan region has turned into “a nightmare” for the authorities.

“People are paying a heavy price — the death toll is high, and many have been injured — yet they keep protesting,” she said.

The violence comes amid mounting fears about the situation in Mahabad, a city in West Azerbaijan Province where videos on social media appeared to show military forces and vehicles being deployed. Activists have claimed that the authorities were imposing martial law in the city.

Mostajar from Hengaw said security forces had “militarized” Mahabad for the past few days and directly shot at protesters.

Jalal Mahmudzadeh, a lawmaker from West Azerbaijan Province, said 11 people have been killed in the city since October 27, according to Iran’s Etemad daily.

He said five people were killed at the funeral of Esmail Moludi, who was shot dead on October 26 during a ceremony marking 40 days — the official end of the mourning period — since Amini’s death. The authorities said they are investigating his death.

“Some of these protesters have livelihood and economic problems and others feel discriminated against. But instead of listening to the protestors, the authorities use harsh methods,” he said.

The Islamic republic has long been accused of suppressing and discriminating against the country’s ethnic minorities, including Kurds, which make up about 10 percent of Iran’s 84-million population. Most Kurds in Iran, a predominately Shi’a country, are Sunni Muslims.

Prominent Sunni cleric Molavi Abdolhamid called on government forces on November 20 to refrain from shooting at protesters. He warned that repression will only deepen the dissatisfaction among people in the region.

Iranian authorities have accused “terrorist and separatist groups” and Iranian Kurdish opposition groups based in Iraq of stoking the unrest in the region. In response, Iranian forces have fired drones and missiles at the headquarters of Iranian groups based in northern Iraq.