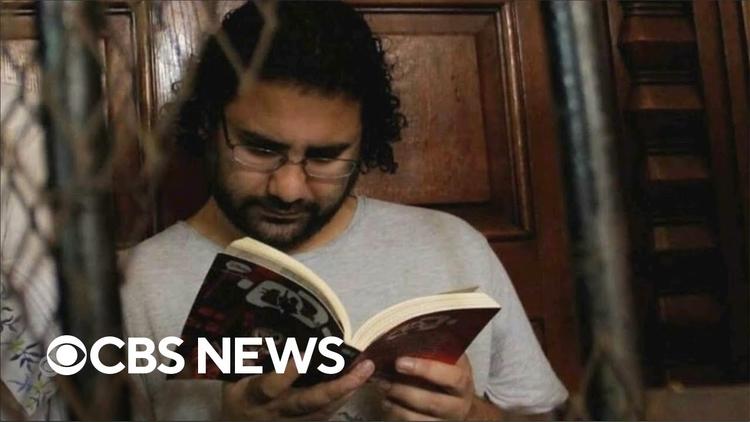 ( Middle East Monitor ) – Egyptian activist and blogger Alaa Abdelfattah wrote a book with the title You have not been defeated yet. He is being held in prison by the Egyptian regime for sharing a post on Facebook documenting the death of another political detainee in Egypt.

As I write, it is four days since Abdelfattah’s decision to stop drinking water in his hunger strike that has lasted more than 200 days. The decision was made just prior to the start of the COP27 climate summit in Sharm El Sheikh. He has decided to play his final card against the regime led by his near namesake Abdel Fattah Al-Sisi: his already feeble body. The hope is that he may attract the attention of someone within the regime who has respect for humanity, but it’s doubtful.

Hundreds of kilometres away from his prison cell, meanwhile, dozens of journalists representing the Western media assembled to cover a press conference in which a young Egyptian woman told them about her brother who is on hunger strike and refusing to take any food or drink. She demanded that the world leaders taking part in COP27 should put pressure on the Sisi regime to save her brother’s life. That young woman was Sanaa Abdelfattah, Alaa’s sister.

Sanaa and her sister Mona have led an international campaign for several months now in solidarity with their brother held in Egypt. The campaign included a protest lasting several days in front of the Foreign Office in London during which they talked to the British media about the dangers Abdelfattah is facing as a result of his hunger strike. His family met British Foreign Secretary James Cleverly just two days before the start of COP27, and they were given a letter from Prime Minister Rishi Sunak in which he affirmed is intention to raise the issue with Sisi for the immediate release of their brother.

His case has been highlighted right from the start of the summit. It’s a nightmare come true for the regime. Sisi has barely been able to meet a Western leader without being asked to release British activist Alaa Abdelfattah immediately. It happened in the Egyptian president’s meeting with Sunak, and again with French President Emmanuel Macron and German Chancellor Olaf Scholz. Egyptian Foreign Minister Sameh Shukri couldn’t evade the question when he was interviewed by CNBC correspondent Hadley Gamble. Then he was faced with the same question and the same demands from CNN presenter Becky Anderson.

In response, Sisi took the rather reckless step to try to defend himself. He deployed his media lackeys and instructed them to launch an attack on Alaa Abdelfattah to cast doubt on his hunger strike and claim, falsely, that he was a convicted criminal and that his imprisonment had nothing to do with the issue of freedom of expression. One of Sisi’s tame journalists is Ahmad Musa, who alleges that what the Western media are doing by highlighting the plight of Alaa Abdelfattah is a systematic campaign to tarnish Egypt’s reputation and attack the regime. Musa went further and described the demands by Sunak and the other leaders as “interference” in Egypt’s domestic affairs.

For those journalists covering the summit who don’t know Ahmad Musa, he is one of the closest associates of the Sisi regime and is known to be linked to the security agencies in Cairo. The man has been documented as having incited murder live on air. His daily programmes regularly include hate speech and accusations of treason and terrorism levelled at opponents of the Sisi regime.

Not content with the justifications for Abdelfattah’s predicament made by Musa and others on TV, members of the Egyptian parliament and the National Human Rights Council, as well as members of the National Women’s Council, have been ordered to attend the summit sessions on human rights and attack Alaa Abdelfattah and his family, and deny the existence of political detainees in Egypt.

The Egyptian regime wanted the climate summit to be a PR opportunity to greenwash its evil reputation and awful human rights record. It has been shocked to see it turn instead into a scandal, championed by Alaa Abdelfattah, casting its shadow on the much bigger issue of political detainees in Egypt. The country has 60,000 prisoners like Alaa Abdelfattah, many of them held since former defence minister Sisi launched his military coup in 2013.

The matter did not start with Abdelfattah and will not end with his release; he is neither the first nor the last. The regime is continuing with its repression and persecution of ordinary Egyptian citizens. The façade of a benign, open and transparent regime that respects human rights is belied by the fact that more than 200 Egyptian citizens have been arrested recently far from the eyes of the world focused on the political and media circus at Sharm El Sheikh.

The Egyptian regime may bow to external pressures and release Alaa Abdelfattah because he happens to have a British passport, but the matter cannot be allowed to end there. Releasing him must be the starting point for a campaign to pressure Sisi to release thousands of anonymous Egyptians who languish in his many brutal prisons for no other reason than that they oppose his rule.

If the world mobilises now for the sake of a British citizen called Alaa Abdelfattah, it should also exert pressure to save the lives of thousands of Egyptians who are not fortunate enough to hold the citizenship of another country. Alaa Abdelfattah and the 60,000 like him shout the same slogan: “You have not been defeated yet”. We cannot let them down.

Osama Gaweesh is Editor-in-Chief at Egypt Watch and a TV presenter at Al-Hiwar. He has previously worked for Journalism.co.uk