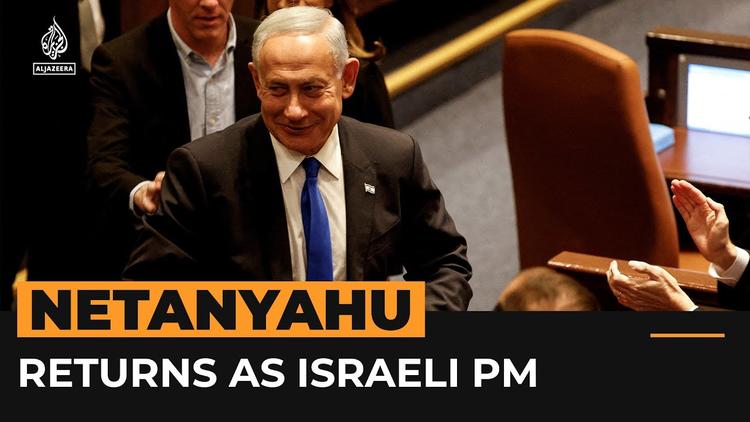 ( Commondreams.org ) – Global concerns about the new Israeli government—especially what it means for Palestinians—continued to grow Thursday as Benjamin Netanyahu took the oath of office to again serve as prime minister, this time leading the most far-right and religiously conservative coalition in the country’s history.

“The occupation and apartheid in the occupied Palestinian territories have made Jewish supremacy the de facto law of the land and the new government seeks to adopt this into their official policy,” groups warned.

The embattled leader was sworn in following a 63-54 vote of confidence in his new government by the Knesset, Israel’s parliament. He has appointed 30 ministers and three deputy ministers from his Likud party as well as Noam, Otzma Yehudit (“Jewish Power”‘), Religious Zionism, Shas, and United Torah Judaism.

“It is already clear that the emerging coalition will be disastrous for human rights between the Jordan River and the Mediterranean Sea.”

The coalition finalized Wednesday features “a mix of an ultra-Orthodox and right-wing bloc,” with some of the most “right-wing politicians we’ve seen,” Al Jazeera‘s Sara Khairat reported Thursday from West Jerusalem, as protesters gathered. “They were on the fringes of politics and now here they are on the main stage.”

Some ministry appointments were only possible because of a pair of laws passed by the Knesset on Tuesday—one enabling Aryeh Deri of Shas to serve as minister of the interior despite his recent tax fraud conviction and another allowing Religious Zionism’s Bezalel Smotrich to take on multiple posts.

“These laws… dovetail with Netanyahu’s own attempt to escape potential liability for his long-running corruption/bribery trial,” wroteMondoweiss‘ Jonathan Ofir. “If such exceptions can be made for Smotrich and Deri and cemented into law, this paves the way for the same being done for Netanyahu, when the need arises.”

Another controversial pick is Otzma Yehudit’s Itamar Ben-Gvir, the new national security minister, who in 2007 was convicted of incitement to racism against Arabs and supporting a terrorist organization. As Common Dreamsreported last week, the government reached a deal to lift the ban on parliamentary candidates who incite racism.

In a joint statement Thursday, several advocacy groups said that “it is already clear that the emerging coalition will be disastrous for human rights between the Jordan River and the Mediterranean Sea.”

“Previous Israeli governments have already entrenched military control over millions of Palestinians, severely harmed their human rights, and made the possibility of a just future more difficult,” they continued. “The senior figures in this new government have made it clear that they intend to exacerbate this trend and advance dangerous measures.”

The organizations—including Adalah, B’Tselem, Breaking the Silence, Peace Now, and Physicians for Human Rights Israel (PHRI)—warned that “the occupation and apartheid in the occupied Palestinian territories have made Jewish supremacy the de facto law of the land and the new government seeks to adopt this into their official policy.”

“As the mask slips away, we will continue to stand firm to protect the human rights of the most vulnerable population in the region,” the groups concluded. “We call on everyone for whom the future of this place is important to stand together with us.”

Warning of the coalition’s determination “to hurt the vulnerable, discriminate, and withhold medical care from migrants, Palestinians, and queer people,” PHRI declared in a series of tweets Thursday that “it’s time to resist.”

On the eve of his inauguration, Netanyahu had laid out the new government’s agenda—and made clear that expanding illegal settlements in occupied Palestinian territory is a top priority.

University of Michigan professor Juan Cole noted at his blog Informed Comment that a Jordanian newspaper called the exclusive Jewish right plank of Netanyahu’s platform “the execution of the Palestinian people.”

Cole added that “since Netanyahu has no intention of ever granting Israeli citizenship to the three million Palestinians living under Israeli military rule, the formal annexation of their territory would cement Israel’s apartheid system of racial difference,” a warning echoed by many other critics.

After Netanyahu tweeted the agenda’s lines about land rights in Hebrew, Palestinian-American writer Yousef Munayyer responded, “Say it in English so your apartheid apologist buddies over here can understand it.”

Munayyer also highlighted the silence of the United States government on the matter—while U.S. Ambassador to Israel Tom Nides congratulated Netanyahu and proclaimed, “Here’s to the rock solid U.S.-Israel relationship and unbreakable ties.”

In a Thursday statement, U.S. President Joe Biden said in part that “I look forward to working with Prime Minister Netanyahu, who has been my friend for decades, to jointly address the many challenges and opportunities facing Israel and the Middle East region.”

While Biden did not explicitly address any concerns about Israel’s new far-right government, he added that “as we have throughout my administration, the United States will continue to support the two-state solution and to oppose policies that endanger its viability or contradict our mutual interests and values.”

In a Twitter thread, Sina Toossi of the Center for International Policy noted that the U.S. government has long “turned a blind eye to human rights abuses committed by its allies” and asserted that “the new Netanyahu government in Israel will make the U.S. double standard on human rights even more blatant and egregious.”

Philip Weiss wrote Thursday for Mondoweiss that “the deafening silence” from some U.S. Zionist organizations shows they “are clearly upset” that Netanyahu ignored calls not to move foward with a coalition that “includes fascistic and racist/messianic convicted criminals, because it would damage U.S.-Jewish relations and provide ammunition to anti-Zionists.”

Weiss also highlighted that “the leading Jewish anti-Zionist group leaped on the new Israeli government today to catalyze Jewish support for democracy in Israel and Palestine.”

As he pointed out, Judith Butler of the U.S.-based Jewish Voice for Peace said that “the political conflicts at Jewish dinner tables across the diaspora are a sure sign that the consensus on the ‘democratic’ character of the state of Israel has broken apart.”

The new government in Israel has proved to be the most shamelessly racist in its history. Yes, but racism has been there from the beginning, a founding credo… Of course, it is good that we are shocked by Israeli racism, now increasingly shameless, for the world should not be this way. And yet, many of us are coming late to this sense of shock and outrage. It is time to act now, knowing that it has been time to act for a very long time!

The United Nations Office of the High Commissioner for Human Rights (OHCHR) announced earlier this month that “150 Palestinians have been killed in the occupied West Bank by Israeli forces so far this year, including 33 children,” the region’s highest death toll since the U.N. started keeping track in 2005.

Three U.N. special rapporteurs condemned the surging violence by Israeli forces and settlers, along with the unlawful occupation more broadly.

“Illegal settlement poses a corrosive threat to Israeli society as a whole,” they said, “and unless Israeli forces abandon this dominant settler mindset and rightfully treat Palestinians in the occupied territory as protected persons, Israel’s deplorable record in the occupied West Bank will likely deteriorate further in 2023.”

The experts added that “no peaceful settlement can be pursued under Israel’s repressive occupation: a reality that should be a wake-up call for all decision-makers.”