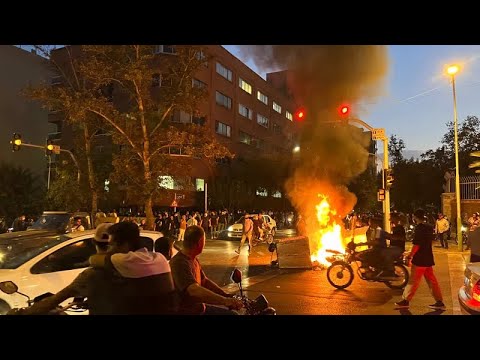 Oxford (Special to Informed Comment) – Various Iranian and foreign news agencies have reported that Iran’s Prosecutor General has announced the shutting down of the. Guidance Patrol (often referred to in the West as the morality police). In response to a question about the dismantling of the Guidance Patrol, Prosecutor General Mohammad Jafar Montazeri said: “The Guidance Patrol has nothing to do with the Judiciary. It was dismantled by the same organisation [presumably the Revolution Guards and the law-enforcement forces] that had established it.”

In another meeting held in Qom on the recent protests, he said: “The Majlis [the Parliament] and Supreme Islamic Revolution Council are studying and working on the issue of hijab, and the outcome of those decisions will be announced in 15 days. Such decisions should be based on wisdom.” He added: “After recent events, security and cultural organisations are trying to find a wise solution to this issue. The judiciary is busy working on a bill on the issue of morality and hijab.”

The reports regarding the dismantling of the Guidance Patrol have not been confirmed or denied by other government officials, and it is not clear whether the Prosecutor General was speaking in his personal capacity or whether his remarks reflect the official position of the government, or at least of the judiciary, or whether they are in the form of trial balloons in order to gauge public reaction. There are conflicting reports, with one statement from Iranian state TV denying that the morality police will be abolished.

However, there is plenty of evidence to show that the Iranian regime has been rattled by the protests and is trying to find a way out of the biggest domestic crisis it has faced since the establishment of the Islamic Republic. Earlier this month, Ali Reza Hosseini-Beheshti, the son of the late Ayatollah Mohammad Beheshti, the first head of the Islamic Judiciary, a member of the shadowy Islamic Revolution Council and one of the main architects of the Islamic Republic’s first constitution, called for the election of a Constituent Assembly to write a new constitution. He said that the regime has no other alternative: “The system has only two options. If it wants Iran to survive, it has no choice but to give in to this solution, or else it should openly admit that it attaches no importance to Iran.”

The Iranian Students News Agency, ISNA, has reported that Azar Mansouri, the secretary general of a leading reformist party, accompanied by “a number of political activists” met with the powerful Secretary of the Supreme National Security Council, Ali Shamkhani, on December 4 and offered some proposals to him about how the government should react to the protests. She said: “The ruling establishment must talk to the people, accept its mistakes, and control the microphones that spread hatred and anger the people.” She also called on the government to lift the restrictions on social media, allow peaceful gatherings, free political prisoners and rescind the death sentences. She went on to say that “in order to improve the economic situation, the government must resolve its differences and challenges with America and the West, and must reform its policies in order to make the best use of the capabilities of Iranian expatriates.”

The current nationwide protests started following the tragic death of 22-year-old Mahsa Amini in the custody of the Guidance Patrol on 16 September 2022, and they show no sign of abating. Meanwhile, strikes by many labor unions, such as truck drivers, teachers, university lecturers, oil industry workers and even some conservative merchants in the Tehran bazaar in support of the protestors have continued and are even intensifying.

The regime’s brutal crackdown of the protests has had the opposite effect and has intensified the scope and severity of the protests, despite many casualties. Iran’s Security Council (headed by the Interior Minister Hassan Habibi) has admitted that at least 200 people have died, while IRGC Aerospace head Amir Ali Hajizadeh says that “at least 300 people have been killed or martyred in recent weeks.”

Iran’s deputy foreign minister Ali Bagheri-Kani has claimed that more than 50 law-enforcement personel have also been killed by protestors. Opposition sources put the number of the dead as over 440, with more than 18,000 protestors being arrested and some of them sentenced to death.

It is clear that the women’s uprising in Iran, supported by many men and by remarkable international solidarity, has reached a critical point and, for the first time, it is possible to realistically imagine the end of the clerical regime. Deep cracks have appeared among the leading members of the regime and even of the security forces, and doing nothing and hoping that everything will go back to square one is not an option. The movement is irreversible, and if the reports about the dismantlement of the Guidance Patrol are confirmed, it shows that the women’s revolution has achieved its first tangible gains. However, what is on offer is too little too late. The main question is which direction the events will take from now on.

Although many opposition groups abroad have jumped on the bandwagon and are calling on the people sacrificing everything inside the country to intensify their activities and prepare the way for one such group to return to the country among universal acclaim, the fact remains that the real change will take place inside Iran and not from outside.

A major problem of the revolutionaries under the Shah was that they only wanted to get rid of him, without any plans for an alternative. During the last days of the former regime, I asked a university friend of mine who was very active in the protests what his ideal future regime was. I asked him if he had even read Ayatollah Ruhollah Khomeini’s books and whether he agreed with his views. He answered that even asking such a question was treason to the revolution. The only aim was to get rid of the Shah because, according to him, what replaced him could not be any worse. Of course, given the brutal record of the clerical regime, one can hold that view with more justification about this regime, but this is a very risky course to follow.

With its long history, a constitutional revolution nearly 120 years ago, a well-educated and pro-Western population, Iran is perhaps the only country in the Middle East which is totally ready for democracy. The imposed fanatical Islamist regime and people’s long struggle against it has given Iranians a unique experience and a thirst for freedom, as demonstrated in their slogan of “Women, Life, Freedom”.

It is important to avoid the fate of some failed states in the Middle East, such as Iraq, Afghanistan, Syria, Libya, Somalia or Yemen where some US Neoconservatives were trying to establish democracy.
This is why it is important to at least think about the possible alternatives to the current regime. Possible scenarios may include:

1- The slow-motion collapse of the Islamic regime and the triumph of the protestors without much resistance by the regime’s military and security forces. This option is very unlikely, given the fanatical attachment or subservience of some military forces, especially the IRGC and the Basij militia, to the regime. It is possible that if the regime faces serious threats to its existence those forces will unleash a reign of terror worse that we have ever seen.

2- A foreign military attack on Iran’s nuclear facilities in the hope of weakening the regime and strengthening the protestors. This option too is very unwise and may in fact strengthen the regime, as was the case with the Iran-Iraq war. Most Iranians may detest the regime but they love their country. Nothing will unite them more than a foreign threat or a foreign attack on their country.

3- The possibility of a military coup either by the regular Army or more likely some elements within the IRGC. Far from establishing freedom and democracy in Iran, this option will entrench the violent sections of the regime and will produce a military dictatorship as we have seen in Egypt or Syria. Given the state of chaos in the Middle East and the world, especially after the Russian invasion of Ukraine, any new military action in the Middle East would be catastrophic and would be the last straw to break the back of the global economy.

4- There is some wishful thinking in the West that a different government in Iran would be less nationalistic or assertive than the current regime and would be friendlier towards the West and Israel. Given the extreme hostility of the Neocons towards Iran and the experience of crippling sanctions and maximum pressure imposed by President Trump, and the Israeli record of assassinating many Iranian scientists, it is highly unlikely that any new regime imposed from outside would want or be able to establish closer relations with the West or Israel.

However, this does not mean that there cannot be a constructive path to regime change in Iran. With an ailing leader, widespread protests and even a profound feeling of disappointment and disillusionment among many members of the regime, there is the possibility of evolutionary, rather than revolutionary or violent change. The major fear of many government officials and security forces is either the disintegration of the country or the possibility of severe reprisals by a new government. This anxiety is not helped by the constant threats issued by some opposition groups, especially those in exile.

We have had the experience of a remarkable peaceful transfer of power in South Africa from an apartheid regime to majority rule. Perhaps the most important factor in the success of that revolution was its promise of peaceful change. Iran needs to follow the path of a Truth and Reconciliation Commission, promising a general amnesty, combined with the rule of law and the punishment of those who have committed major crimes. A majority of Iranians participated in the Islamic Revolution and it was not imposed from outside. Most people share in the guilt, although the crimes of those who used the revolution for their own personal gain and who introduced a reign of terror cannot be forgotten or forgiven.

While a violent change in Iran can destabilize the country and even lead to its disintegration, helped by some malign foreign elements, a peaceful and orderly transition can save the country and even serve as a model for others in the Middle East to follow. On the other hand, the collapse or disintegration of Iran will have profound repercussions for the region and will destabilize the entire Middle East and the rest of the world.
Of course, it is not for any of us from outside to tell Iranians which path to follow, but at least we can make suggestions and warn of possible pitfalls. The current nationwide protests give one hope that Iranians will choose the option which is more in keeping with their experiences and traditions and to the greater interest of the country. Long-suffering Iranians deserve this.