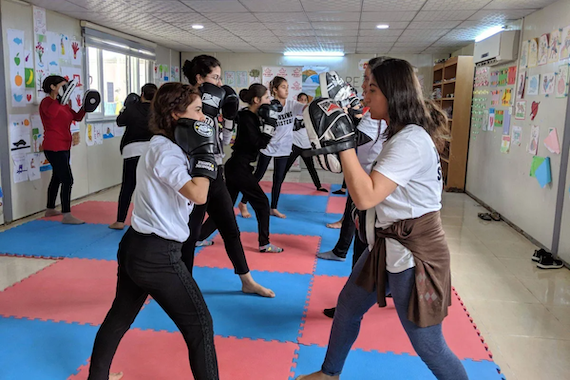 ( Middle East Monitor) – After the 2014 Daesh genocide which left them reeling from the effects of mass abduction and rape, Yazidi refugee girls are rebuilding their lives with the help of boxing, art and music classes. Emma Loffhagen and Charline Bou Mansour report from Iraqi Kurdistan

In a small, dimly-lit cabin in Kurdistan, northern Iraq, 15-year-old Zhiyan Yousif takes a moment to bend over and catch her breath. After a few seconds, she is upright again, a determined look back on her face. She is here, on a warm November morning in Essyan refugee camp, to fight.

Ten or so other girls form an orderly queue behind her, chatting excitedly. They take in turns to duck and weave, dancing around one another to the steady rhythm of their boxing instructor’s shouts of “jab!”, “cross!”.

Like all the girls in the boxing class, Zhiyan is a Yazidi refugee, and has lived in Essyan camp, on the outskirts of the dusty hills of Duhok, for eight years. She was just six years old when Daesh swarmed her hometown of Sinjar, northern Iraq, in the middle of the night in August 2014. She was forced to leave everything behind and flee, along with an estimated 200,000 other members of the Yazidi religious minority.

Like tens of thousands of Yazidis, Zhiyan took refuge on Mount Sinjar with her parents and ten siblings, surviving for seven days without food or water in the searing August heat. Temperatures reached 40C, and many died of dehydration and exhaustion. That was the last time Zhiyan would ever see the place she still calls home.

“I would love to go back one day,” she tells me. “But it’s unsafe. For now, I will just live here in the camp. But Sinjar is still the place that I call home.”

It is here in the camp that Zhiyan has found her passion. In 2018, when a ground-breaking programme called Boxing Sisters was set up to help women and girls recover and rebuild from the trauma of Daesh brutality, she was one of the first to sign up.

“When I first started boxing I found it really difficult,” Zhiyan tells me, sitting in a small library established by the Lotus Flower, a charity that provides holistic education classes to women and girls uprooted by conflict. “But step by step it became easier. It has really helped to change my mindset and my physical health. Now I can’t miss a class.”

When Daesh overran Sinjar, their fighters carried out a pre-planned mass abduction of girls for the purpose of institutionalised rape. Initially, they were looking for unmarried women and girls over eight. More than 6,000 Yazidi women and girls were enslaved and transported to Daesh prisons, where they were sold as sex slaves, raped, tortured and killed.

While not all of the thousands of girls in the displacement camps in the Kurdistan region of Iraq were kidnapped or subjected to sexual violence, all of them, like Zhiyan, had to flee for their lives.

A 40-minute drive from the city of Duhok, Essyan camp is one of 21 camps for internally displaced people in Iraqi Kurdistan. Home to around 13,000 refugees, almost all of them Yazidi, it resembles a small village, with a school, hairdressers and shops selling clothes and gadgets. But even after eight years, most families still sleep in makeshift tents. Sheep and goats roam free, often followed by a giggling toddler hot on their heels.

The Lotus Flower centre is a short drive through the camp. Like its namesake, a flower that grows from the mud, the centre feels like an oasis, with classrooms in cabins centred around a brightly coloured “art garden” painted by the participants.

Forced to drop out of the small school in the camp because of difficulties in her family life, Zhiyan, whose name means ‘life’ in Kurdish, has turned to the boxing classes at the Lotus Flower as her escape, and potentially her ticket out of Essyan.

“I love sport and it has made me realise that when I’m older, I want to be a professional boxer or maybe a volleyball player.”

Her boxing coach Nathifa, herself a Yazidi refugee, has fought hard to overcome the stigma around women doing an activity like boxing within the conservative community. “I went to each of their houses and I asked their fathers: ‘why aren’t you letting your girls come to the class?'” They responded: ‘girls have nothing to do with boxing.'”

“So I said, I want to let you know that if your girls knew how to defend themselves, one Daesh fighter might not have been able to capture 10 girls at the same time.”

“I’ve noticed that during the classes some of the girls will cry,” says Nathifa, who speaks with passion about the cathartic importance of this training for her now 40 regular students. “It’s not just a sport for them, it’s a way for them to release the stress and anger of what they’ve been through.”

For women and girls who have all been through unimaginable trauma, some being captured and tortured by Daesh, it is also about being able to defend themselves in a region where remnant Daesh militants still pose a threat.

“It’s so important that the girls are not afraid, that they know how to protect themselves without anyone else needing to save them.”

For 17-year-old Parwin, the memories of the day Daesh fighters turned up at her door eight years ago are still vivid.

“I saw them with my own eyes,” she says. “They were big and scary, they had beards, long hair and black clothes. The first time we saw them, we all cried.”

Both of Parwin’s parents were killed in a blast when she was two years old. Since 2014, she has been living in the camp with her aunt, uncle and cousins, and comes to the Lotus Flower centre every day to take part in the art, yoga, music and English lessons that the charity also runs.

“I used to feel like a mental health patient. I would scream and cry for my mum and dad – I saw them everywhere. I screamed so loud the entire camp would hear me.”

When she first sits down to speak to us at the Lotus Flower’s centre, Parwin is shy, fidgeting and shifting in her seat. She is holding a notebook where she has written down what she wants to say in case she forgets.

“Before [the Lotus Flower] there were no classes and activities like these. We were always so scared and would never leave our tents. I’m at ease here. If my head hurts or I feel tired, I come here and my mood just changes.”

With education comes empowerment. Many of the women living in the camps have seen the men in their family killed by Daesh and become the sole providers for their extended families overnight. As well as running classes, the charity helps these women to set up their own small businesses within the camps.

“Education means everything to me,” Parwin says. “I used to sell potatoes and onions to make money, and I’d have to borrow money from my friends to pay for school books and papers. Here it’s constantly noisy, it’s not a good environment to study in, so I’d get up at 3 am in the middle of the night to study until midday.”

“I study so hard every day. But as soon as I enter the class and start my exam, I panic and forget everything because of the anxiety and depression I deal with.”

Literacy rates among Yazidis, particularly women and girls, are typically low. The community has historically treated formal education with suspicion, associating it with repressive state authorities and the suppression of their language.

When Daesh arrived, illiteracy made it harder for captured Yazidi women to escape because they couldn’t read road signs or the names of unfamiliar buildings.

“We believe in a very holistic approach to education, given everyone in the camp has different needs and different ways of channelling their emotions,” says Taban Shoresh, the London-based founder of the Lotus Flower and herself a child genocide survivor of Saddam Hussein’s regime. When Shoresh saw another genocide being perpetrated in Iraq, she left her City job to establish the charity.

“Mental health and wellbeing are tied to flourishing in education and business – I don’t believe you can have one without the other.”

“For people suffering from horrific traumatic memories, they need to have a sense of how they are going to rebuild their lives,” says Dr Michael Duffy, an expert on the psychological impact of trauma at Queen’s University Belfast.

“There need to be mechanisms in place to facilitate this, like education, art, yoga, music – all of these services…are hugely important supplementary interventions.”

We follow Parwin up the dusty path leading to her home in Essyan camp. Cushions line the floor of a small room that she shares with her cousins. The facilities are basic – a cupboard serves as a kitchen, and a cracked piece of glass hangs on the wall as a mirror. In summer, temperatures in Iraq can reach 50C, and the heat in the tents is unbearable.

There is often a misconception of refugee camps as sites of emergency and temporary aid relief. But this has been life for the 360,000 displaced Yazidis for the last eight years, and returning to Sinjar in the foreseeable future is still unlikely.

“The work these charities do is wonderful and must be commended, but this is a huge problem that requires an international, intergovernmental response,” Dr Duffy says. “We can try to help someone move on from a traumatic experience, but in this case the question is: where are they moving on to?”

For Parwin, there has always been one answer to this question. When we ask her what she wants to do when she is older, her eyes light up.

“My dream is to become a lawyer,” she says proudly. “And God willing, I will be one.”

This article is part of the Let Girls Learn series from the Evening Standard in London.