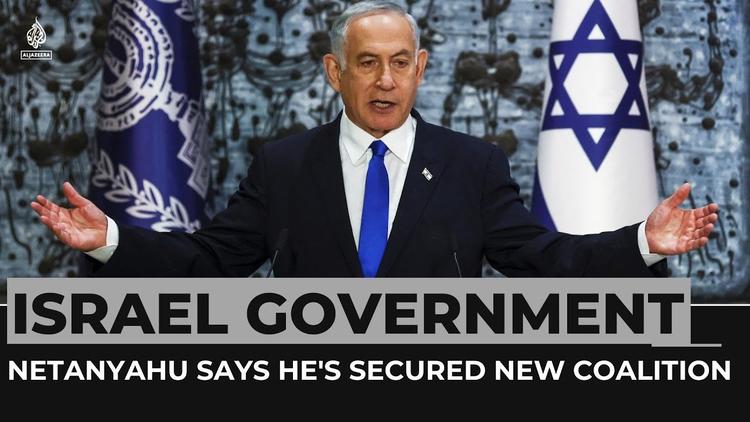 However, what Mr. Friedman and other commentators fail to realize is that Israel has an obvious two-state (“strong-Israeli-state, marginal-Palestinian-state”) solution it can implement when necessary.
When Israel’s illegal settlement actions approach the ultimate political threat of a single Palestinian-majority state encompassing Israel and the occupied territories, Israel can simply implement a self-serving, unilateral withdrawal from areas of the West Bank that are overwhelmingly dominated by Palestinians. Once accomplished, Israel will easily gain the support of the only country that matters, the United States.
Article continues after bonus IC video
A Jazeera English: “Israel’s Netanyahu says deal agreed with far-right to form gov’t”
The resulting Palestinian “state” will be like many countries in the world: poor, authoritarian, and ignored.
Let’s remember that in 2005, as 8,000 Jewish settlers lived in Gaza — 0.6 percent of the Strip’s population — even Prime Minister Ariel Sharon recognized the demographic, security and public relations costs. Accordingly, he ordered the withdrawal of settlers and soldiers and paid little domestic or international costs.

That Israel still legally occupies Gaza hardly matters. And, the expected, low Jewish casualties from ongoing Gazan resistance have been easily handled and serve to reinforce Israel’s indoctrination of its Jewish population.