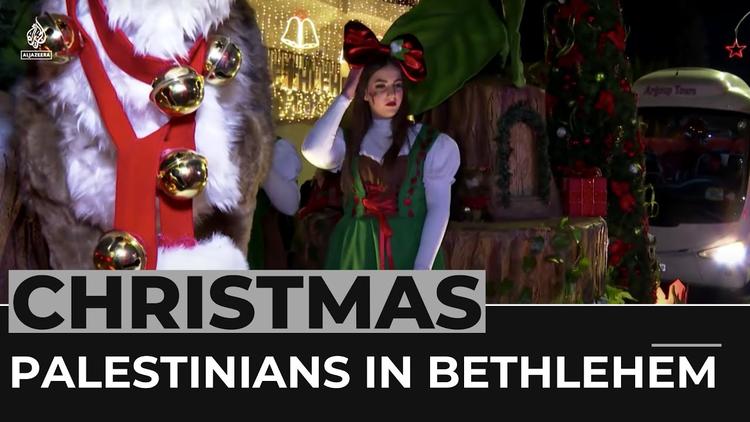 Ann Arbor (Informed Comment) – PNN reports on a statement of the mayor of Bethlehem in the Palestinian West Bank, which has been miitarily occupied by Israel since 1967. It writes,

The Mayor of Bethlehem, Hanna Hanania, said that this year’s holiday message was titled “Christmas brings us together”, that is, it unites us on goodness, love and giving, and it is a message to the international community of the need to stand up to its responsibilities and to stop Israeli practices.

I don’t know about you, but the ending of that sentence brought me up short. Christmas brings us together: check. Christmas unites us in goodness, love and giving: Check.

But, Christmas is a wake-up call to the international community to intervene to stop Israeli occupation practices toward the oppressed Palestinians?

This last point makes sense only if you know that according to a 2020 poll 80% of Palestinian Christians worry about being attacked by militant Israeli squatters, that 83% worry that these colonizers will drive them from their homes, and 70% are concerned that the Israeli government will simply annex their land. Fully 62% of Palestinian Christians believe that the ultimate goal of the Israeli government is to expel Christians from their homeland.

A good 14% have actually lost land to the Israelis, and 42% have to regularly go through Israeli security checkpoints, which have carved the West Bank up into cantons and make it difficult to get to hospital.

Christmas is back this year in Bethlehem, a town of 25,000 or so, where about 11,000 are Christian and the rest Muslim, after two years during which tourism evaporated in the face of the COVID-19 pandemic. The municipality lit up the Christmas tree and held a Christmas market, and the tourists came flooding back in. The mayor cautioned, however, that it would take the local inhabitants time to recover from the deep economic recession caused by the pandemic. He thanked the Palestinian ministry of tourism and antiquities for its help in recovering some of the glitter of the holidays.

The West Bank, however, is a tinderbox, especially with the prospect of new government led by Likud, Jewish fundamentalists and hard line anti-Palestinian expulsionists. That shadow falls on Bethlehem, too, which has been boxed in by Israel’s Apartheid Wall, built on private land of Palestinians and cutting the town off from Jerusalem. The mayor, a Christian, explained that he was referring to deliberate Israeli practices and intentional escalation around Christmas time, involving major incursions by Israeli forces into the city and its refugee camps (such as Dheisha, which houses Palestinians expelled from their homes in what is now Israel in 1948). He said that Israeli forces had made arrests and had tightened what amounts to a siege on the town. He pledged that despite this harassment, Christmas celebrations would go forward as planned.

In this part of the world, holy days are political. Palestinian rights activist Mustafa al-Barghouti said that all Palestinians are devoted to celebrating the birth of Jesus Christ in the face of the new “fascist” Israeli government, adding that the Palestinians see Christ as “the first Palestinian who was tortured in this land and who triumphed over his torments.” He said that the message of the Palestinian people on Christmas is that they will triumph, as well, over their own torments, “over fascism and criminality.” He sees Palestinian participation in Christmas festivities in Bethlehem as “a form of resistance” to the Israeli occupation.

Jesus was crucified by imperial Roman authorities in the province of Palaestina on suspicion of sedition, which makes him a sympathetic figure to contemporary Palestinian Christians and Muslims (Muslims believe in Jesus as one of God’s prophets).

The paragraph I wrote over a decade ago still holds true:

““Most Americans when polled are not able to say where exactly Bethlehem is or who lives there. Only 1 in 6 know that it is a Palestinian city of 30,000 in the West Bank with a mixed Christian (40%) and Muslim (60%) population. Almost no one in the US knows that the Israeli wall or separation barrier, which has ghettoized many Palestinians and expropriated from them property and farm land, is strangling Bethlehem. The barrier cuts Bethlehem off from Jerusalem and steals private property from its residents. It has created an economic crisis that has caused Palestinian Christians to emigrate from the city. The “Christians of Bethlehem overwhelmingly (78%) blame the exodus of Christians from the town on Israel’s blockade . . .”

Jason Casper at Christianity Today did a deep dive on the Christian Palestinians of the Occupied West Bank. He cites a poll from a couple of years ago that showed that where Palestinians want to emigrate to Europe or the Americas, it is overwhelmingly because of straitened economic circumstances. The economic problems in the area, in turn, stem from Israel’s occupation.

The United Nations Conference on Trade and Development (UNCTAD) estimates that since the year 2000 the Israeli Occupation has cost the Palestinian economy $58 billion.

Palestinian Christians for the most part don’t leave their homeland because of religious persecution or fear of their Muslim compatriots. Only about a third of them consider themselves religious, and they are the least likely to emigrate. Palestinian Christians find it easier to go to Europe and the Americas than do the Muslims, but even so most say they are committed to staying with their family and friends in the place they love.