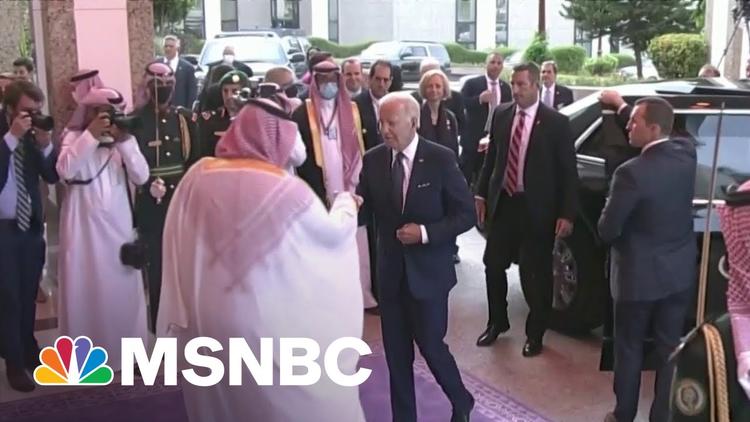 Ann Arbor (Informed Comment) – We saw a lot of pivotal developments in the Middle East this year, including the impact of climate change in the form of increasing aridity and massive dust storms. But there were also realignments of interests that affect the U.S. Here are some of them:

1. President Biden in July made a trip to Saudi Arabia where he began trying to repair relations with Riyadh after having vowed to make the country a “pariah” over the assassination of Washington Post columnist Jamal Khashoggi in October 2018. He fist-bumped with Crown Prince Mohammed Bin Salman, the power behind the throne, seeking help with reducing the high price of gasoline. Bin Salman pocketed the fist bump and then went on to vote for reducing OPEC oil production by 2 million barrels this fall. That move sent gasoline prices higher just before the midterms, and looked like an insult to Biden. Since the Democrats passed the Inflation Reduction Act and are attempting to have transportation get quickly off of petroleum, the US and Saudi Arabia no longer have the same interests, and it is natural that they should begin drifting apart. While, because of the Ukraine War and the consequent energy crisis, the Saudis have the upper hand this year, over the next decade their significance will dwindle. Already, 18% of new car registrations in California are electric vehicles, giving Saudi Arabia a clear message to drop dead. Biden’s current message, that they should drop dead but wait 10 or 15 years until EVs dominate, isn’t much better. A partnership established in 1945 between Ibn Saud and FDR may be gradually falling apart.

2. Iran saw the remarkable outbreak of nationwide demonstrations after a Kurdish-Iranian young woman, Mahsa “Zhina” Amini, died in the custody of the morals police in mid-September after having been arrested for being insufficiently modest in her appearance. The demonstrations have been led by young women, which is unprecedented, and have demanded not only more personal freedoms but also better pay for workers. Although many demonstrations were in universities, on some occasions shopkeepers have closed up in support of the rallies, and some labor unions, including those of teachers and the oil workers, have shown support. The movement may not be able to change Iran’s government on a short timeline, but it seems likely to change Iranian society in the long run.

3. We saw the now-annual conflict during the fasting month of Ramadan last spring between Palestinians seeking to worship at al-Aqsa mosque and Israeli forces determined to make that difficult. But the most consequential violence was directed by an Israeli sniper against Shireen Abu Akleh, the veteran Al Jazeera correspondent whose team was attempting to cover an Israeli military operation against Palestinian militants in the Jenin refugee camp, on May 12. The sniper took down Shireen with a bullet just below her helmet, even though she was wearing a big sign saying “press.” The Israeli government initially attempted to cover up the assassination, claiming that she got caught in Palestinian cross-fire. When that story fell apart, the Bennett government tried to pass the incident off as an unfortunate accident. But it wasn’t, and even CNN concluded that Israeli military personnel targeted her for killing. The FBI is now finally investigating (Abu Akleh was an American citizen). With the new, extremist government in Israel, we should brace ourselves for more such assassinations, which are applauded by groups such as Jewish Power and Religious Zionism..

4. The fall in June of the eight-party unwieldy government of Naftali Bennett and the return to power of Binyamin Netanyahu. Bennett’s government fell over the need to renew a law giving Israeli squatters in the Palestinian West Bank all the rights of Israeli citizens living inside Israel. Bennett’s narrow majority depended on Palestinian-Israeli members of Knesset, the parliament, and enough of them refused to renew what has been called the “Apartheid law” that it looked set to lapse. The only way it could remain in place without being formally renewed in the Knesset was for the government to fall, in which case its renewal would be automatic. Bennett’s was the first Israeli government to include representatives from the 21% of the population that is of Palestinian heritage. The experiment demonstrated that a fully democratic Israeli government could not long remain in power because the Palestinian-Israelis are not OK with the attempt of Israeli citizens to colonize the Palestinian West Bank, which is illegal in international law. The fiasco laid the foundation for the return to power this winter of Likud Party leader Binyamin Netanyahu, who, however, could only cobble together a parliamentary majority by allying with the fascist wing of contemporary Zionism. This move is ironic because the Likud Party itself has roots in far right-wing Zionism, but of a largely secular sort. The Religious Zionism and Jewish Power movements with which Netanyahu has made his new government speak openly about ethnically cleansing the Palestinians, and want to remove any rules of engagement for Occupation troops, such that they can kill Palestinians, including minors, with impunity. One of the ministers in Netanyahu’s government has just said that conservative Jewish physicians in Israel should not be forced to treat gays. So both Palestinian and Israeli national identities are changing and becoming stronger, which does not promise harmony.

5. Iran emerged as a major military partner of the Russian Federation, supplying devastating drones to President Vladimir Putin as the Russians began running out of munitions. Iran’s intervention may have prevented a rout of Russian troops, as Ukrainian forces took back territory that Russia had first conquered when it invaded in February and March. Russia and China appear pledged to attempt to offset the economic and financial blockade that Washington has deployed against Iran. There are now allegations that Iran will buy two dozen Sukhoi Su-35 fighter jets from Moscow, a game changer, since US sanctions had devastated the Iranian air force. The emerging Moscow-Tehran alliance, even though it is based on nothing more than pragmatic self-interest, is a major realignment of the geopolitics of the Middle East. Saudi Arabia and Israel are both extremely wary of this development.

6. The complete bankruptcy of the U.S. reshaping of Iraq from 2003 was demonstrated when the 2021 elections resulted in a hung parliament in which no major political bloc got a majority and no three such blocs could agree to form a government with one another. The leader with the most seats in parliament, quirky cleric Muqtada al-Sadr, grew so frustrated that he asked all his members of parliament to resign. They did so, and the other parties reapportioned their seats among themselves, then promptly elected a pro-Iran prime minister, Muhammad Shia al-Sudani, who is beholden to the Shiite militia-parties that are funded and trained by the Iranian Revolutionary Guards Corps.

7. Tunisia’s decade-long democratic experiment completely unraveled, as President Qais Saied gutted the constitution and gathered all power in his hands, just as had his predecessors among the country’s “presidents for life.” Saied has made himself so hated that when he held parliamentary elections this fall, only 9% of the eligible voters showed up. If they know they’re again living in a seedy police state, why bother with a sham election? It remains to be seen whether Saied will be weakened by the “quiet quitting” of the electorate.

8. The Taliban continued their fundamentalist clampdown on Afghanistan, just recently expelling women from the universities. Apparently their male egos are threatened by women who, like, read. They also decreed that women could not work with foreign NGOs, at which Save the Children and a few other charities still operating there packed up and left. People in the Afghan countryside say they are happy no longer to be bombed in US air raids, but the country has become more and more isolated and poverty-stricken. The U.S. no longer has much leverage there, but conflicts are emerging between Kabul and Islamabad, and the Taliban cannot necessarily count on Pakistani support going forward.