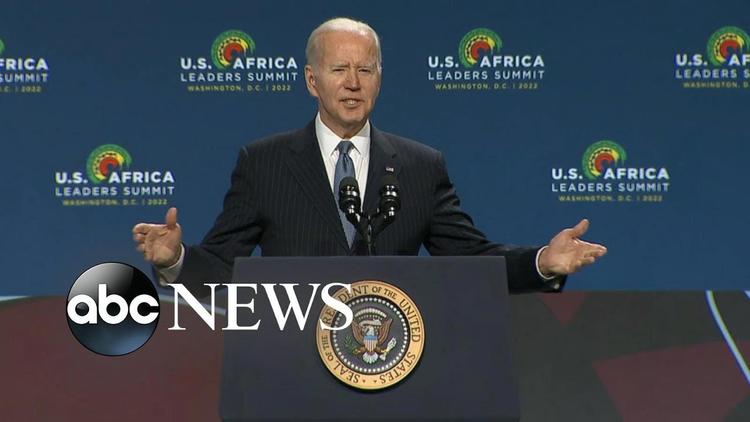 Ann Arbor (Informed Comment) – President Biden is hosting a 3-day summit with leaders of 49 African countries plus the head of the African Union Commission, and Wednesday was the second day of meetings. The African continent is just enormous. European and North American mapmakers typically use a projection that enlarges the northern hemisphere (giving us a gargantuan Greenland that looks far bigger than it is) and shrinks the southern hemisphere. But you could tuck the entire United States into one corner of Africa.

The leaders of four countries were snubbed because they have been suspended by the Africa Union for having governments that came to power through a coup, such as Burkina Faso and Mali.

Africa is populous, with 1.4 billion people, about four times bigger than the U.S. It may quadruple in population over the next century, as China, Japan, and Germany age. It is a young continent — 60% of the population is under 30. They are likely to be the dynamic part of the world in the coming decades, and yet American foreign policy and corporations have paid relatively little attention to the continent. As Joyce M. Davis points out at CNN, China’s trade with Africa comes to $254 bn. last year, while US-Africa trade was only $64 bn. The African market is valued at $3.4 trillion, so it is nothing to be ignored.

Biden touted billions in U.S. aid and investment for Africa in coming years.

Although the summit clearly is aiming to make America more competitive in African with China, President Biden did not bring up that dimension of the issue in his speeches.

Article continues after bonus IC video
ABC News: “‘US is all in on Africa’s future,’ Biden says”

Africa leaders don’t want just to be a market for U.S. goods, however, Reuters quotes Kenyan President William Ruto as saying, “Instead of exporting commodities, the U.S. should find an opportunity in investing.” He added, “They have the machinery, they have the know-how, so that they can produce for the African continent in Africa.”

Growing up, I remember the US having NATO summits with European allies, and summits with Latin America, but never with African nations. President Barack Obama held the first such summit in 2014, but then in 2017 somehow for some strange reason Africa fell off the map as far as the White House was concerned. What could it have been . . ? Hmm.

The African Union has designated the African diaspora as its sixth region, and on Day 1 the Biden administration had a session, Africa and Diaspora Young Leaders’ Forum, which took online questions, according to Robert Scott, of the State Department Bureau of African Affairs. The Forum was addressed by Vice President Kamala Harris, who is of African heritage on her father’s side.

The second day of the conference was dedicated to strengthening trade and business relations between the U.s. and Africa. The State Department said, “The second day focused on increasing two-way trade and investment at the U.S.-Africa Business Forum (USABF). CEOs and private sector leadership from over 300 American and African companies convened with the Heads of Delegation to catalyze investment in critical sectors, including health, infrastructure, energy, agribusiness, and digital.”

Day 1 had covered cooperation on health, climate change and a just energy transition, creative industries, and security, among other topics.

Since the Biden administration included Arabic-speaking North Africa in the summit, I was interested to see what, e.g., the Egyptian press was saying.

Adham Mohmed at Tabi` Misr quoted Africa expert Ramy Zuhdi to the effect that Africa has now emerged as a central issue in global diplomacy, and its leaders enter this summit in a more powerful position than ever before. He also underlined that Africa wants things from the U.S., especially help in confronting the effects of climate change and of the Ukraine War, which has caused high energy and food prices.

The same reporter at the same newspaper also covered some details of what Biden is offering Africa.

These include $370 million for new projects, of which $100 million would be dedicated to agricultural projects.

Another $350 million will go, Mohmed said, to developing Africa’s digital economy. And a billion dollars, he said, would be made available for improving cyber-security.