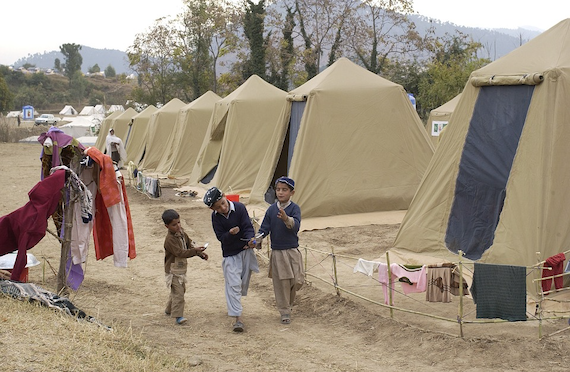 ( Foreign Policy in Focus ) – This year had the unwelcome distinction of being the first to see over 100 million people displaced worldwide. Such a staggering milestone reminds us that greater efforts are needed to address the underlying causes forcing so many innocent people to flee their homes.

Even more alarming, this milestone was reached by the middle of the year. Over 50 million people were internally displaced within their own countries, over 30 million were refugees forced to flee their countries, and some 4.3 million were stateless.

More than 70 percent of all refugees came from five countries mired in violent conflict: Syria, Venezuela, Ukraine, Afghanistan, and South Sudan. Climate-related emergencies, meanwhile — including severe floods in Pakistan and drought in Somalia — contributed heavily to the growing number of people internally displaced.

Many countries have welcomed refugees this year, despite seismic challenges and limited resources. In the first five months of the Ukraine war, the United States admitted more than 100,000 Ukrainians, while other communities around the world have welcomed millions more.

Such compassion in the face of enduring struggles is encouraging — and should extend to all crises. Refugees have also remained resilient while confronting these obstacles, which speaks to their inspiring grit and bravery that rarely makes the news.

But far too often, states adopt double standards in their treatment of refugees and asylum seekers.

This is especially true for Haitians, who have long encountered discriminatory U.S. immigration policies and abuse — exemplified by images of U.S. Border Patrol agents on horseback whipping desperate Haitian asylum seekers in Del Rio, Texas last year. Between October 2018 and June 2021, the U.S. denied asylum to Haitians more than any other nationality.

After decades of political and economic turmoil, living conditions in Haiti deteriorated this year due to gang violence following the 2021 assassination of then-President Jovenal Moïse. Nearly half the country faces acute hunger. A lack of safe drinking water and basic sanitation have also led to a rapid reemergence of cholera.

As a result, many Haitians have had to flee their country, which prompted the UN High Commissioner for Refugees Filippo Grandi to call on all countries “to stand in solidarity with Haiti” and “not to return Haitians to a country that is extremely fragile.”

Unfortunately, the U.S. accelerated the mass expulsion of more than 25,000 Haitians between September 2021 and May 2022. They were returned to Haiti where they face likely harm and humanitarian disaster.

Most of the expulsions have been carried out under Title 42, a rarely used provision of U.S. health law first invoked by President Trump and continued under President Biden to bar people from seeking asylum at the U.S.-Mexico border under the pretext of preventing COVID-19.

By denying Haitians and others the right to seek asylum, this use of Title 42 blatantly violates both international and U.S. law. It’s discrimination masquerading as a public health policy, and it’s only created more chaos at the border.

In November, a federal judge’s ruling confirmed as much by striking down Title 42, although what happens next remains to be seen. In another step forward, Biden recently extended temporary protected status for Haitians already in the U.S.

The U.S. has long served as a safe haven for the persecuted, but it must do more to treat all asylum seekers with respect and allow them to fully access the asylum process. The disparate treatment of refugees and asylum seekers also emphasizes the larger need for a more efficient, just, and inclusive U.S. immigration system.

This year’s record-breaking global displacement crisis calls for greater protections and investment by the international community instead of more indifference and cruelty. It demands humane policies anchored in respect and dignity for all people.