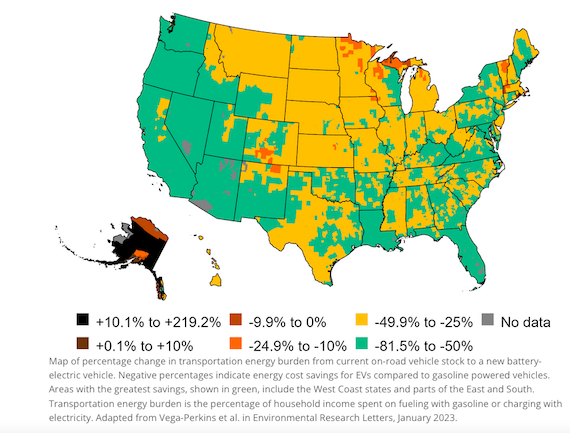 Ann Arbor (Informed Comment) – A new University of Michigan study has shown that today, 90% of Americans would see lower transportation costs and lower CO2 emissions if they switched from a car with an Internal Combustion Engine or ICE to an electric vehicle (EV). They were only looking at the cost of running a car, so they did not include the cost of buying an EV, which is anyway plummeting. A Chevy Bolt can be had for as little as $19,500 with the $7500 Biden tax credit.

Whatever you are spending on gasoline, you could on average be spending less than half that amount by driving electric, they say. EVs result in an average drop in transportation fuel costs of 55%. In some parts of the country, the scientists find, a family could save $600 a year on gasoline costs. If you figure most Americans keep a car for about 8 years, that’s a $4,800 savings. Although the study doesn’t mention it, that is on top of the $7,500 Biden tax credit. You buy a gasoline car for $26,000 and you get neither the tax credit nor the savings on gasoline.

The largest single source of carbon dioxide emissions in the US is transportation, which is responsible for 27% of those emissions. Passenger cars and trucks alone account for 16% of greenhouse gas output. Going green means electrifying transportation and running it off renewable energy sources.

The article, however, isn’t just about how better-off Americans can save more money. The authors are interested in social justice, and they conclude, sadly, that for about 10% of car owners, the cost of running their electric car would be as much as running a gasoline car.

In some states, like Hawaii, electricity costs are high, which affects the calculation. In some states where it is really cold in the winter, the electric car battery loses some efficiency. We get 260 miles on a charge in spring, summer and fall, but only 200 miles in the winter, here in southeast Michigan. If we were farther north, the fall-off might be even greater. Still, most car trips, remember, are only 5 miles, so unless you were commuting a really long way, the lesser winter battery range wouldn’t matter that much. The authors display a map that shows Michiganders still getting a 25% – 50% reduction in their transportion fuel costs with an electric vehicle.

Some states, like Pennsylvania and Michigan, still have a relatively dirty grid, so if you fill up from a utility, you might not get a big drop in carbon dioxide emissions. Other studies have shown that you would still see at least a 20% fall in your emissions with an EV, even in dirty grid states. We have solar panels at the house, so if we recharge during the daylight hours, we don’t use the dirty Michigan grid. Also that grid is getting cleaner quickly. Coal has dropped by half from some 60% of Michigan electricity to about a third, and by 2032 there won’t be any coal plants. Now, renewables only supply about 10% of Michigan electricity, but that percentage will quickly increase in coming years. As it does, it will allow EVs to avoid even more carbon emissions.

The long and the short of it is that if a family of limited means lives in a cold state with relatively high electricity costs or a dirty grid, their monetary and carbon savings from having an EV will be less.

Moreover, though these authors don’t say so, the poor have fewer chances of escaping a dirty state grid or high utility electricity costs by putting solar panels on their roofs than do the well off. They mostly live in apartment buildings.

The authors argue that we can’t just leave that 10% behind. We have to find ways of increasing the availability and decreasing the cost of public transportation, for instance, and states with cold winters and high electricity costs should move fastest and most extensively on that front.

I’d also like to suggest that states need to encourage landlords to allow solar panel coops in their buildings, so that apartment dwellers can get the benefit of inexpensive solar power. Apartment buildings also need to have fast chargers in the parking lot. In some states, it would be easy enough to pass legislation encouraging these developments.