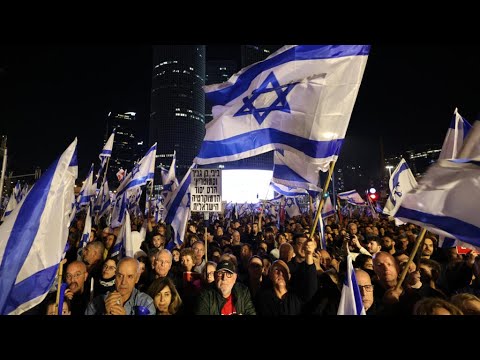 Ann Arbor (Informed Comment) – Some 110,000 Israelis protested Saturday night at two big rallies in Tel Aviv. So reports Al Jazeera. The larger of the two was attended by opposition politicians Yair Lapid and Benny Gantz. Lapid told Israeli radio, “We will defend the nation and democracy. We will not surrender before we reach victory.” They see the real possibility, I think of Israel declining into a seedy Middle Eastern dictatorship.

This is the third week in a row of these large demonstrations against the new Netanyahu government, which has pledged to pass legislation constricting the role of the judiciary and removing from it the role of legislative review. If these measures went into effect, the courts would be neutered and unable to declare laws unconstitutional for contravening Israel’s organic law. Courts may also be prevented from trying politicians still in office and from intervening against sitting politicians. The crowds in Tel Aviv fear that these pieces of legislation would spell the end of Israeli democracy– a democracy that still works for the 79% of Israeli citizens who are Jewish, though it routinely fails Israelis of Palestinian heritage and keeps 5 million occupied Palestinians under inhumane Apartheid conditions.

Netanyahu is on trial for corruption charges himself, which he would like to escape by declaring immunity from prosecution for sitting politicians.

The massive rallies come as Netanyahu faces a constitutional crisis, since the Supreme Court has ordered Netanyahu to fire his Moroccan-born Health and Interior Minister, Aryeh Makhlouf Deri. Deri, the leader of the Shas Party, which caters to Sephardi and Mizrahi (Eastern) ultra-Orthodox, was jailed for two years for taking a $150,000 bribe in the late 1990s and who was fined $50,000 on a 2018 tax evasion and money laundering charge. Deri avoided jail by giving the court the impression that he would retire from politics, rather than risk the judges branding him guilty of moral turpitude, which would have barred him from politics for another 7 years. The justices of the Supreme Court have called his attempt to reenter national politics at the top outrageous and have demanded he be excluded from the government. If he was so excluded, however, he might withdraw from the Netanyahu coalition, taking his 11 members of parliament with him, which would cause the government to fall and provoke new elections.

The legislation Netanyahu has in mind might well prevent the courts from taking a stand on such issues in the future.

Let us consider how the courts have largely also been sidelined from intervening against the executive or legislature in other Middle Eastern states.

In Turkey after the 2016 failed coup, President Tayyip Erdogan in Turkey sacked thousands of judges, often replacing them with young and inexperienced jurists. The government often reassigns judges mid-trial as a tactic to get the outcome it wants.

“Turkey is now categorized as a “competitive authoritarian” regime,1 where elections are held regularly but the competition among political parties is not free and fair. These regimes have ostensibly democratic elements: Opposition parties occasionally win or almost win elections; there is fierce political competition; the press may publish diverse opinions and statements by opposition parties; and citizens can organize protests.

However, upon closer inspection, cracks soon appear in the democratic facade: Opponents of the government are stifled via legal or illegal means; independent judicial bodies are controlled by pro-government officials; state funds are used for election campaigns without proper oversight; election rules are changed to favor the government and elections may even be rigged; and press freedom and freedom of expression come under pressure. When these measures fail to deliver an outcome that satisfies the ruling party, members of the opposition may face targeted violence or imprisonment.”

In Lebanon, the mandate of the Constitutional Council is very narrow and citizens cannot bring complaints.

Saudi courts in theory could strike down government policy initiatives if they contravened Islamic law. The country is, however, an absolute monarchy and no judge would tangle with the royal family.