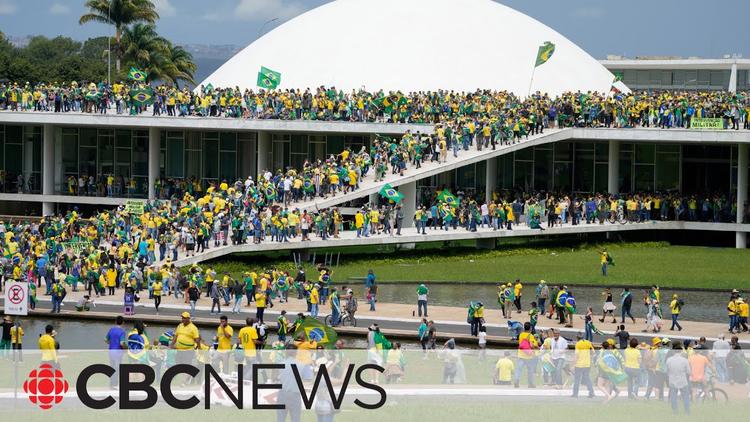 Ann Arbor (Informed Comment) – Luiz Inácio Lula da Silva, the president of Brazil, denounced the invasion of the national Congress and some ministry buildings in Brasilia on Sunday by a far right wing mob as “reprehensible and anti-democratic coup attempt by conservatives in Brazil, incited by the leaders of oligarchic power, its spokespersons and fanatics,” according to DW. The Biden administration also condemned any attempt to undermine democracy in Brazil, with Joe Biden calling the actions “outrageous.”

Police cleared the building later on Sunday. Rosa Weber, chief justice of the Brazilian Supreme Court, vowed Sunday evening to “make an example” of the “terrorists.” The rioters were partisans of former President Jair Bolsonaro, who at first accepted the results of the election but then reneged and claimed the polls were fraudulent. He left the country for Miami, which makes me think maybe the FBI should look into him for whether he has given material aid to acts of terrorism.

The Bolsonaro regime that Lula defeated in last fall’s polls was indeed an engine for rapacious businesses and oligarchs to rip people off, and to degrade the environment in order to make a quick buck. For people hungry to go on with this sort of barracuda capitalism and the profits it generates for the few, at enormous social cost, Lula’s return to power had been very bad news. He threatened a lot of interests by revoking, earlier this month, a decree of his predecessor creating layers of secrecy around some government and business activities. So of course the shadowy business interests threatened with transparency bought some mobs to interfere with the transition. Likewise, Bolsonaro was putting valuable state enterprises on the block to be sold to the oligarchs, and Lula reversed those plans, threatening the bonanza that vested interests had otherwise anticipated.

Just as an example of the interests that were threatened, consider the exploitation of the Amazon. Lula had signalled as hard as he could that protecting the Amazon rain forest is one of his highest priorities. On his first day in office on the 1st of this month, Lula issued six decrees, some of them aimed at reversing destructive policies by his predecessor, Bolsonaro, toward the Amazon.

Lula cancelled Pró-Mape. The climate denialist and predatory capitalist Bolsonaro had initiated this program, which had been designed to encourage what he called “artisanal mining,” Gabriel explains that in practice, this plan functioned to promote illegal mining on indigenous lands and in nature reserves. As a result, wildcat mining increased exponentially in native Brazilian areas among tribes such as the Yanomami and creating what Gabriel characterized as a crisis.

Lula brought back the Amazon Fund, restructured the National Environment Council, and struck down a Bolsonara measure that that hobbled the combat against illegal mining in the Amazon basin. He made the announcements when he swore in his new cabinet, according to Joao Gabriel at the Folha de S. Paolo

The Amazon Fund is donated to by, e.g. Norway to help fight deforestation, but the Bolsonaro government had crippled the fund by declining to appoint a governing council, without which the funds could not be disbursed. Given this obstructionism, Norway stopped donating. Now, however, they are back.

Lula’s action unleashes $600 million already available in the fund, and sets up the prospect for it to receive another $1 billion. That is big money aimed at stopping the illegal clearing of land for cattle ranching, stopping the wildcat mines, stopping the displacement of Brazil’s First Nations, and stopping billions of dollars from flowing into the bank accounts of the oligarchs.

And this is just one of the areas where Lula is planning to make big changes. As with the American oligarchs who are funding the new Far Right and Trumpism, in order to understand this phenomenon you have to follow the money. Climate denialism is not about mindless anti-science attitudes. It is about some narrow section of the population being denied the opportunity to make boatloads of money by screwing the rest of us, and the planet, over.