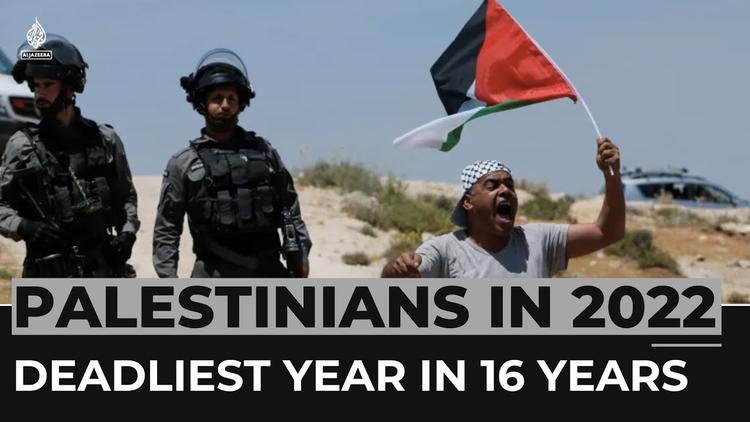 ( Middle East Monitor ) – Another critical year for Palestine has folded. While 2022 has wrought much of the same in terms of Israeli military occupation and increasing violence, it also introduced new variables to the Palestinian struggle – nationally, regionally and internationally.

Palestine, the War and the Arabs

The Russia-Ukraine War starting in February pressured many political entities, including Palestinians, to take sides or, at least, to declare a position. Though the Palestinian Authority (PA) and various Palestinian political parties insisted on their neutrality, Russia’s deviation from the US-led political paradigm in the Middle East opened up new margins for Palestinians to explore.

On 4 May, a delegation of Hamas leaders met Russian officials in Moscow, and, a few months later, PA leader Mahmoud Abbas defied Washington by holding a meeting with Russian President Vladmir Putin in Astana, Kazakhstan. Despite US anger at Abbas, Washington could do little to retaliate against the Palestinian leadership, considering the delicate geopolitical balances in the Middle East and around the world.

The new political spaces created by global conflict also brought greater cohesion to the Arab position on Palestine, as articulated in a statement by the pan-Arab organization, the Arab League, in Cairo on 29 November. Ahmed Aboul Gheit insisted on the Arab quest for a just peace and praised the ‘Algiers Declaration’ of the previous month. On 12-14 October Palestinian political groups met in Algeria, signed a reconciliation agreement based on ending division through presidential and parliamentary elections.

This was part of a year-long momentum where Arab governments revitalized their position in support of the Palestinians, both financially and politically through funding the Palestinian refugees agency, UNRWA, or supporting Palestine at the United Nations.

On 3 October, Arab representatives at the UN introduced Resolution A/C 1/77 L.2,  urging Israel to get rid of its nuclear weapons and to put “all its nuclear facilities under comprehensive International Atomic Energy Agency safeguards.” The Resolution was overwhelmingly approved by the United Nations General Assembly on 28 October.

Though no real action was taken by the UN to punish Israel for its ongoing military occupation and violations of Palestinian rights, several UN initiatives and resolutions continued to demonstrate the centrality of Palestine to the international agenda.

Last August, the ‘UN Experts’ condemned “Israel’s escalating attacks against Palestinian civil society in the occupied West Bank”, stating that these actions mount to severe suppression of human rights defenders and are illegal and unacceptable.”

In October, Francesca Albanese, the UN Special Rapporteur on the Situation of Human Rights in the Palestinian Territory occupied since 1967, submitted a report to the UNGA, where she concluded that the realization of the inalienable right of the Palestinian people to self-determination requires dismantling the Israeli settler-colonialism and apartheid regime.

On 30 November, the UNGA also adopted a resolution to mark Nakba Day, which commemorates the forced expulsion of hundreds of thousands of Palestinians from their lands in 1948.

Alas, none of these statements altered the violent nature of Israel’s attitude towards Palestinians. On 29 October, the UN Mideast envoy, Tor Wennesland, said that 2022 is on course to be the ‘deadliest year’ for Palestinians in the occupied West Bank since the UN started tracking fatalities in 2005.

Israeli Violence and the Lions’ Den

Israel has killed over 200 Palestinians in the occupied West Bank and Gaza throughout 2022, including 47 children. Only a few of them made headlines in mainstream media. However, the world still showed outrage following the cold blooded murder of famed Palestinian American journalist Shireen Abu Akleh on 11 May, while she was covering the tragic events in Jenin. Widespread calls for an impartial investigation finally convinced the FBI to open a criminal probe into Abu Akleh’s killing.

The Israeli killing spree was motivated by two reasons: first, the rise of armed resistance in the northern West Bank, and second, Israel’s chaotic political scene.

Continued Israeli attacks on Jenin, Nablus and other West Bank towns and refugee camps resulted in the formation of a new Palestinian armed group known as the Lions’ Den. Unlike other groups, the Nablus-based movement was non-factional, which created new spaces for national unity among all Palestinians, regardless of their political or ideological backgrounds.

The Israeli government quickly retaliated against the Lions’ Den. Israeli Defense Minister Benny Gantz belittled the group’s appeal on 13 October, announcing “Eventually, we will lay our hands on the terrorists”, estimating their number to be 30 fighters. “We will work out how to reach them and we will eliminate them,” Gantz said. The Israeli assessment has proven untrue as the brigade continued to grow, morphing into other brigades in Jenin, Al-Khalil (Hebron) and other West Bank regions.

The killing of Palestinian fighter Oday Tamimi in a clash near the illegal Jewish settlement of Maale Adumim on 19 October further accentuated the boldness of the new Palestinian generation of resisters. Moreover, the televised execution of Ammar Mufleh in the town of Huwara on 2 December also illustrated Israel’s willingness to flout international law to end the ongoing armed rebellion in occupied Palestine.

The Israeli violence is also directly linked to Tel Aviv’s own political crisis. Though Benjamin Netanyahu was ousted through an unlikely alliance among various Israeli political forces, which was led by former Prime Minister Naftali Bennett in June 2021, Israel’s longest-serving prime minister is slated for a comeback.

Bennett resigned from his post on 20 June, leaving the leadership to his coalition partner, Yair Lapid. New elections, the fifth in three years, were held on 1 November. This time around, Netanyahu’s rightwing coalition won by a comfortable margin, introducing to Israel’s already extremist government such notorious personalities as Bezalel Smotrich and Itamar Ben-Gvir, known for their violent action and rhetoric against Palestinians.

Though Washington had indicated on 2 November, that it will not be working directly with Ben-Gvir, the US Ambassador to Israel, Thomas Nides, seemed to reverse that position by declaring that “no one hurts the unbreakable ties between Israel and the United States.”

Keeping in mind that the increased violence in the West Bank was a direct result of the militant nature of the Bennet-Lapid government as it laboured to demonstrate its toughness against Palestinian Resistance, the new government is expected to be even more violent, setting the stage for a wider confrontation in both the West Bank and Gaza.

The brief but deadly Israeli war on the besieged Gaza Strip on 5 August resulted in the killing of at least 46 Palestinians and the injuring of at least 360, according to UN estimates. Despite the devastation resulting from the war, it could have been much worse, as not all Palestinian groups took part in the fighting and Israel seemed keen on ending its hostilities before a prolonged conflict resulted in a heavy political price. Netanyahu, too, is likely to resort to war on Gaza, should he need to create a distraction from future political difficulties or to keep his rightwing partners in line.

Despite the violence of the Israeli occupation and the hardship of isolation and siege, Palestinian culture continued to flourish with Palestinian artists, filmmakers, athletes, intellectuals and teachers continuing to leave their mark on the cultural scene in Palestine, in the Middle East and worldwide.

In May, Mohammed Hamada, a 20-year-old weightlifter from the Gaza Strip, became the first Palestinian athlete to win gold and bronze medals at the weightlifting world championships held in Heraklion, Greece.

In September, Palestinian-American systems engineer Nujoud Fahoum Merancy was appointed as one of the leaders of the Artemis missions, a program by NASA that aims to fly astronauts to the Moon.

Palestinian Resistance and cultural achievements are constantly boosted by growing international solidarity with Palestine. Thanks to the American Friends Service Committee (AFSC), multinational company General Mills announced in June that it is divesting entirely from Israel. This was one of many other achievements credited to the Palestine-led boycott movement, which included other companies, universities and churches.

However, nothing compares to the endless stream of solidarity exhibited by Arab and international football fans in the Qatar World Cup 2022, which started on 30 November. Although the Palestine national football team has not qualified for the world’s most important sports event, the flag of Palestine was the most visible among all other international flags. The iconic Palestinian Kufiyeh was also adorned by thousands of fans including world leaders, dignitaries and celebrities.

2022 was another year of tragedy and hope for the Palestinians. It is this hope, buoyed by numerous little victories, that makes the struggle for Palestinian freedom possible. One wishes that 2023 will be a better year.