That finding is alarming because the average surface temperature of the earth includes the oceans and Antarctica and the Himalayan mountains, i.e. freezing cold surfaces. So if the temperature has gone up 2F in 120 years it means even those places have heated up a bit, and it takes an enormous amount of extra energy to heat them. Extra energy, beyond what the earth routinely gets from the sun (which contrary to popular opinion does not vary that much over time). The source of this truly massive amount of extra energy is greenhouse gases in the atmosphere like carbon dioxide and methane, which trap more of the sun’s heat on earth rather than letting it radiate out into space as it used to do.

So 2022 was one of the hottest years for which we had mercury thermometers to measure temperature, beginning around 1880. It was so hot despite a cooling La Niña event.

This is what the temperature series looks like from 1880 to the present, according to NASA:

This graph is based a little differently than the WMO announcement, taking the average world temperature in 1950 as a baseline. You can see that the late nineteenth century was well below that baseline. But the past 8 years have been horrifyingly above it.

But the Intergovernmental Panel on Climate Change last year updated eminent climate scientist Michael Mann’s “Hockey Stick” graph. We have only been able directly to observe temperatures for a couple hundred years and it is only from the mid- to late 19th century that there were enough people recording temperatures around the world with mercury thermometers that you can meaningfully amalgamate the figures and reliably estimate average earth temperatures.

But scientists have various proxies for knowing how hot or cold the earth was before 1800. For one thing, the amount of carbon dioxide in the atmosphere tells you a lot about temperatures, and that can be known from tiny seashells that absorbed CO2. Scientists also can look at ice cores from the Arctic, e.g. So if you estimate temperatures going back to the time of Christ, the graph looks like this: 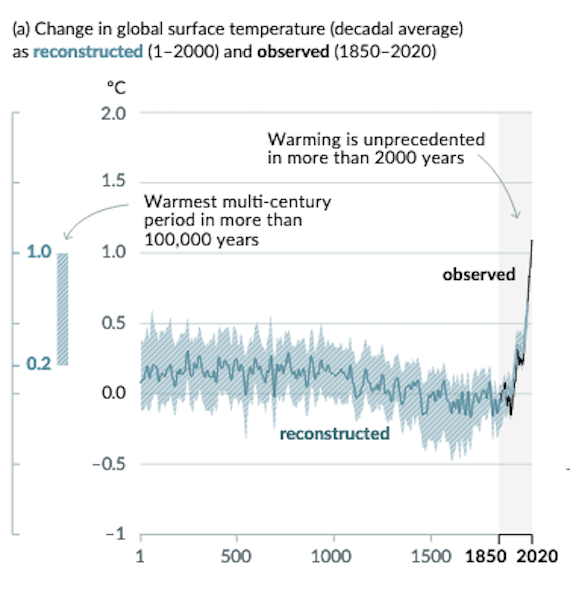 We are seriously changing our world, and not in a good way.

This steady boiling of the earth by our driving gasoline cars and burning coal and gas to heat buildings and make electricity is causing Twilight Zone events to pile up faster than we can even keep up with. In 2022 a mega-flood submerged a third of Pakistan and the Horn of Africa was desiccated by a long-term drought.

The WMO warns that only half the world’s 194 countries even have any contingency plans for extreme weather disasters, which are rapidly increasing in frequency and severity.

Not only that, but Europe had torrid weather for Christmas and New Year. I grew up in Europe, and I don’t remember it being warm at that time of year. Heck, I don’t remember it being warm in early June when my parents thought swimming lessons in Orleans would be a good idea and when I was turning practically blue and shivering. I always thought Vernon Duke and Yip Harburg, who wrote the song “April in Paris” in 1932, must never have been to Paris in April, which I remembered as a rainy, gloomy, chilly month there. Now my Parisian friends say it is actually nice, which goes to show that over the course of a century sometimes your mistakes get posthumously corrected by fate.

But if it goes to 120 degrees F. in the shade in Paris in April, then Vernon and Yip will have had only a fleeting victory.