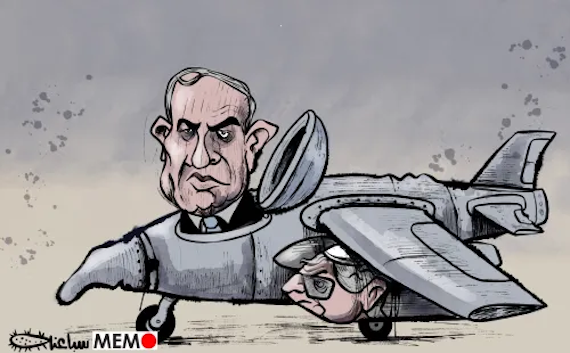 ( Middle East Monitor ) = Benjamin Netanyahu, the longest serving prime minister of Israel, built his entire career on confronting Iran. His argument is, Iran is building a nuclear weapon and its intent on using it against Israel and wiping out the Jewish people and he is the only person who can stop the genocide. After decades of Israeli propaganda, Iran has not built a nuclear weapon nor attacked Israel. However, Netanyahu continues with the same rhetoric.

Ironically, after all this demonisation of Iran, Netanyahu has built a government which seems very keen on making Israel a Jewish copy of Iran. His partners from the religious ultra-Orthodox parties, such as Bezalel Smotrich, made it very clear that their goal is to make Israel a state governed by the Torah and Jewish law.

In fact, more than half of the ministers of his government – 16 out of the 31 ministers – are from religious parties, such as Religious Zionism and Jewish Power, Netayahu’s own Likud party MKs are not exactly liberal, on the contrary they have strong inclinations towards the far right.

Indeed, Israel which was mainly built by Jewish European migrants, and always saw itself as an integral part of the more advanced Western civilisation, looks more and more like a Middle Eastern country; a highly militarised country, lacking political stability and social cohesion, deriving its existence and legitimacy from God Himself, with a ruler who has been ruling for decades.

Ben Caspit recently wrote in Al-Monitor: “Netanyahu is not known for being religious, not observing Kashrut dietary laws nor the Sabbath. He has never been spotted in tefillin (leather strips used in Jewish prayers). Netanyahu, a Western-educated, ostensibly secular realist, is now trapped in his new persona as messiah of a camp with which he has little in common.”

To appease his ultra-orthodox Jewish partners, Netanyahu is to amend the legislation which allows every Jew to get Israeli citizenship, and put more religious restrictions and laws redefining who is a Jew in first place, and therefore who is entitled to be an Israeli citizen. This will lead to a selective process in which only those who meet the ultra-orthodox parameters will be allowed in, and will also reduce the number of Jewish immigrants to Israel. It is a demographic plan to change the social makeup of Israel, by increasing the number of religious Jews who have big families, described by Netanyahu himself as an economic burden. This selective process will decrease the number of non-religious Jews, and will eventually enable religious Jews to permanently control every detail in the state.

In his speech to the Knesset, Netanyahu set three major objectives for his government; confronting Iran’s attempts to have nuclear weapons, improving infrastructure including building a bullet train and expanding normalisation agreements with Arab countries. Two objectives which he did not mention by which are in his new government’s guidelines are expanding illegal Jewish-only settlements in the occupied West Bank and stressing the state’s Jewish identity.

Many now question whether, under a religious government, expectant mothers will be able to get medical attention on a Saturday or whether the tourism industry will continue to operate on the Jewish Sabbath, when a pious Jew should not work instead dedicating time to worship.

Although Netanyahu put Iran as the top priority in his speech, the coalition guidelines put it as the sixth or seventh point, and instead stress plans to illegally strengthen Israel’s grip on the occupied Golan Heights, the West Bank and Jerusalem. They fail to mention the Palestinians. This reflects the real intentions of this government, which is basically usurping what is left of the West Bank through building more Jewish-only settlements, Judaising Jerusalem and achieving diplomatic relations with Arab countries.

Each and every minister in Netanyahu’s government; Yoav Galant, Bezalel Smotrich, Aryeh Deri, Itamar Ben-Gvir, Ofir Sofer, Miri Regev, Orit Strook … etc, has his or her own personal radical agenda for Israel. On Tuesday, Ben-Gvir stormed Al-Aqsa Mosque, causing angry reactions from the Arab and Muslim world. As a result of this criticism, Netanyahu cancelled a planned visit to the UAE.

Will the “most extreme government in the history of Israel” be able to function? What objectives will it achieve? How long will it last? Where is the region heading? These are the questions which we will see answered in the coming months.