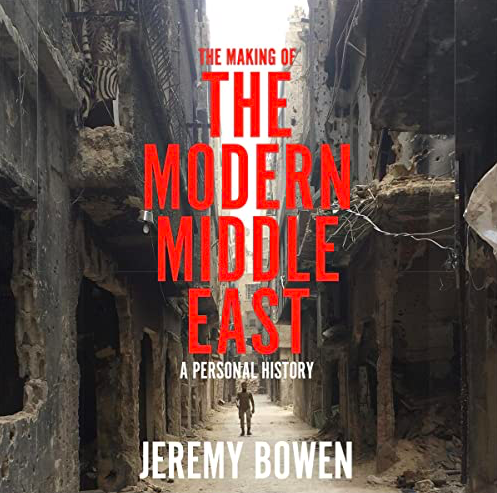 Review of Jeremy Bowen, The Making of the Modern Middle East: A Personal History (London: Picador, 2022).

Greifswald, Germany (Special to Informed Comment) – Ali Abdullah Saleh, Bashar al-Assad, Hassan Nasrallah, and Muammar Gaddafi are just some of the prominent figures in contemporary Middle Eastern history that Jeremy Bowen has had the opportunity to interview throughout his career. Bowen, a Welsh journalist for the BBC, has been covering the Middle East since 1989. It is actually with the withdrawal of Soviet troops from Afghanistan in February 1989 that Bowen begins his latest book, The Making of the Modern Middle East: A Personal History. The volume features a combination of personal memoirs and a general history of the Middle East during the last three decades. Bowen’s narrative covers, in a chronological fashion, the broad region, from Egypt to Afghanistan.

Bowen has witnessed first-hand the changes underwent by the Middle East in the last decades. He was the BBC Middle East correspondent based in Jerusalem from 1995 to 2000. Shortly after his arrival to the city, he covered the assassination of Yitzhak Rabin on November 4, 1995, for which he received a Royal Television Society award. Bowen explains in The Making of the Modern Middle East that he did not attend the speech that preceded Rabin’s death at the hands of Jewish extremist Yigal Amir. He had recently been producing many stories about the Palestinian-Israeli peace process and was hosting some journalist friends that night. Needless to say, the meeting broke off when news arrived that Rabin had been shot.

Being a war reporter is an essential job, as the journalist is able to shed some light into the midst of disinformation that surrounds conflict. But it is also a risky endeavor. It was at the end of his time as correspondent in Jerusalem, when the Israeli army was withdrawing from Lebanon in 2000, that Bowen saw a colleague die after being targeted by an Israeli tank. Abed Takkoush was Bowen’s fixer in Lebanon, acting as a driver and producer. When the British journalist decided to stop to record a piece with his cameraman at the border between Lebanon and Israel, Takkoush stayed in the car to call his son. The Israeli tank hit the back of the car, which quickly caught fire. When Bowen tried to come back to help Takkoush, the Israeli soldiers fired at him. In an official statement, the Israeli army described what happened as ”a tragic accident” and argued that the tank crew feared a Hezbollah attack and believed the BBC’s tripod and camera was actually an antitank missile launcher.[1]

In 2005, Bowen was appointed as BBC Middle East editor, a position that had just been established and that he would hold until 2022, when he became the International Editor of BBC News. In 2007, he was subjected to pressure by pro-Israeli US and British lobby groups after he wrote a piece for the BCC website on the fortieth anniversary of the 1967 Six-Day War. This was a topic he had written about in his first book, published in 2003 and titled Six Days: How the 1967 War Shaped the Middle East. In the BCC piece, Bowen argued that Zionism has an “innate instinct to push out the frontier” and explained that Israel was “in defiance of everyone’s interpretation of international law except its own.”[2] Unfortunately enough, the BBC Trust —the governing body of the British Broadcasting Corporation between 2007 and 2017— ruled that these comments were unqualified and imprecise. Bowen’s piece can still be read but has been slightly altered.

The book format, away from his traditional BBC reporting, allows Bowen to express in The Making of the Modern Middle East his personal assessments regarding some of the major events in the Middle East. His views are motivated by experiences he shares with few other observers. For instance, Bowen describes the invasion of Iraq as a “catastrophic error” and goes on to explain what happened when British Prime Minister Tony Blair made a triumphalist visit to the Iraqi city of Basra in 2003. Bowen asked Blair about the weapons of mass destruction Saddam Hussein had allegedly been amassing. The prime minister reacted by looking at the British journalist for a moment and walking away without having provided an answer. That was a time when Ken Adelman, a high-ranking diplomat during the Reagan administration, still felt confident to describe the US invasion of Iraq as a ‘cakewalk’.

The Making of the Modern Middle East has a circular structure. In the last chapter, Bowen reflects on the past three decades and recounts how, 32 years after he covered the Soviet Union’s departure from Afghanistan, he returned to the country in 2021 when the Taliban had already taken over Kabul. The British journalist argues that there were significant gains in education and equality after the US deposed the Taliban in 2001. The problem, however, was that the progress Afghanistan had made depended on a state riddled by corruption and its foreign supporters. As Shadi Hamid, a senior fellow at the Brookings Institution, has argued, “in the end, few Afghans believed in a government that they never felt was theirs or wished to wade through its bureaucratic red tape.”[3]

The Making of the Modern Middle East is a go-to book for would-be journalists, or anyone interested in the work of an international correspondent. When Bowen published his book War Stories in 2006, journalist Ian Burrell defined it as “a primer for learning the techniques and the risks of modern war-reporting.”[4] The same can be said about Bowen’s latest book. In The Making of the Modern Middle East, the author does not explicitly present lessons on journalism, but through Bowen’s recounting of his experiences we learn about the importance of ethics and risk assessment in the work of a war reporter. Those familiar with the recent history of the Middle East may find Bowen’s general description of some main historical events somewhat redundant, but the author’s personal anecdotes represent a significant added value.

For years, international news desks and foreign correspondents have been suffering from dwindling economic resources. And, according to Robert Mahoney, deputy executive director of the press freedom organization Committee to Protect Journalists, “COVID-19 has only accelerated that deterioration.”[5] Although certainly important for the work of modern newsrooms, the reporting of international news cannot only draw on official press releases and the work of news agencies. Otherwise, we risk being kept in the dark. In The Making of the Modern Middle East, Jeremy Bowen provides us with a much-needed reminder that on-the ground reporting of international events remains as important as ever.