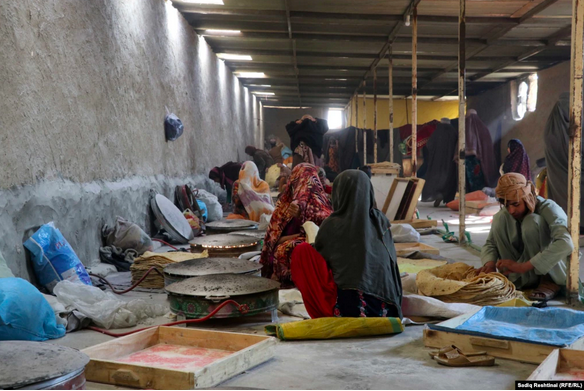 ( RFE/RL ) – Fahima witnessed many of her rights and freedoms disappear in 2022 as the Taliban imposed sweeping restrictions on Afghan women.

An aid worker in Afghanistan’s southern province of Uruzgan, Fahima was employed in one of the few fields that the militant group had permitted women to work in.

But the 26-year-old lost her livelihood last month when the Taliban banned all local and foreign nongovernmental organizations from employing Afghan women.

“How will we survive?” Fahima, who earned $200 per month, told RFE/RL’s Radio Azadi. “I was the sole breadwinner for my family. After this ban, I don’t know what we will eat.”

The Taliban’s latest ban came at the end of a year in which the hard-line Islamists intensified their assault on women’s rights, including their right to work outside their homes and receive an education.

Days earlier, women were dealt another major blow after the Taliban banned female students from all state and private universities. Women had previously been allowed to attend university, although they had to observe gender segregation and a strict dress code.

“I sacrificed everything — leisure, food, and rest to get through medical school,” Meena Hasanzai, a university student in Kabul, told Radio Azadi. “I can do nothing but weep now.”

During 2022, the Taliban also banned women from gyms and public bathhouses and parks. Women were also ordered to cover their faces in public as the militants resurrected their notorious morality police, who enforce the Taliban’s religious edicts.

Rights campaigners have accused the Taliban of trying to erase women from public life and imprison them in their homes. The militant group’s draconian restrictions have made Afghanistan the most repressive country for women in the world, they say.

Mariam Atash, an Afghan-American lawyer and women’s rights campaigner, said the Taliban’s curbs on women are “unjust, un-Islamic, and immoral” and “amount to gender apartheid worse than any place on Earth today.”

Observers have said the Taliban’s severe limits on women working outside their homes will also exacerbate the devastating economic and humanitarian crisis in Afghanistan, which is grappling with mass unemployment and soaring inflation as well as widespread hunger and disease.

“The Taliban’s restrictions against women and girls are devastating, and they have grave impacts on Afghan society,” said Zaman Sultani, Amnesty International’s South Asia regional researcher.

Fatima, a widow in Uruzgan, told Radio Azadi that she is at a “complete loss.”

“I don’t know what to do,” said the mother of three, who ekes out a living by cleaning people’s homes. “They have imposed these bans without even considering our problems.”

Activists have warned that the Taliban is likely to further erode women’s rights in the year ahead as the group reestablishes its brutal regime of the 1990s.

During its first stint in power from 1996 to 2001, the Taliban imposed a complete ban on female education, strictly forbid women from leaving their homes without a male relative, and forced them to wear the all-encompassing burqa in public.

“The situation is gravely concerning,” said Sultani. “The Taliban has nearly restored all the draconian rules that they had enforced against women and girls back in the 1990s.”

WATCH: Women across Afghanistan continue to oppose recent bans by the Taliban on education and employment opportunities for females. Male professors and university students have also protested against the increased restrictions on women in higher education.