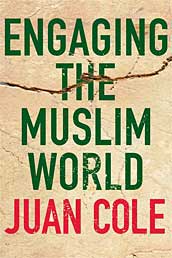 With regard to my argument in Engaging the Muslim World that the Iraq War was fomented by an unusual alliance of oil interests (Dick Cheney) and Neoconservative Zionists, M. J. Rosenberg gets it. I’ll be interested to know if Philip Weiss still disagrees once he has had a chance to see the full argument with the footnotes.

Speaking of the Israel lobbies, , John Mearsheimer weighs in on the significance of l’affaire Chas Freeman. He sees a more robust debate about such matters enabled by blogging and the internet, and finds it positive. The changed atmosphere in Washington is also indicated by the cold shoulder Obama administration officials gave Gen. Gabi Ashkenazi, the Israeli army chief of staff, on his recent visit for the purpose of warning against Iran’s alleged nuclear threat. .

Thanks to Saskia Sassen for her entry in the discussion over at TPM Book Cafe on Engaging the Muslim World. She is a sociologist at Columbia University and the London School of Economics, and coined the term “global city.”

‘As I was reading not only the post but also some items in Cole’s book it struck me that we are seeing a new frontier emerge in the encounter (not clash!!) of the US and the larger muslim world. Let me say that this is not the language Cole uses. This is me working off some of his history of the present.

I want to emphasize the formation of a frontier zone -a no man’s land where the rules of engagement are not established, and where those who interact may bring very different notions about rules of engagement. Each historical frontier is specific -whether the “Far West” of the old Americas, or my argument that today’s global cities are a post-colonial frontier space. And so is this emergent frontier zone between the US and the Muslim world, a frontier that spans the globe, involving yes, Iraq and Afghanistan and other critical countries in the US “War against Terror”, and all kinds of other countries who have participated in one way or another in the fighting of the last several years. But this frontier space also consists of thick localizations in cities and neighborhoods in the US, and in several European countries, and beyond. ‘

Her idea of a fluid and world-spanning frontier where the US encounters the Muslim world has a great deal to recommend it. I was struck when I first read about the US colonization of the Philippines how much it was an extension of the Old West. Many of the same army units involved in the Indian wars, many of the political figures concerned with the situation at the Western frontier, ended up in Manila. The first major US military encounter with Muslim fighters in modern history was there. Psy-ops against Muslim opponents using humiliation and pork products were pioneered then and later forgotten. When George W. Bush spoke of how he envied the US troops in Afghanistan the “romance” of their endeavor, you wonder if he was also thinking of the Old West and the games of his childhood (as Tom Engelhardt suggested)..

But Sasken takes the discussion in a different direction, a contemporary one, a post-colonial one. Just as Spock played three-dimensional chess in Star Trek, Sasken sees a multi-level encounter between the US and various forms of Muslim challenge to its hegemony, playing out in great cities such as Baghdad and Qandahar, but also London and Paris.