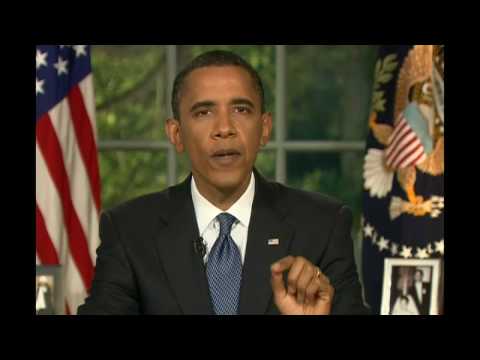 President Obama for the first time addressed the nation from the Oval Office on Tuesday evening, on the Gulf of Mexico oil volcano.

The address came as scientists revised upward their estimate of how much petroleum is daily gushing into the Gulf, deciding it is between 35,000 and 60,000. Only 18,000 barrels a day is currently being captured, i.e. between a half and a fourth of what is spewing out.

In his speech, Obama pledged that BP would set up a special fund to compensate victims of the oil tsunami now assaulting the shores of the US along the Gulf of Mexico. He promised that BP and the US government efforts to clean up the oil and said he would set up a long-term Gulf Recovery program.

But beyond clean-up, Obama seized the moment to push for a fundamental reconsideration of the nation’s approach to transportation (petroleum in the US is mainly used to fuel automobiles and other vehicles). ITN has video:

The full transcript is here.

Obama insisted that there is a role for government both in regulating the petroleum corporations and in being a “catalyst” for jump-starting green energy companies, as China has. Presumably he is speaking of tax breaks, ease of obtaining loans, and other incentives. He compared a government crash program to enable green energy to putting a man on the moon.

In that part of his speech, the words of John F. Kennedy echoed in my mind:

‘ We choose to go to the moon. We choose to go to the moon in this decade and do the other things, not because they are easy, but because they are hard, because that goal will serve to organize and measure the best of our energies and skills, because that challenge is one that we are willing to accept, one we are unwilling to postpone, and one which we intend to win, and the others, too. It is for these reasons that I regard the decision last year to shift our efforts in space from low to high gear as among the most important decisions that will be made during my incumbency in the office of the Presidency.

As Obama pointed out, Kennedy faced his naysayers and doubters, just as green energy advocates do today.

Obama is entirely correct that government intervention is needed if we are to get a relatively quick and smooth transition to green energy, which which Greenpeace now estimates could be accomplished by 2050 with an investment of $7 trillion (beyond the $11 trillion the world will have to spend to keep power flowing to tomorrow’s bigger population at today’s rates).

But we need more than targeted, temporary tax breaks from the federal government. We need permanent tax breaks across the board for green energy companies, and we need federally backed loan programs.

As I argued yesterday, it would be helpful if the government stopped its massive overt and hidden subsidies for petroleum. In fact, Senator Bernie Sanders (my hero) is proposing an end to $35 billion in oil and gas tax breaks. But you wonder if Sander’s bill has a chance in a Congress so heavily indebted to Big Oil. Unless Obama can change the incentive structure in favor of green energy, his chances of success are slim.

Pro-active government tax breaks and other incentives for alternative energy are also highly desirable, as Germany has demonstrated. I was interested to discover that insurance was offered on wind turbines to encourage skittish companies to buy them. In the European Union as a whole, new wind energy generation has equaled or surpassed energy produced by new natural gas plants in recent years, as a result. In the US,
New Jersey is trying to make it easier for wind turbine companies to get loans. While the Obama administration gave out $3.2 billion in tax breaks to green firms last winter, these tax credits are temporary. I ask myself why.

Some American cities are not waiting for the Federal government. My neighbor, Toledo, Ohio, has developed a partnership of academics, businesses, workers and the city government to turn the place into a major solar equipment production hub.

But solar is lagging in the US, in large part because the federal government has not created a favorable environment for its growth (it produces less that 1% of America’s energy at the moment).

Toledo shouldn’t have to do this alone, folks. Lets help them, and let us use the federal government to do it.