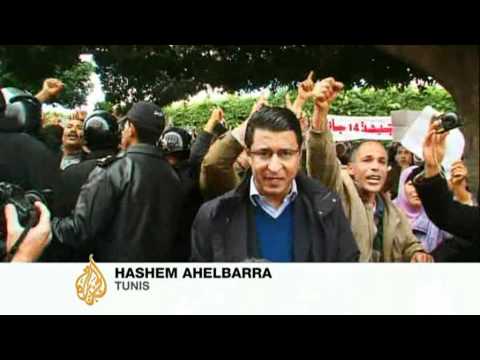 Signs that the Tunisia story is by no means over emerged this weekend. Protests continued in Tunis and elsewhere against the interim prime minister, Mohamed Ghannouchi and the president, Fouad Mebazaa, on grounds that they were part of the ruling Rally for Constitutional Democracy.

The crowds wanted nothing to do with close associates of deposed dictator Zine el-Abedine Ben Ali.

Aljazeera English reports on a demonstration mounted by thousands of police in downtown Tunis. They insisted that they are innocent and that they had just gone along with the orders of their superiors, who are the ones who should be punished.

Meanwhile, in rural towns the General Union of Tunisian Workers organized people to rally and walk toward Tunis to demand that Ghannouchi and Mebazaa step down. Some 500 members of the ‘Freedom Caravan’ set off from Manzil Bouzian Saturday night. Aljazeera is reporting that some of these protesters living elsewhere in Tunisia begain arriving in the capital Sunday morning–only about 1,000 of them. See also the BBC.

Small demonstrations in emulation of Tunisia were held Saturday in Algeria and in Yemen. The one in Algeria turned violent, with dozens wounded by security forces attempting to interdict it.

Having already abolished the so-called ‘Ministry of Information’ and pre-publication censorship, the Tunisian Customs administration announced Saturday that imported books, magazines, CDs, films, and other electronic media would forthwith be exempt from any requirement that the importer receive prior permission to bring them in. When I was in Tunisia a few years ago I went around looking for Arabic bookstores. Mostly I just found little stationaries with a small stock of slim books by Tunisian authors– mostly novellas as I remember. I saw an enormous Western-style book store brimming with French books, and it seemed to me that the Ben Ali regime was carefully limiting access to Arabic books for the literate middle and working classes, but was giving the Francophone educated upper middle class access to a much wider range of literature (presumably on the theory– mistaken, as it turned out– that this cosmopolitan class was anyway on the regime’s side).

The idea of books and videos just flowing into an Arab country with no let or hindrance is breathtaking (even Lebanon censors, and its censorship may be getting worse.) On the other hand, the Tunisian government will keep in place internet filters, which are after all a form of censorship.